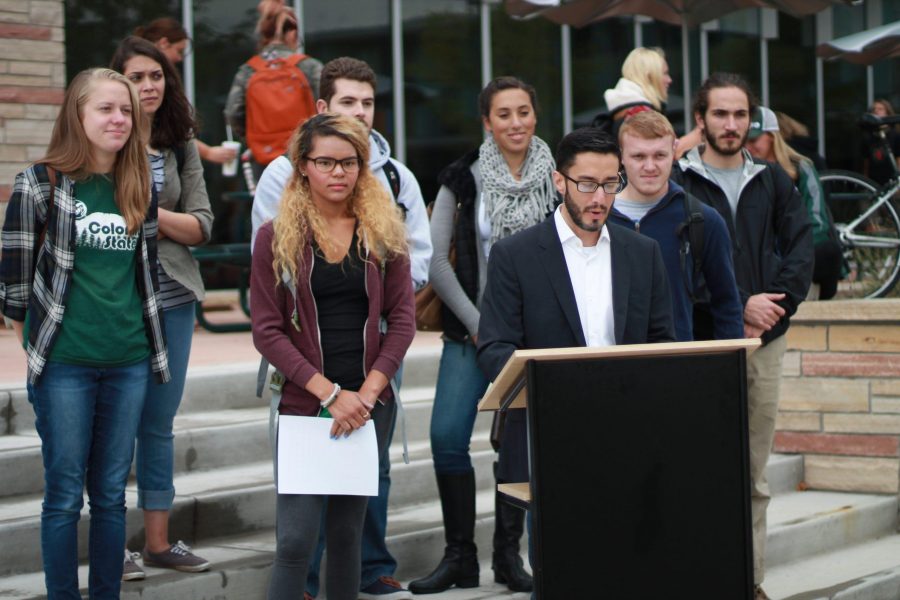 The Chair of Colorado Democratic Party, Rick Palacio, held a press conference on campus yesterday with a small group of CSU students to speak about the upcoming Senate election.

“(Glenn’s) extreme policies show how he is out of touch and wrong for Colorado students,” Palacio said.

Palacio cited Glenn’s support of abolishing the Department of Education to claim that Glenn would “really set us back when it comes to students who rely on loans and Pell grants.”

According to Glenn’s campaign website, Glenn does not want to cut “one dime out of education,” but wants to take control of education from the federal government.

Students in support of the Democratic Party spoke out against this plan.

“Without federal student loans I would not be able to go to school,” said Asia Kawamura, a freshman psychology student. “They allow me to focus on my education… Darryl Glenn does not speak for me as a student.”

Anna Porter, a senior political science student, spoke about the importance for Americans to have access to higher education.

“I wouldn’t be able to attend college without my Pell grant,” Porter said. “It has helped me with rent, textbooks, tuition and food.”

In a June Denver Post article, Glenn said that he wants to “better educate” college students on the risks of high student debt and help college students find alternatives to taking out student loans. Glenn said he does not believe the federal government has a responsibility to help students with debt.

Members of the CSU College Republicans group were not present at the press conference yesterday, but questioned whether Bennet would actually benefit college students.

“Sen. Bennet has actively voted against legislation that would have made college more affordable for CSU students,” sociology junior Caspian Banki wrote in an e-mail to the Collegian. “Darryl Glenn…has a vision of economic prosperity for all students who are willing to take on the financial burden of pursuing a degree in higher education.”

As of Aug. 18, a survey of likely Colorado voters showed Bennet leading by 16 percentage points, according to the Denver Business Journal.

“The issue of college affordability is at the forefront of every CSU’s student’s mind during this upcoming election,” Banki wrote.