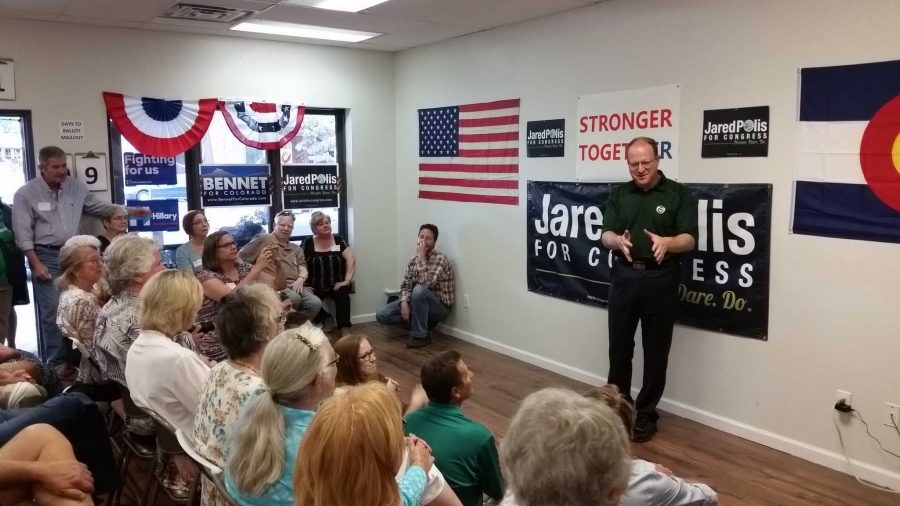 Congressman Jared Polis attended the opening of the Fort Collins coordinated campaign headquarters. Campaign signs for Michael Bennet and Polis can be seen, while the representative stands in front of a Clinton campaign sign which reads, "Stronger Together." (Erik Petrovich / Collegian)

House Rep. Jared Polis, D-CO, visited Fort Collins Wednesday to speak to a crowd of high school and incoming CSU students who were involved in the TRiO, a program that aims to improve access to higher education for students from low-income families.

Polis also revealed his thoughts on his campaign opponent, Nicholas Morse, and spoke about Darryl Glenn, the republican candidate for Sen. Michael Bennet’s seat in the United States Senate. Glenn has been a strong supporter of presumptive GOP presidential nominee Donald Trump.

While in Fort Collins, Polis also attended the opening of a new democratic campaign headquarters in Old Town.

One student, who asked to remain anonymous, said TRiO offered her the chance to become the first person to attend a university in her family.

“Growing up the way we did, for example, my mom cleans houses,” said the Junior, who attends Poudre High School, on what made her choose to attend college. “That’s not the best job, and my whole life she’s said, ‘You’re gonna go to college so you don’t have to work like I do.'”

Polis reminded the audience that the TRiO programs are funded almost entirely by the federal government, and spoke on his disappointment in the recent supreme court decision to not uphold the Obama administration’s plan to defend illegal immigrants from deportation and how it could affect many families who benefit from the programs.

Democratic Colorado State Sen. John Kefalas, Polis, two candidates for the Larimer County Commissioner office and other state democratic party figures were present at the kick-off of the new headquarters.

“We are certainly going to be pushing really hard to make a lot of phone calls, go to a lot of doors and do a lot of voter registration to let people know who Jared is and the incredible work he’s done,” said Annalyse Escobar, the Fort Collins regional coordinating director for the Colorado democratic party. “It will probably come down to a close margin.”

Polis welcomed the republican nomination of Darryl Glenn for Bennet’s contested seat in the U.S. Senate, but had thoughts on the candidate’s longtime support of Donald Trump.

Kefalas did not comment on Morse due to a “lack of research.” The state senator said he did not know much about Glenn’s policy standpoints, but had issues with certain aspects of his campaign.

“I have a lot of concerns about Trump, Sarah Palin, and Ted Cruz,” Kefalas said. “If (Glenn) is indeed endorsing their ideologies, that is a cause for concern.”