The Rocky Mountain Collegian • May 9, 2016 • https://collegian.com/articles/news/2016/05/game-day-experience-committee-plans-parking-transportation-and-tailgating-for-on-campus-stadium/ 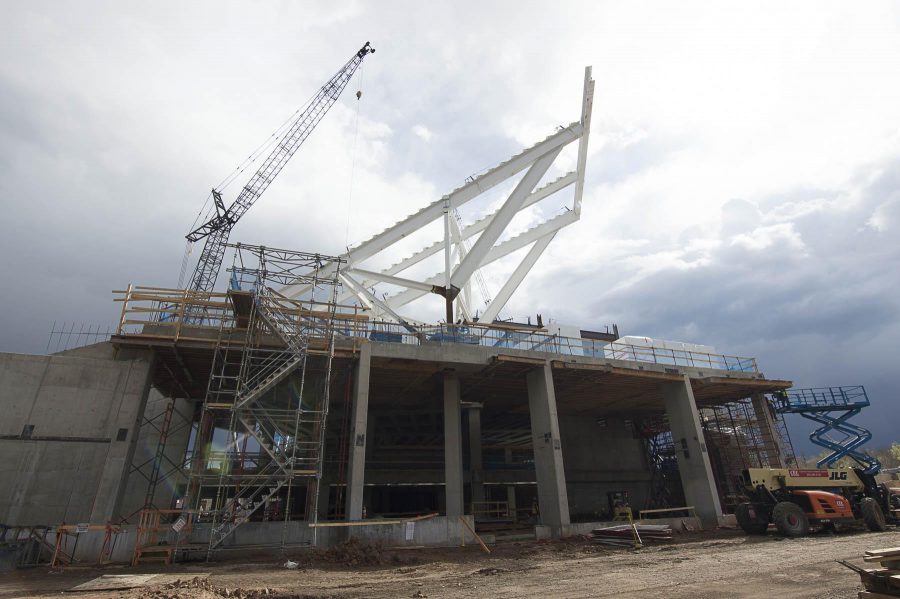 While many questions remained unanswered, the preliminary game-day plan for the 2017 on-campus stadium includes a re-park program for on-campus residents, increased transit service and programmed tailgating.

The game day experience committee has been engaged in discussions with key stakeholders on campus for the past year. Through these discussions, the committee has developed the framework for game day, said David Hansen, university landscape architect for Facilities Management.

“It’s taking what has come out of all of these meetings verbally and putting it on paper to see how game day could operate,” Hansen said.

According to the plan, nearly all of the on-campus parking lots will be dedicated to game day parking. On-campus residents will have to move to one of three designated lots prior to the game: either the northwest Westfall lot, the lot near the trial gardens between Lake and Pitkin streets, or the tennis court’s lot, which is south of the main campus near Centre Avenue. On-campus residents will be guaranteed a parking space once the vehicle is moved, according to the plan.

When the plan was presented to the Associated Students of Colorado State University on April 20, student representatives requested “some sort of compensation” for on-campus residents who will have to move their vehicle on game day. Fred Haberecht, university planner, said this was not previously considered.

“At the end of the day, what other options are there?” said Andy Schafer, ASCSU representative on the game-day committee. “Obviously, there’s somewhat of a partiality towards the patrons that will be attending the game. Speaking as a student representative, I disagree based on the amount of outcry. But, I think one thing to keep in mind is that by the fourth year, 2021, this will be the way it’s always been done.”

The deadline of which on-campus residents will have to move their car before the game has not yet been determined. Hansen said that while this plan heavily affects on-campus residents, it also affects faculty, staff and students parking on campus during game day, since typically, on-campus are unenforced during the weekend.

Out of the available 11,500 parking spaces on the main campus, 4 percent will be reserved for non-game day parking. According to the game day plan, these 500 spaces will require some sort of parking permit on the day of the game, but Hansen said the system for these permits has not been developed.

Proportion of parking on game day:

The price for game-day parking permits will correlate to its proximity to the stadium, but price points have not been determined, according to Doug Max, the senior associate athletics director for facilities management. Revenue from game-day parking will go to the athletics department and the game day management service.

The game day plan includes expansion of alternative transportation services, such as the Max and The Horn, but the exact hours and frequency the buses will run is yet to be decided. According to Hansen, CSU is working with the city of Fort Collins to develop the transportation plan and extend bus services, particularly on Elizabeth Street. Transfort is also considering working with other municipalities to bring in extra buses from Loveland or Greeley, Hansen said.

Traffic is a concern for the city and the University, particularly on Shields. Immediately after the game, the committee expects 20 percent more traffic on Shields than typical peak hours.

The committee is also considering a “bike valet,” where riders could drop off their bike before the game near the Chemistry building, and pick it up afterwards like a coat check, Hansen said.

“This is not all figured out, and come the first game it still won’t be,” Hansen said. “We’re going to have to live and learn through the first couple of games. Right now, we’re taking our best educated guess.”

The plan also includes programmed tailgating areas. Student tailgating will be located near the lagoon. Schaffer expects that students will be allowed to consume alcohol in this area, but the enforcement for underage drinking has not yet been determined. According to Schaffer, managing alcohol consumption on game day is a conversation that is “beginning to be held now.”

Schaffer said he successfully received a grant of about $35,000 to fix the ground water problem on the west lawn of the Lory Student Center in order to expand the space for student tailgating. A concert stage will be set up in the southeast corner of Plum and Meridian in the trees near the Lagoon.

“It’s our wish that the environment on campus will thrive (on game day),” Max said. “We want (game day) to be a place of energy and excitement. I’m a big believer in multi-generational (engagement). I like the idea of getting people together, whether it’s grandpa or a professor, having them come and enjoy the experience. Athletics brings people together.”

To develop the preliminary plan for game day, the committee visited other universities with a relatively new on-campus stadium, such as Boise State, Max said. However, Max said the on-campus game day experience should be, “the Colorado State way.”

Currently, the game day committee is gathering input from key stakeholders on and off campus regarding the framework of the plan. A neighborhood meeting will be held from 6 to 8 p.m. May 9, at the Drake Centre.

“The stadium is being built,” Schafer said. “The conversation now is not yes or no on the stadium, it’s how we want to facilitate game day. I don’t think students are really grasping that. Students really do have the opportunity to have an impact on this, but I don’t think they’re leveraging their position as well as they could be.”

Collegian reporter Erin Douglas can be reached at news@collegian.com or on twitter @erinmdouglas23.