The Rocky Mountain Collegian • May 2, 2016 • https://collegian.com/articles/news/2016/05/emotional-support-animals-and-service-dogs-easing-life-for-those-who-need-a-companion/

Emotional support animals and service dogs: easing life for those who need a companion 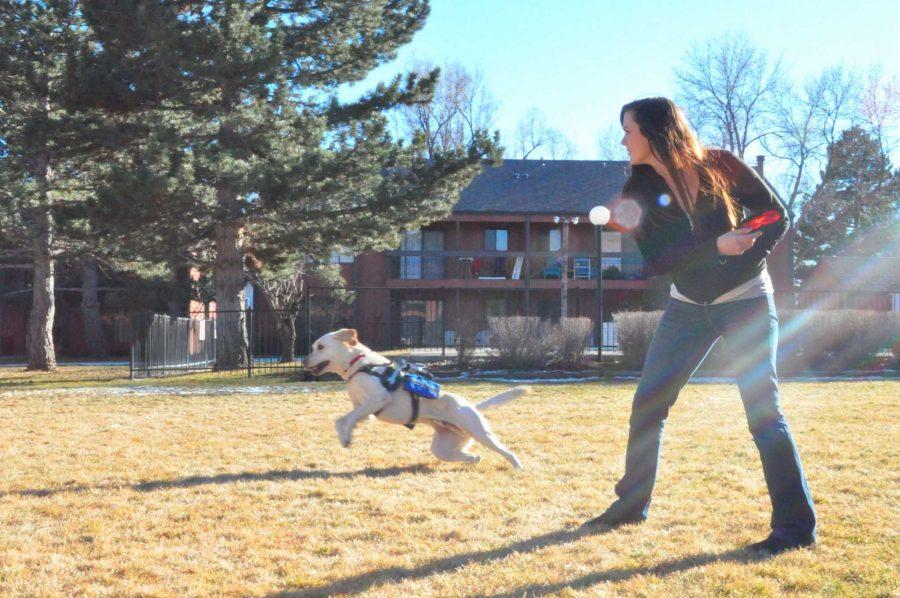 HDFS major, Christine Flahive, takes the time to play with her service dog, Marley. It is important for service pets to be off duty every once in a while to enjoy playing outside. Marley isn't allowed to be touched by other people because he can pick up on too many scents and it can prevent him from helping Christine with her seizures. (Bianca Torrez/Collegian)

Freshman Laely Munroe shares a two-person dorm room with two other roommates, by choice. Her first roommate is studying equine science, and her second is not a student, nor has any aspirations to be one.

Munroe’s second roommate, Kena, is a five-pound blond-haired chihuahua who serves as her support animal.

For Munroe, having an emotional support animal has made pursuing education at Colorado State a possibility. She had difficulty transitioning to college life and was feeling depressed. That’s when the one-year-old chihuahua came into play.

“I came from a really small school. My graduating class was only 49 people, so coming to this new environment was really overwhelming, and she just mellows me out,” Munroe said.

“There is confusion on both sides,” said Kathleen Ivy, a Resources for Disabled Students specialist. “There is confusion on the side of University personnel not knowing when and how they can ask questions, and so sometimes they question someone who has a legitimate dog. I’ve been questioned with my dog, and sometimes they allow things to happen that shouldn’t be allowed to happen because of the confusion.”

One the biggest sources of confusion stems from the terminology. There are two main categories for animals who provide support and services to their owners: service animals and emotional support animals.

The Americans with Disabilities Act defines a service animal as “a dog that is individually trained to do work or perform tasks for a person with a disability.”

The most commonly-known service animal is a seeing-eye dog, which helps individuals with vision impairment navigate day-to-day life. Other examples include hearing dogs, seizure alert and response dogs and brace and balance dogs.

The act, established in 1990, gives individuals with special needs the ability to own and use service animals and ensures them equal opportunities. The act forbids discrimination against individuals with disabilities involving the workforce, education, public transportation and access to public places.

Like service animals, emotional support animals can fulfill a variety of needs for the person they are serving. Besides providing a source of companionship and comfort, they help people struggling with anxiety, depression, post-traumatic stress disorder and a variety of other physiological struggles.

For example, emotional support animals have been helping individuals with autism.

“For people on the autism spectrum, it helps with socializing and grounding. It helps bring them from their interior world out into the exterior world,” said Ivy, a Resources for Disabled Students specialist.

Emotional support animals also provide comfort to those with fears of leaving the safety of their own home.

“(The animal) gives the person a feeling of safety and allows them to leave their dwelling without having a panic attack,” Ivy said.

Emotional support animals are protected by amendments in the Fair Housing Act.

The Fair Housing Act, which was established in 1968 as Title Eight in the Civil Rights Act, protects against discrimination of individuals looking to find housing based on their ethnicity, sex or religion. In 1988, amendments were added that extended protection to people with a disability.

“The Fair Housing Act says that property owners or managers, which (the University) Housing and Dining Services qualify as property owners or mangers, need to be flexible with regards to any pet policies or regulations that would allow someone more equal access and use of a dwelling,” said John Malsam, assistant director for administration for Housing and Dining Services and Residence Life. “If it’s regarded as some place for someone to live or a dwelling, then we need to be accommodating.”

The legislature requires accommodation and consideration for specific individuals, but there is a difference between animals providing a service, whether emotional or physical support, and pets. While these animals bond and build relationships with their owners, they are not pets.

Because emotional support animals and service dogs are not pets, they can be allowed into places animals would otherwise not be allowed, but they first must be documented and approved.

This was not an exception for freshman Laely Munroe and her emotional support dog Kena.

Monroe worked with staff at Resources for Disabled Students on campus to get approval, which required presenting doctors’ notes, proving the recommendation for an emotional support animal and an evaluation of the dog.

Having Kena has helped Munroe deal with emotional challenges, as well as improve life for the residents in her hall by allowing others to interact and play with her dog.

“She’s not only an emotional support for me, but she makes everyone in my halls’ life better,” Munroe said.

Ivy, like Munroe, has benefited from the help of a dog. Her dog, Duncan, a black standard poodle and golden retriever mix, is a service animal that provides balance and support while walking from place to place. He helps steady his owner and keeps her walking in a straight path.

Duncan went through two years of training, which included basic obedience training as well as working with two specialists to learn how to serve Ivy. In return, she learned how to be consistent and partner with Duncan. Their partnership has also formed an emotional bond, which makes life better for both of them.

“He improves my life in every way,” Ivy said.

Animals have the power to improve a person’s life and provide a variety of services, but there are limitations regarding animals on campus.

Emotional support animals living in on-campus housing, as well as service animals living on campus and going to class, must be registered through Resources for Disabled Students.

With the exception of fish in the residence halls, animals are not allowed in buildings on campus. People may walk their dogs on campus as long as the dog is on a leash, free of rabies and completely under the control of his or her owner.  While some students may find this rule excessive, pets may cause harm to service animals. An overly-aggressive dog may endanger or distract specially-trained dogs.

“A seeing-eye dog that has been trained for years can be ruined by another dog attacking it, and it’s a big concern,” Ivy said.

Replacing a fully-trained seeing-eye dog can cost upwards of $35,000 and takes years of training.

Unlike a pet, a service animal is there to provide a service. It is important that the animal is respected and given space. Some service animals wear vests inscribed with “do not pet” or “ask to pet.” The animal’s owner should always be asked before someone attempts to approach or pet the animal.

Weighing the Pros and Cons

In terms of emotional support and service animals in the residence halls, problems have been minimal.

“Generally speaking, I think the students who have the animals need them and are handling ownership and management of the animals appropriately,” Malsam said.

That being said, he realizes that there is always a chance for students to cheat the system and bring an animal into the halls without having a legitimate need.

“I think that any time there’s a policy in place, there’s going to be someone out there who may want to use it to their advantage or abuse it to behave in such a way that is contrary to the policy,” Malsam said.

For both Malsam and Ivy, the benefits of allowing students with specific needs to have animals to meet those needs outweighs the potential for misuse and abuse of the rules.

“The main drawback I see is the confusion around this because it is complicated, but I do think the benefit outweighs the drawback,” Ivy said.

The University believes in helping foster an individual’s success and realizes that emotional service animals make a difference.

“We are all complicated people,” Malsam said. “If there are ways that we can have good services, supports and information that can help students be more successful here, then that’s a good thing.”

Collegian Reporter Nicole Towne can be reached at news@collegian.com or on Twitter @nicole_towne21.