UPDATE: Voting minimum may have been reached to ratify constitution, unofficial 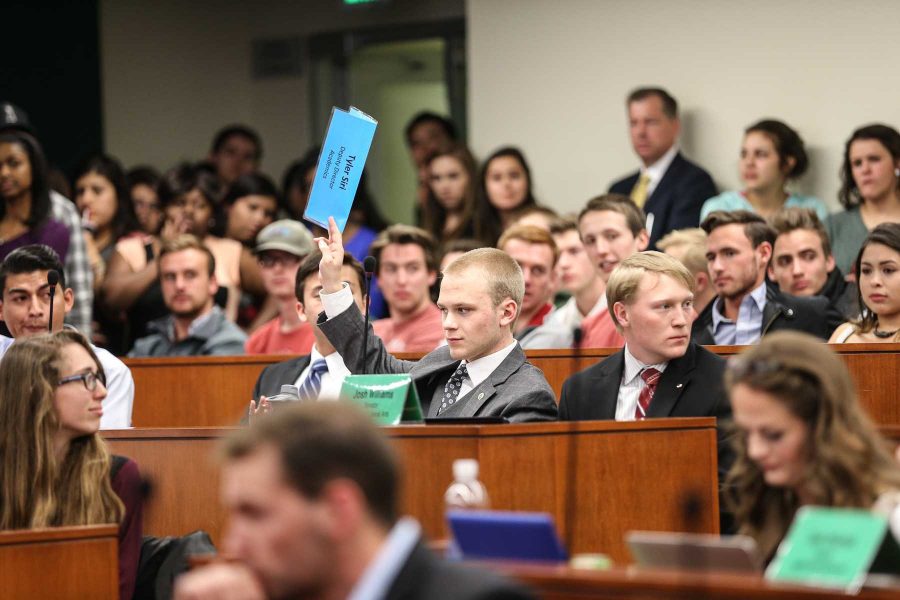 ASCSU senate and gallery before the number of people in the gallery forced the session to move to a ballroom. Photo by Abbie Parr

Update 4:30 p.m. Wednesday: According to sources in the ASCSU elections committee, the organization has, “narrowly avoided the constitutional crisis.”

The Associated Students of Colorado State University’s constitution requires at least 10 percent of the student population vote to approve any amendments made to the constitution throughout the year. On Tuesday, only 4.92 percent of the student body had voted, about half of the turnout at the same time last year. The organization needed 3,423 votes in order to ratify this year’s constitution, which included the highly-debated Diversity Amendment. Voting is now closed.

Official voter turnout numbers are expected to be released this evening, with the announcement of the 2016-2017 ASCSU president. Follow the Collegian on twitter @CSUCollegian for live election results tonight.

Voter turnout for the Associated Students of Colorado State University election has been historically low this year, and article 10, section 1,000 of the ASCSU Constitution requires 10 percent of the student population to vote during the spring election in order for the amendments throughout the year to be considered valid.

As of 5 p.m. Tuesday, voter turnout was 1,496, according to Edward Kendall. At only 4.92 percent, the voter turnout is well below the needed 3,423 votes to pass the Constitution.

If the Constitution is not passed, any amendments the ASCSU Senate body made this year would be invalid, including the Diversity Bill, a highly-debated amendment that would create Senate seats for student representatives of diversity offices and other historically underrepresented groups on campus.

Students have until 4 p.m. today to cast votes on RamWeb or in the Lory Student Center. The voting booth in the LSC opens at 9 a.m. and closes at 3 p.m. Students who vote in the LSC will receive free water bottles and t-shirts. Voting on RamWeb can be accessed in the upper righthand corner after logging in by clicking on the “alerts” tab.

While the ASCSU Constitution mandates that 10 percent of the student body ratify the Constitution for it to be considered valid, it does not make a similar requirement for presidential or Senate elections, and therefore no reelection will be held. If the 10-percent turnout is not reached, ASCSU will revert to the previous year’s Constitution, which was ratified by the student body last spring.

Though voter turnout was low last year, 4,018 students voted. At 16.32 percent of the student body, the turnout was well over the necessary 10 percent to ratify the Constitution.

Collegian ASCSU Reporter Erin Douglas can be reached at news@collegian.com or on Twitter @erinmdouglas23.