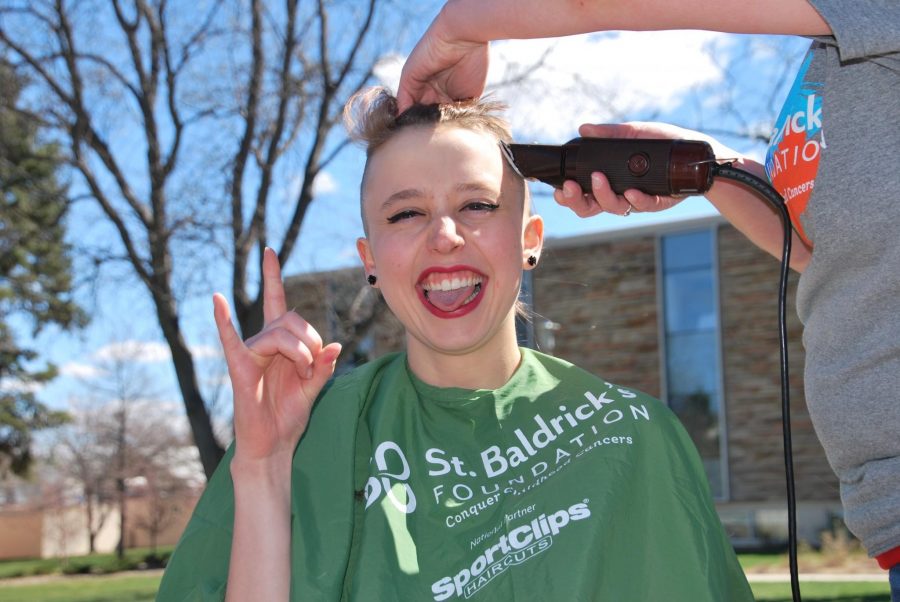 On April Fool’s Day, about 50 men and women each took their turn under the barber’s cape to have their heads shaved completely bald. Far from a joke, however, were these charitable acts to raise awareness of childhood cancer and raise money for cures.

The head-shaving event, part of the St. Baldrick’s Foundation’s nationwide network of similar fundraisers, took place on the Monfort Quad with an expected turnout of about 50 people, said Sarah Stirling, an event coordinator and member of the service fraternity Alpha Phi Omega. This number includes both pre-registered participants and walk-ups.

The event was organized by freshman psychology major Matt Worden, who made strong connections with St. Baldrick’s while still in high school.

“My cousin was diagnosed with leukemia when she was five years old,” Worden said. “My uncle did some research about childhood cancer foundations and found that St. Baldrick’s was probably … his favorite choice. I absolutely loved it. I wanted to be a part of it, I wanted to help organize it, I wanted to just do more in the organization besides shave my head and raise money, only to find out that they didn’t do it in my high school. So I said, ‘Screw it — I’ll do it.'”

After successfully organizing St. Baldrick’s events at his high school, Worden, now a member of the Phi Kappa Theta fraternity, brought his dedication to CSU.

“It’s just — I love the feeling of shaving my head and raising money for something greater than I can ever think of,” Worden said.

Barbers and hair stylists from Floyd’s Barber Shop volunteered at the event to assist with the shaving.

“We always are looking for anything to do, to just get out and work with the community — anything we can do,” said Brandi Kenders of Floyd’s Barber Shop. “So, any opportunity we can get, we jump on it. … Anything for a good cause.”

Though Worden’s cousin has been considered cured for about five to eight years, he maintains his dedication to the St. Baldrick’s Foundation in order to help other families who are going through similar hardships as his did.

“I mean, all this money goes to finding cures for childhood cancers,” Worden said. “It’s something that, if we can avoid putting other families through what my family and others around me have gone through, that’s all that matters.”

Collegian Reporter Julia Rentsch can be reached at news@collegian.com or on Twitter @julia_rentsch.