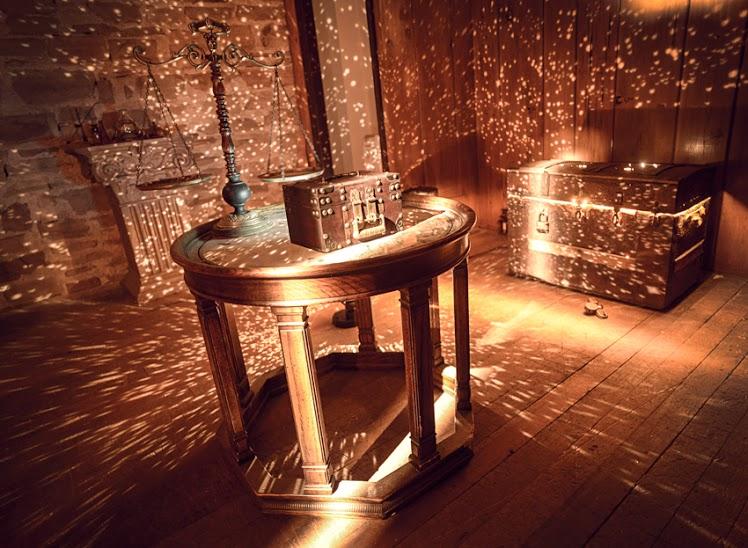 The Somewhere Secret tasks people with solving puzzles to lead to a treasure map. (Photo by Cori Storb)

Inside one of the historic buildings of Fort Collins is a puzzle escape-style game that allows players to access a map to a hidden treasure in Colorado.

Somewhere Secret is an escape room-inspired game with an interactive environment that challenges players to solve a series of tasks, puzzles and mysteries in a small group of people. Two to eight people go inside a room for an hour to solve the puzzles and tasks to ultimately unlock a map to a treasure hidden somewhere in Colorado. The time is measured by an hourglass inside of the room and the music. Once the hourglass runs out and the music stops, the game is over.

Since December of 2015, around 300 people have played the game. Only about 40 have unlocked the map. The game was created by Cori Storb and her business partner Marc Durant.

Storb, the designer of the game, said she was inspired by the first time she went on a treasure hunt.

“I think there should be more treasure hunts in the world, and then I’m a really creative person, but I’m always doing, like, a million projects at once,” Storb said. “So this is kind of the combination of a million small projects linked together. So every different puzzle was something that was really fun for me to figure out. Then, when you sequence them all together, it gets more meaningful.”

Somewhere Secret is located in the Merchant Room, above Walnut Creek vintage and boutique goods market. The game is donation-based, with a recommended donation of $25 per person. After the game, players can pay what they feel the game is worth.

While Storb got inspiration from escape rooms, players are not locked inside of the room and can leave at any point in the game for those who feel claustrophobic. There is also more story integrated throughout the entire game.

“I really like the interactive aspect — that’s probably one of my favorite parts,” Martinson said. “When you are playing on the computer, you only have a mouse, but here you actually got to physically touch everything, and in fact, we were encouraged to do so.”

The game requires advance registration. Registration can be done on www.somewheresecret.com or by calling (970) 235-1199.