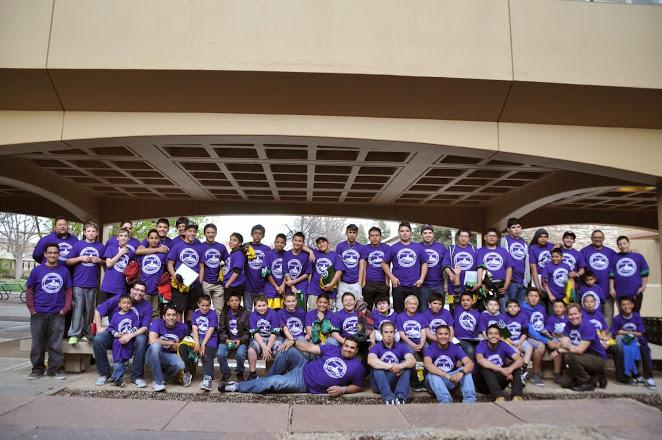 Male middle-school students from the Northern Colorado area are encouraged to participate in the program so they can understand that college or any type of higher education is available to anyone and everyone, no matter what background a person comes from.

“The conference is based around bringing students of color and those who come from hard backgrounds in the Fort Collins and Loveland communities to get exposure of CSU and to see what campus is like,” said James Calabaza, a senior animal science major and the chapter president of the Sigma Lambda Beta.

Jesse Ramirez and his pledge class of 1999 created “Los Manos” as a youth leadership conference that would impact generations to come.

“We came up with the name Los Manos because we wanted to pay tribute to the guys who brought Sigma Lambda Beta to CSU’s campus,” Ramirez said. “They were the first to bring a Latino fraternity to CSU and also the entire state of Colorado.”

Sigma Lambda Beta has come a long way since it started the program at CSU. They have expanded it to include a similar program at almost all of the fraternity chapters in Colorado.

“What’s cool is that ever since the program’s creation in 2001, almost every Beta chapter on Colorado university campuses does a youth outreach program like Los Manos,” Ramirez said.

Chapter advisor Dan Banuelos also works in the Access Center on CSU’s campus to make students aware that higher education is available to everyone. He has facilitated previous workshops in the Los Manos conference, one being called “overcoming obstacles.”

“The main idea of the workshop is to talk about the symbolism of life and how some people are not always privileged enough to begin at the starting line,” Banuelos said. “We start to talk about how students throw in the towel and give up trying to go to college, so I tell them the ways to get there.”

Banuelos hopes for the impact of this conference to break the poverty cycle and provide an emphasis on the importance of higher education to middle school students from hard backgrounds.

“They (the students) come on campus, they play games with college students and then they walk away with a great impression (of college),” said Banuelos.

Middle school students are the main attendants of the conference because they are young enough to be impacted by the program, and are at the crucial age where they decide if they want to try to go to college, Banuelos said.

“We serve as role models and positive impacts to our community in Fort Collins and also outside of that,” Calabaza said. “Since we are here we want them (the students) to see that image of how our impact here at CSU can change their idea of if they want to go to college or not.”

With the extension of schools involved in the conference to be not only from Fort Collins but also Loveland, Calabaza hopes for around 80 students to be in attendance of the conference Saturday.

“Our mission is to empower youth to let them know that college or any institution is open to them,” Calabaza said.

Collegian Reporter Savannah Hoag can be reached at news@collegian.com or via Twitter @sav_hoag.