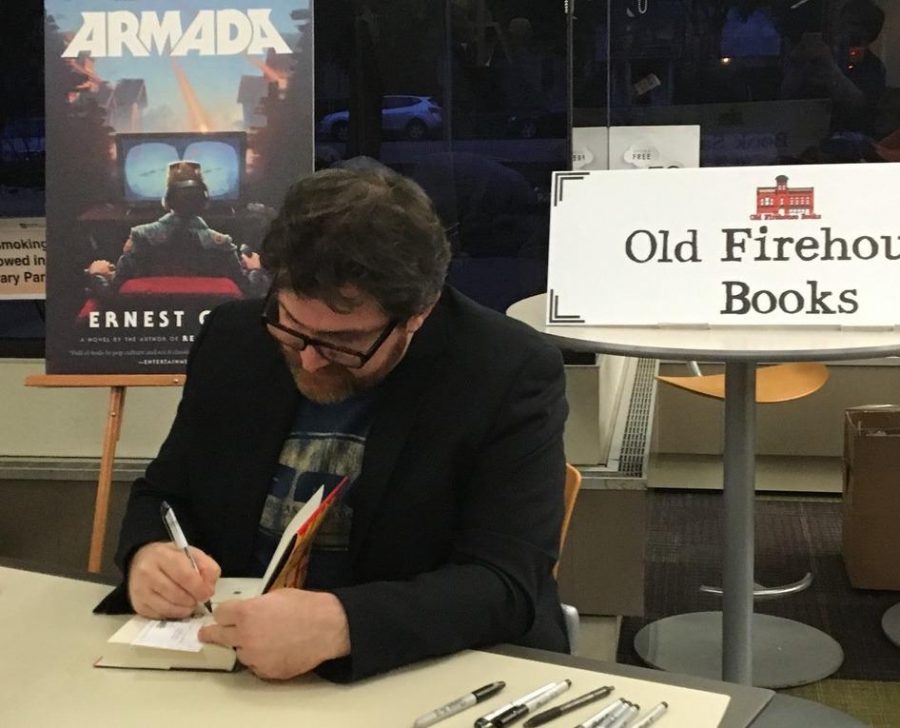 Ernest Cline is an author, screenwriter and a self-proclaimed full-time nerd.

Both of his books are not only New York Times best-sellers, but are in the works to be adapted into movies. His book “Ready Player One” will be adapted into a movie by Warner Bros. and directed by Steven Spielberg, while his second novel to be turned into a movie, “Armada”, will be produced by Universal pictures.

The following interview has been edited for clarity and length.

Your novel “Ready Player One” explores a lot of implications about virtual reality and the future of technology. What are your thoughts on the emergence of VR technology like the Oculus Rift?

It blows my mind that I actually have virtual reality goggles at home now because when I was writing “Ready Player One,” you know that was just five, six years ago and it was still science fiction, and now six years later it’s actually become about. I’ve been kind of waiting my whole life for virtual reality to come about and it seems like technology has finally caught up with the idea.

I think it’s going to change the way we watch the news and record graduations, and weddings and even watch movies. Everything, video games, everything is being composed for a two-dimensional window, up until now. Now we’re going to compose for the entire field of human vision, 360 degrees. I’ve demoed already so much of it, and I can tell it’s going to change everything just in the next few years, you know, and we’re right here in the early phases of it.

Both your books have tons of pop culture references, particularly from the 80’s. What is it about that era that not only appeals to you, but to other audiences?

Well, I think part of it is that it was kind of a golden age for movies and video games, and it was the dawn for a whole new era. The late 70’s and early 80’s, when I grew up, I was part of the first generation to have home video game consoles. The first game I ever played came out in 1978.

Then also, VCR. Until that time, it was just whatever was on television and whatever was at your local cinema, but once we got a VCR, I could watch the entire kind of library of cinema up to that point from all around the world.

The ’80s is the decade that set us on the path to where we are now. Throughout my lifetime I’ve seen the internet come into existence and evolve from this thing only a few people knew about to something we are all now tethered to. You know, you have a handheld computer that can connect you to a global network of information and the entire kind of amassed catalog of human knowledge at your fingertips and media and any kind of movie or music video. All of it is accessible – that’s a big broad leap from my lifetime.

When I was writing “Ready Player One”, I think that was kind of what I was trying to celebrate: the dawn of video games, the dawn of home computing and the dawn of the internet and what’s known as modern geek culture.

What are some topics that you haven’t explored in your books that you would like to explore?

It’s hard to say. I have a coming of age story that I have been kicking around in the back of my head for some time. I’ve grown up loving movies like American Grafitti and Crossing the Bridge, and books like Catcher in the Rye.

I think every writer has some story in them about their experience growing up, and for me that was during that time that I described, playing my first video games and seeing Star Wars for the first time, dialing out on a home computer or a modem and connecting to another computer and talking to someone over a computer for the first time, all happening in my teenage years, along with all the things everybody goes through, you know, going to school and developing your worldview and learning about the opposite sex.

But I’m lucky – since I write fiction, I can kind of write about whatever I am interested in at the time and squeeze that into the story.

How do you deal with the pressure of making good content?

You know, that’s something new for me. When I was writing Ready Player One, it was my first novel and I was just writing it to see if I could write a novel, see if I could finish and write something that was entertaining to me. I have to write a story that is interesting to me and engaging to me at the time that I’m writing and just try to please myself, and then hope that the people with a similar sensibility will enjoy it.

Just the pressure of writing well and making yourself happy is enough pressure without the thought of trying to please the whole world, or please Hollywood, or please millions of fans. So I try not to think about it, and put it out of my head and trust that I’ve already achieved more success as a writer than I ever imagined, and I never imagined getting to be a full-time writer and that seems ensured. I have enough fans now that enjoy my first two books that can help me make a living just writing here on out. Anything beyond that is just a bonus round.

You became friends with George R.R. Martin. Did you learning anything from him?

He and I kind of developed a friendship during  the time I was writing my second novel. Since the first one was successful, I was under a lot of pressure, and I remember talking with him and he asked me “how’s your second novel coming?” and I was like “ah, so much pressure, everybody wants me to finish as soon as possible.”

I had forgotten for a minute who I was talking to, because he is one of the most successful and popular writers in the world right now, because of the Game of Thrones television show. But it wasn’t always that way for him. For the bulk of his career he was just a regular writer and he had a fan base, but it wasn’t millions and millions of people in every country all around the world. It wasn’t until he achieved this outstanding international success that all this pressure started to land on him and then the TV show became so popular, one of the, if not the, most popular television show in the world.

So he’s under more pressure than he’s ever been, but you can only write so fast and you can only get yourself up so much before it starts to interfere with your writing process.

What are your thoughts on the new Star Wars?

I think it’s so much fun and awesome. I went and saw it opening day. I bought the blu-ray when it came out last week and watched it a bunch of times. I’m still a huge Star Wars fan, and Star Wars played a big role in inspiring writing my second novel, and I have been waiting since 1983 to see Han, Luke, Leia and Chewbacca all together in a movie. I was 11 years old the last time that happened, and now I’m 44 and it’s happened again.

I think it’s that way for a whole generation, like Star Wars is the mythology of my youth, and it has been for my whole generation, which is why it is like the third most successful movie of all time. There’s so much nostalgia there, but also just pure fun and escapist adventure.

Collegian Assistant News Editor Seth Bodine can be reached at news@collegian.com or on Twitter at @sbodine120.