Humans of CSU: The light of the city 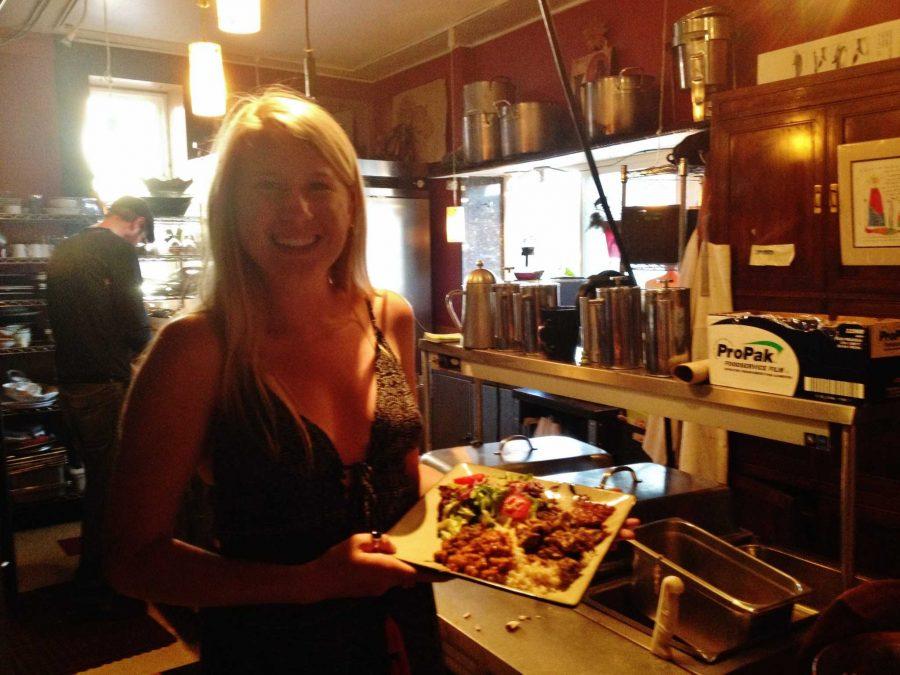 I feel like college has changed me so much in a lot of really beautiful, beautiful ways–all ways that I’m very happy with. I think I’ve definitely grown a lot as a person and become more able to recognize my flaws, but at the same time, become much more confident in who I am and what I want to do and how I hold myself.

I love it here (in Fort Collins). It was the best decision ever. I started out here and I lived in a Live Green community my freshman year, so it was a bunch of sustainability-minded students living on a floor together. Three of the people I live with now are three of the people I lived with on that hall. They’re like my best friends in the entire world.

I started off in Fort Collins with this really strong community, and I love that you can go to a school of 30,000, but you can make it. You can find those best friends who have similar interests. I think it’s really unique to be able to find such beautiful, loving communities that just want to support you and help you grow.

I volunteered as a cultural mentor and I still technically do, so I did that for three years at the end of May, working with international students who are partnered with graduate students who are coming from foreign countries. We email with them over the summer and then we help with orientation and plan activities. I’ve done salsa nights and a Valentine’s party.

Most of my international friends are from India. Most of my friends are from Maharashtra, so they speak Marathi. Krutheeka, she’s from south India, so she speaks Telugu, and Tamil, I think. I have a fair amount of Ugandan friends from studying abroad in Uganda, and here I’ve met a bunch of different Africans. Hanna is one of them. I consider her one of my closest friends. Despite the fact that she’s like 24 years older than me, she’s one of my absolute best friends.

I came in (to Raska) like two years ago, my sophomore year. I just started asking a lot of questions. (Hanna) and I were talking about it the other day, and she was like, “I’ll never forget when I met you for the first time,” because I just apparently sat there, and I remember I said, “Where are you from? Why are you doing this?” I kind of got a very brief version of her life story while I was sitting there, and she was like, “I never forgot you.” I was really interested in what she was doing and why she was here. I think people’s stories are interesting. But then I just kept coming back over the last few years. With my parents, she’d be like, “Your daughter is the light of the city. She should run for president,” and all these funny things. Just last semester, I started coming in pretty regularly. I came in once and just sat for like five hours and she told me a lot more about herself and we just became friends. I started volunteering and now I’m working here. I have a family at Raska. It’s more than a place I work. It’s my family.

I just like learning about people. I think it’s so much fun. You know everyone has these ridiculous, cool, awesome stories that you would never know without talking to them. I think why I really like meeting people is you just learn so much about different people. It’s almost like travelling. If you meet somebody new and they have all these different experiences, even if they’re from the same state as you or the same city or go to the same school, everyone is themselves because of different things that have happened to them. I think it’s really interesting to learn about those.

Most (CSU) international students are either Saudi, Indian or Chinese. And most of the cultural mentors I work with through that program are either American or Indian. Amol and I have gone salsa dancing every Tuesday for like two years, and so we’ve taken a group of international students either three or four times to teach them how to dance, which has been super fun because it’s such a mixture of cultures, like so many different layers. (You’re in) Fort Collins, then you go salsa dancing where you’ve got that Latin, and then the Indian cultural mentor that’s teaching a bunch of Chinese students–it’s just a lot of cultural layers, which is fun. We got to see that you can just do something together and you’re all the same, even though you’re really different.

I think (of all) my travels, like when I went to Bangladesh in 2012–that was really pivotal. That was high school. It was a program funded through the U.S. Department of State hosted by a nonprofit that chose 30 youth to go, so that was really life-changing. I think Uganda was very pivotal in what I want to do long-term and what I want to do after graduation. I think without that experience, I’d be a lot more lost.

(I’m majoring in) economics with minors in international development studies and global environmental sustainability….I started off being very interested in the environment and sustainability, and I still am and I still think it’s important, but I think my passions have most definitely shifted more toward social sustainability and the humanity sides of issues. I’m really interested in public health issues, specifically reproductive health and maternal health for women. Even more specifically, I think sexual health education is really important and really not emphasized enough anywhere in the world. I’d like to do stuff with sex ed in the States, or I think in sub-Saharan Africa—there’s also a bunch of other reproductive health issues there. I’m also interested in HIV/AIDS and access to contraception, which I suppose goes with sex ed, but it basically all comes down to reproductive health. But it’s not in my degree by any means. My public health interest comes from studying abroad in Africa, in Uganda. I was sick there so much. I had malaria, and then had four or five rounds of antibiotics for other issues that went with that, so I spent a lot of time at the hospitals.

For part of the program, we did public health, so I got to visit hospitals and learn about different (non-governmental organizations) doing aid relief. I met a few people in the group that were really passionate about public health. I read Tracy Kidder’s book about Paul Farmer, “Mountains Beyond Mountains” I read that in Uganda, and so that was also a very pivotal point. I thought that was really interesting. It just really got me excited.

What I love about travelling, and not even travelling, but living in foreign places … it pushes you out of your comfort zone, it forces you to be independent, realize your flaws, realize your strengths and deal with them. At the same time … you can just feel the humanity in the world. You have faith in humanity because you’re travelling alone, and I have met so many amazing people in India and Uganda just because I was there. If you want to talk to a friend and you don’t have a friend because you’re travelling alone, you have to either talk to somebody or not. It really forces you, I think, to really grow as a person. Bangladesh taught me that, Uganda reinforced it. It’s just something that I continue to try to strive to do: push myself outside of that comfort zone so that I can grow. Otherwise, you’re not going to. You’re never going to grow if you’re comfortable, I don’t think.

I grew up with a really strong support system–very outgoing, loud, funny, gregarious family–so I think that even when I was shy as a kid, it was something I was surrounded by–people who are smart and funny and caring and passionate. Then I was bullied in seventh grade pretty badly… But I think that (also) ultimately really made me who I am, because I really did have to learn what being alone was like and how to stand up for myself. Then I joined the debate team in high school. That got me really interested in being smart, a smart girl. They told me, “I want to become a powerful, smart woman when I grow up,” and that’s what I want to be.