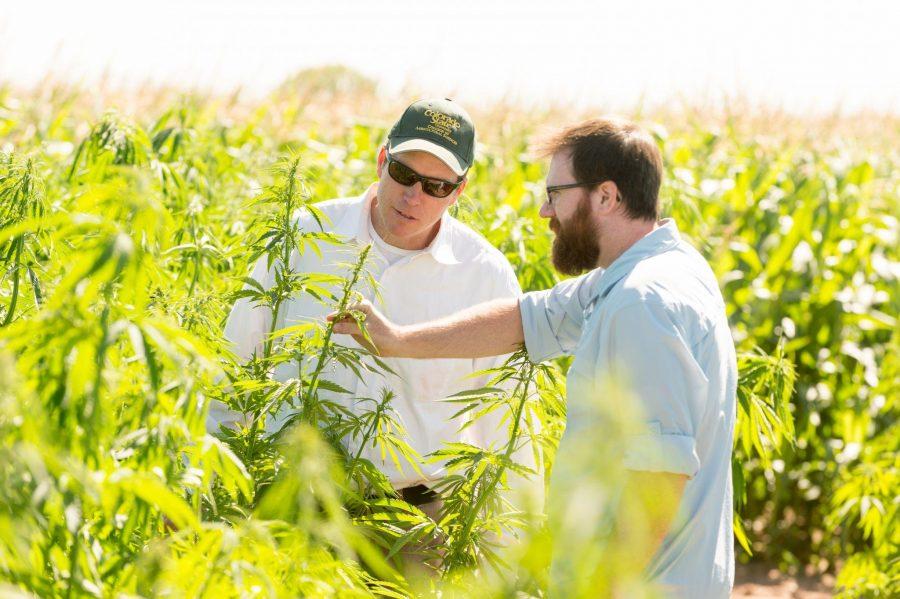 Colorado State University is one of few universities in the country that can legally grow and research hemp.

Researchers at Colorado State University are studying which climates are best for growing hemp in Colorado, and are legitimizing the industry by partnering with the state.

Even though nearly two-thirds of Colorado counties have hemp registrations and are considered legal by the state to grow, it is still federally illegal.

Graduate research assistant Brian Campbell said there are an estimated 2,500 uses for the plant, such as harvesting for cannabidiol (or CBD) for medical purposes, using seeds for food and utilizing stalks for textiles and for industrial uses such as concrete and insulation.

The Industrial Hemp Farming Act of 2015 amended the Controlled Substances Act and separated industrial hemp from the definition of “marijuana.” The act defines industrial hemp as the cannabis sativa L, and it has to have a concentration of THC that is no more than 0.3 percent.

According to the Colorado Department of Agriculture, if it is legal to grow industrial hemp in the Colorado, it is legal to spend federal money to do research — but only if money is redirected from existing funds. This is what CSU is doing.

Most agriculture research is funded by federal grant money such as The National Science Foundation — however, since hemp is federally illegal, the University cannot receive new federal money for research, so funding comes from redirecting existing funds within the department.

The Colorado Agricultural Experiment Station (CAES), which functions under the CSU Department of Agriculture, conducts research on the economics, sustainability and social acceptability that impacts agriculture. CAES will redirect $50,000 of funds previously supporting other programs toward industrial hemp research. The funds will be will primarily support field studies at two locations in Colorado.

CSU is collaborating with the state to ensure farmers will have quality control with hemp seed, because the state department of agriculture has been tasked with developing a seed certification program for hemp.

Some of the research at CSU is looking at what seeds can grow best in Yellow Jacket, Colorado. CSU senior research assistant Abdel Berrrada and associate professor John Mckay planted 12 seeds to see which seeds would do best in the environment.

“We’re just trying to provide research-based information because there’s a lot of information out there, but a lot of it comes from Canada and some other places that may not apply to us,” Berrada said. “Even within Colorado, there are different climatic zones.”

Last year, CSU planted about a half acre of hemp in Fort Collins and another half acre in Yellow Jacket. In 2016, CSU will be expanding the research in Fort Collins and Yellow Jacket, planting around 1-1.5 acres. In addition to the two locations, they will be planting half an acre in four other sites around the state. Currently, they are getting permits to grow hemp in the greenhouse on campus.

The level of THC in hemp changes depending on the climate in which it is grown. The growing regions around Colorado make sure that THC levels do not rise above the legal limit.

“Colorado has so many interesting ‘microenvironments,'” said Tom Holtzer, department head of Bioagricultural Sciences and Pest Management at CSU. “If you try to grow something in far, southeastern Colorado versus the San Luis valley — which is at 7,500 feet — it is a very different environment. We have these research centers across the state that allows us to do locally-tailored research.”

Campbell has recently started analyzing RNA to examine gene expression during different stages of flowering and to look at sex determination. There is not enough data to make any conclusions about the performance, but they will be publishing results after this year’s trials.

Marijuana and hemp come from cannabis. However, industrial hemp has no more than 0.3 percent delta-9 tetrahydrocannabinol (THC). THC is responsible for the psychoactive side effects, or high, of marijuana.

The difference between THC and CBD or Cannabidiol is that someone cannot get high off of CBD. Scientists are interested in CBD for its pharmaceutical uses.

According to the U.S. Drug Enforcement Administration, industrial hemp is the same as marijuana and is classified as a Schedule I narcotic. Schedule I means that it has high potential for abuse and no accepted medical use. It is listed alongside heroin and LSD.

In addition to hemp research, CSU is also involved with research surrounding the effects of marijuana. The director of CSU’s Intergrative Neurophysiology Lab, Horsten Rudroff, is studying patients with Multiple Sclerosis that are using medical marijuana in comparison to those who do not, according to an article in SOURCE. The study uses a scanner to see muscle activity and the nervous system to detect a difference between cannabis users and non-users.

Assistant professor of psychology Lucy Troup has done studies on the effect of cannabis on emotional processes. She used an EEG to measure brain activities of marijuana users. According to the SOURCE article, the marijuana user’s ability to process deeper emotions such as empathy is reduced compared to non-users.

Personnel behind marijuana production compared to hemp is very different, according to Duane Sinning, who is the assistant director of the Hemp Program at the Colorado Department of Agriculture. He said people in the marijuana industry are high risk-takers, while hemp is often grown by traditional farmers.

According to Sinning, the hemp industry has generated $581 million worth of sales in the U.S. from selling to Canada and China.

In 2014, 1,811 acres of land was registered to the Colorado Department of Agriculture for hemp, but only 200 acres were actually harvested. The harvesting rate has increased since then, and registration for last year was a little over 3,800 acres and around 2,000 acres were harvested. Sinning said that these numbers fluctuate frequently.

“These numbers change every day, and the reason they change every day is because a registration is good for 365 days,” Sinning said. “Somebody drops off, somebody new comes in and one that dropped off comes in the next day and re-registers.”

There is a growing interest for the indoor production of hemp due to seasonal limitations. Sinning said farmers can get a head start on the spring season and speed up the plant breeding process. Registered indoor production amounts is 600,080 square feet.

While most hemp was originally produced in Boulder and Larimer counties, production is starting to move into traditional farm areas.

According to the Colorado Department of Agriculture, importing industrial hemp seed across state lines is illegal under the Federal Controlled Substances Act.

Sinning said he does not understand why hemp is federally illegal. He said it makes no sense that a farmer, who could potentially grow a high-quality product, is precluded from the domestic market due to a legal grey area.

“If it’s good or if it’s bad, you can debate. But if it’s used in a store, I do struggle with why an American farmer shouldn’t be able to participate,” Sinning said.

While there is a small amount of funding through the Colorado Agricultural Experiment Station, it is very limited. A number of universities, including CSU, have petitioned the USDA to start funding hemp research, according to Campbell. He said it will be years before federal funding becomes available, if it ever is.

“If industrial hemp research is to continue at CSU, it will be of the utmost importance to work hand in hand with collaborators at other universities and private businesses to advance mutual interests,” Campbell said.