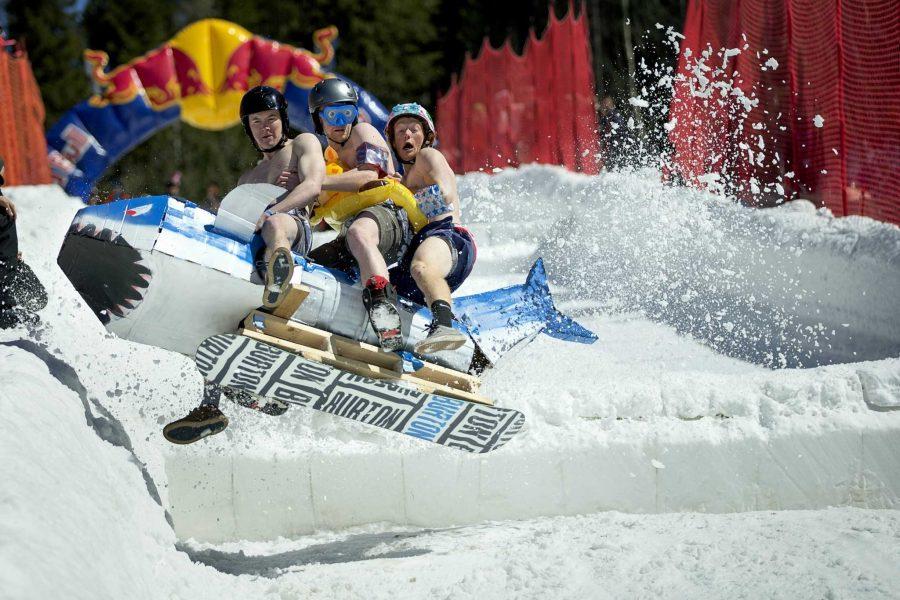 “Schlittentag” is the German word for “sledding day”. However, Red Bull’s definition of “Schlittentag” is: “daredevils willing to propel themselves down a snow-covered hill and over a jump on a sled they built themselves”, which is exactly what 82 participants did at skiing hot-spot Keystone Resort Saturday .

The Schlittentag originates in Germany, but according to Bill Ramsay, the manager of competition services at Keystone, Red Bull has hosted the event in Keystone for the past three seasons. Teams from schools all over Colorado compete in the annual extreme sledding event where the object of the competition is to build an original sled design that is creative and fast – or one that will entertain the crowd with its crash and burn.

“This event is all about building the craziest, most entertaining sled event that we possibly can,” Ramsay said.

“Our team was called the Redneck Yacht Club and we built what somewhat looked like a boat,” said Jack Pendergast, a junior mechanical engineering major at CSU. “It had a little kiddie pool in the back and a very makeshift steering wheel, and I think the greatest part about it was that it was poorly put together but it still made it. We got second place!”

This year is Pendergast’s second time participating in the Red Bull Schlittentag. He said that he and the rest of the team put together the sled in about 5 hours total.

“Last year we kind of made it but we only crashed into the wall so it was kind of boring, so it was great that this run was exciting and the jumps were bigger this year,” Pendergast said. “The whole course was much more massive this year which was awesome so I loved it. I’m definitely going to come back next year because this will be a yearly thing for me for sure.”

“I was on the ‘Schlittentanic’ team, which is the Titanic version of Schlittentag,” Lux said. “I was Rose, of course, and I was here with my lover and girlfriend Jack, and this was the second year I’ve done it and we made it to the bottom both times, but did not make podium both years.”

However despite the loss, Lux said he is still determined and will participate next year for a chance to win the competition.

“I am goal thirsty,” Lux said. “And our sled fell apart completely on the way down and was just destroyed, but we still made it!”

Collegian News Reporter Amanda Thompson can be reached at news@collegian.com or on Twitter @amanduhh3003.