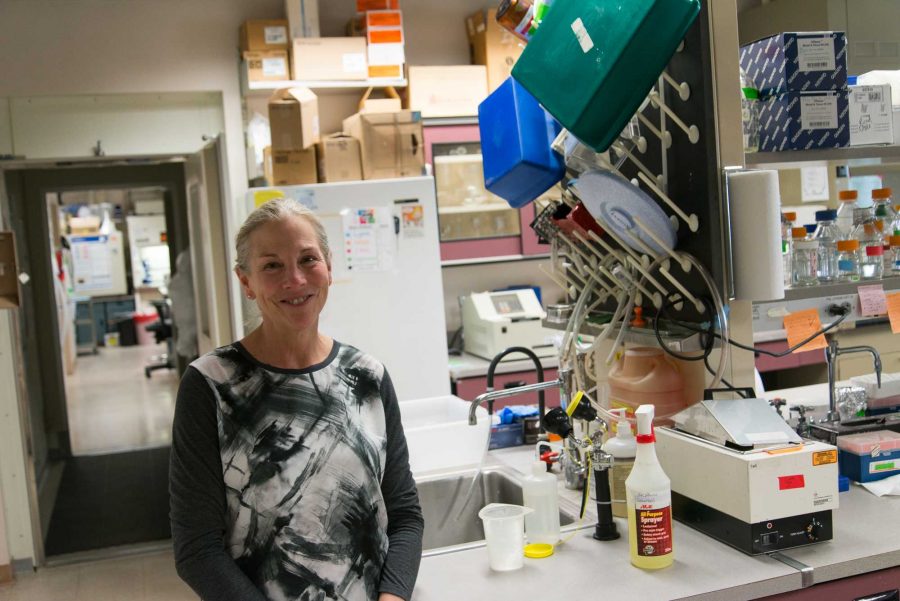 Dr. Susan Bailey's in one of her laboratories. She is working the NASA Twin Study to see how aging changes from long periods in space (Luke Walker/ Collegian)

On Earth, life is protected from harmful radiation that affects our health. For astronauts, radiation is more of a threat.

According to Environmental and Radiological Health Sciences professor Michael Weil, the risk of exposure-induced death (REID) for fatal cancer is 3 percent. If an astronaut flies into space the maximum amount of times, the REID is 3 percent higher.

To understand the effects of extensive space travel further, Weil and fellow Environmental and Radiological Health Sciences professor Dr. Susan Bailey are performing different studies on the effects of radiation on the human body.

Dr. Bailey’s lab is one of 10 participating in the NASA Twin Study, which aims to “provide broader insight into the subtle effects and changes that may occur in spaceflight as compared to Earth by studying two individuals who have the same genetics, but are in different environments for one year,” according to the project website. Identical twins Scott and Mark Kelly were chosen for the project.

However, the study did not start with the twins. The original study actually started with a grant to look at telomeres, located at the end of a chromosome. Telomeres are important because they shorten as people get older, which plays into the theory of aging because they shorten as cells divide. They can also be associated with age-related diseases such as cardiovascular disease. According to Dr. Bailey, the Twin Study is an opportunity to understand the effects of space on these.

“It’s just a remarkable opportunity that now you have two genetically-identical individuals and not only that, they were both similar in their lifestyles because they were both astronauts,” Dr. Bailey said. “Mark Kelly, the ground control in this particular case, had been up in the space shuttle a number of times, so he’s accumulated about 54 days in space. Whereas Scott Kelly, on the other hand, just returned from the one-year mission, has over 500.”

Dr. Bailey is studying the blood samples of Scott and Mark Kelly and other astronauts, including Kjell Lindgren. She will have a total of nine samples from the twins and more from the other astronauts.

“So, the idea is that we’ll watch. We’ll take a number of samples before they go up, and then we take a couple during the flight, and more when they get back up to hopefully nine months when they get back,” Dr. Bailey said. “So we can kind of watch then how telomere length changes with space flight and compare that to ground control’s, whose shouldn’t be changing in the same way, and so that’s how we’ll be making some of our comparisons.”

What Dr. Bailey has found is that telomere length shortens with the exposure of space radiation.

‘We hypothesize that that’s really going to act to accelerate Scott Kelly’s telomere length compared to Mark Kelly’s, who’s living a fairly normal earth life in Tucson, Arizona,” Bailey said. “In fact, if space flight is doing that, accelerating telomere loss, then he’d be at an increased risk of the age-related diseases like cardiovascular disease … and maybe even increased risk of cancer showing up.”

Any changes found in the study can be attributed space flight. This not only leaves implications about space flight but what they know about aging and cancer.

Weil is studying radiation on mice to further understand the effects on humans. Part of his study looks at how space radiation is different from terrestrial radiation and dose rates.

“So we can predict the kind of tumors we get from radiation and exposures, and we can actually compare at the molecular and cytogenetic levels, the tumors from mice to those in humans,” Weil said.

Space radiation is 50 times more effective than terrestrial radiation from causing tumors, according to Weil. During his study, there were a dozen different types of cancers caused by radiating the mice. The most notable tumors caused by space radiation is liver tumors. What was unexpected was that the liver tumors occasionally metastasize to the lungs, making it deadly.

“My guess is that the general cancer research community is going to reduce the risk simply by reducing the risk of dying of cancer,” Weil said.