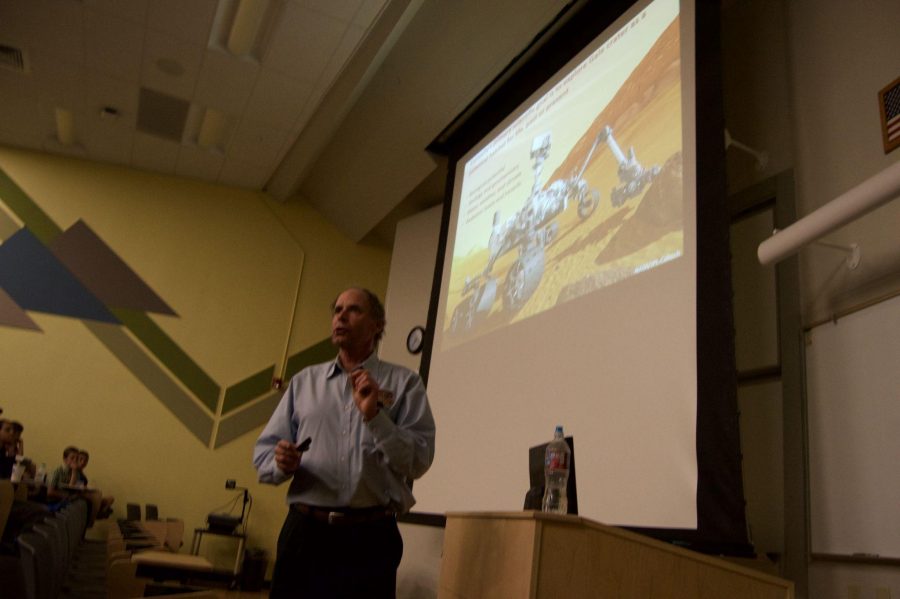 Doug Ming is a graduate of from the soil and crop sciences program at Colorado State University. Today, he is the chief scientist for the Astromaterials Research and Exploration Science Division at NASA’s Johnson Space Center in Houston, Texas. Ming spoke to an auditorium full of students, educators and even a few children about NASA’s Curiosity Rover, which is currently exploring the geology of Mars.

The rover is equipped with numerous gadgets that are helping scientists determine the geological properties of Mars, where scientists hope to send the first human by 2035.

However, prior to sending humans to Mars, scientists will need to solve the problem of solar radiation, which, on Earth, is reduced by the magnetic field — something the red planet lacks.

“If you were going to go on a 500-day trip to Mars … you would be exposed to almost 500 times more radiation than if you sat right here in this room,” Ming told the audience.

The rover has been able to analyze the chemistry, mineralogy and microscopic properties of rocks on Mars, Ming said.

Among other things, the Curiosity Rover was able to detect a variety of water conditions that once existed on Mars.

The rover was also able to detect perchlorate in the soil.

“Perchlorate is one of the … nastiest potential threats to humans because if you get sustained levels of perchlorate, it can be deadly,” Ming said.

NASA states that solar bodies must be protected from contamination for a number of reasons, including “to preserve our ability to study other worlds as they exist in their natural states, to avoid contamination that would obscure our ability to find life elsewhere — if it exists — and to ensure that we take prudent precautions to protect Earth’s biosphere in case it does.”

One of the ways to make sure that the planet remains sterile will be to avoid bringing humans to areas where water levels are high enough for microbes to survive.

“You get a microbe in the water, microbes like to move around,” Ming said. “It gets subsurface, the next thing it’s in the aquifer, it goes on down and it proliferates near some energy source and you’ve got an issue.”

Ming spent over 45 minutes speaking to students and answering questions after the presentation.

“I thought he was an excellent speaker and really catered to all audiences,” said Annalise Maughan, a graduate student who hopes to work in materials development.

Some left the talk hopeful.

“It was really cool to see previous graduates of CSU, the science program at CSU, do some amazing things — gives me hope as a graduate student going from here,” said Paul Todd, a first-year graduate chemistry student who is working on energy storage.