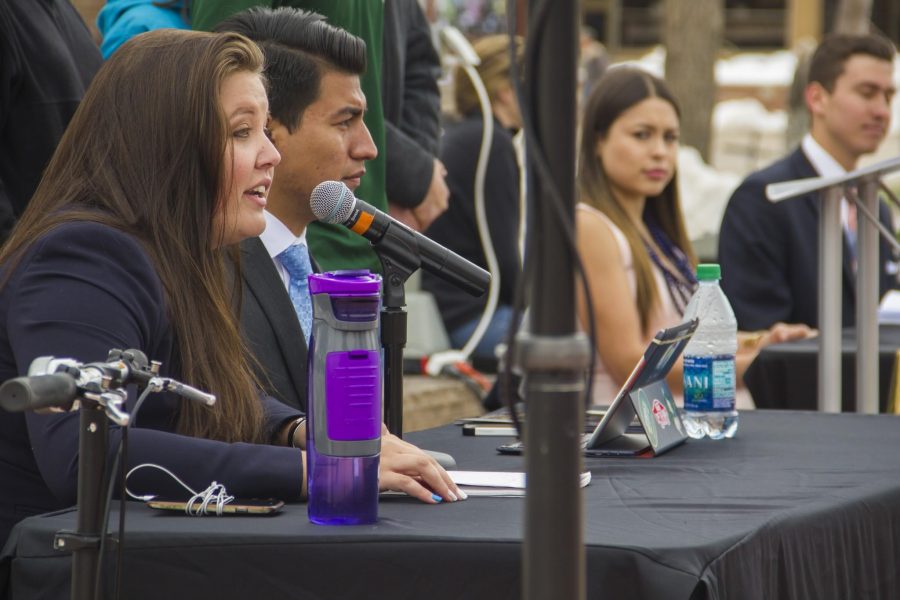 Both parties running for ASCSU president are focused on improving CSU's sustainability. Ashley Higgins and her running mate Steven Losolla (left) would like to see that the school implement a composting program, and Daniela Pinedá Soraca with her running mate Mike Lensky (right) are focusing on more readily available alternative public transportation. (Photo credit: Cam Bumsted.)

The cap on the ASCSU presidential campaigns for this year was set at $1,250. Exceeding this number could lead to automatic withdrawal from the election. In order to track the amount spent for each of the campaigns, each candidate group must submit itemized reports every Monday and Friday of each week.

According to the reports submitted by the candidates on Monday, April 4, 2016, the Ashley Higgins and Steven Losolla campaign has spent $938.40 and and the Daniela Pineda Soracá and Mike Lensky campaign has spent $604.43 on their campaigns, with voting set to end Wednesday April 6, 2016.

“If they spend a cent over that cap, they can automatically be disqualified,” said Edward Kendall, ASCSU director of community affairs.

The presidential candidates fund their own campaigns and are not allowed to exceed the gap to lessen economic barriers on the campaigns and allow more people accessibility into Student Government, according to Kendall.

“Some people would spend a lot of money and basically it became a contest of if you could spend the most money, obviously you’re going to win against the person that has $100,” Kendall said.

Collegian Reporter Megan Fischer can be reached at news@collegian.com or via Twitter @MegFischer04