Around 80 finalists honored for research and creativity at CURC awards 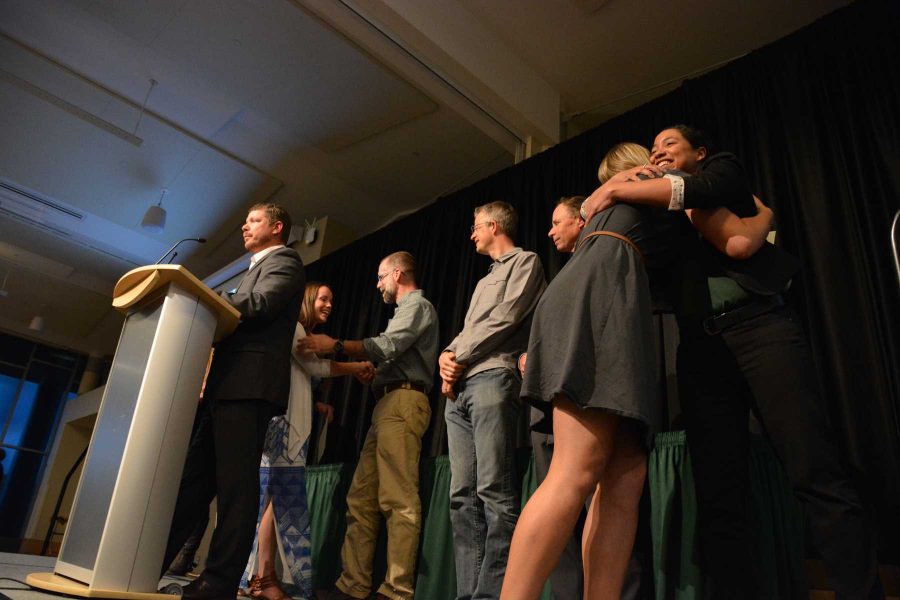 Director for Office for Undergraduate Research and Artistry, Mark Brown, announces the winners of the 2016 CURC awards research poster recipiants as they are congratulated for their research. (Photo by Megan Fischer)

Around 80 finalists were honored Monday night at the Celebrate Undergraduate Research and Creativity awards ceremony, a showcase which aims to highlight students’ research and creative works at the undergraduate level. There were six categories that students could submit to for the 2016 awards. The categories included research posters, service learning, oral presentations, writing, art and documentary film. The showcase is open to all students to participate in.

“It’s a good way for students to showcase the work they’ve done through the year,” said Mary Swanson, associate director for the Office for Undergraduate Research and Artistry at Colorado State University.

The Office for Undergraduate Research and Artistry gave out 11 final awards, and the graduate counterpart awarded two. The submissions include work from students in all eight colleges on campus, according to Swanson. The 2016 event was sponsored by the Office of the Vice President for Research.

“I think what’s really great about the event, is it’s an opportunity for students from all eight colleges to get together and to learn about the work that’s taking place in other colleges,” Swanson said.

“It means a lot to be able to be recognized for all the work I’ve done over the past four years,” Collings said.

Senior social work major Kelly Connor was awarded for her research and work in service learning with her project entitled, “We all need to pee: gender inclusive restrooms at CSU.” Connor was also recognized by the graduate school for her project and research.

“For me, as a social work major, it’s really cool to apply the methods we’ve learned in class, and turning that into tangible research on our campus,” Connor said.

The main purpose of the event is to encourage students to present the value of what they are doing, according to Mark Brown, Director for the Office for Undergraduate Research and Artistry.

“All of this work represents experiential learning,” Brown said.

The CURC showcase had over 600 participants for the 2016 year and has been taking place on campus for just over 20 years, according to Brown.

“This is the next generation of scholars, researchers and artists,” Brown said. “We need to highlight this work so it can continue.”