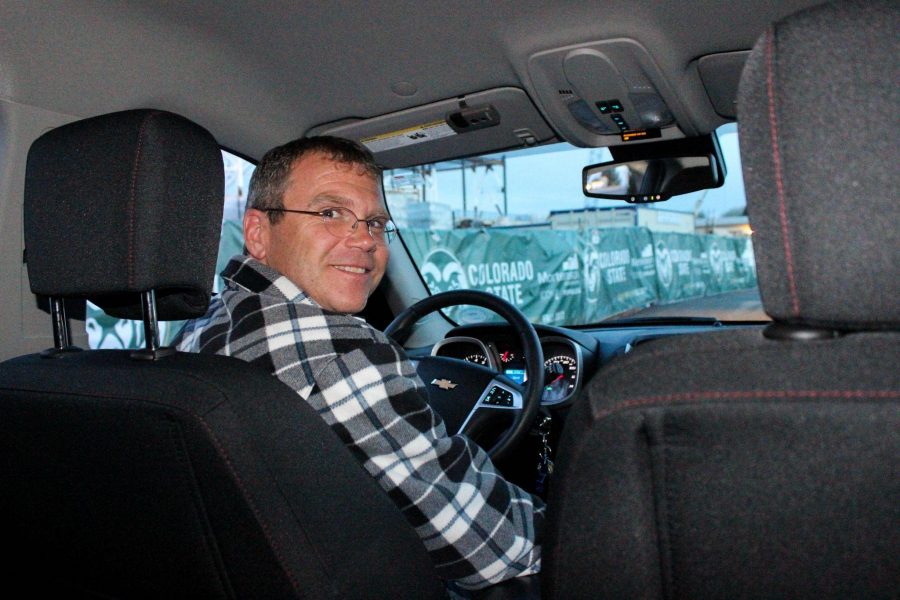 With each car that passes, your anticipation grows. A car brakes for the stoplight ahead and you’ve already put on your coat by the time you realize it’s zoomed away as the light clicked green. Finally, a silver car has pulled up outside the house. “Are you my Uber?” you think to yourself, trying to remember what a Ford Fusion looks like. Mercifully, the driver has called to notify you of their location on the street. It was the other silver car one street down. Of course.

Not every interaction is like this, but it’s certainly the new stereotype. Uber has only been serving Fort Collins since fall 2014, considerably after its debut in New York March 2009.

Uber has filled a niche in the community when it comes to convenient transportation. The company capitalizes on precisely what makes young people young – a desire to get places fast with no fuss.

“I like how fast and easy it is, I’m usually using it on the weekend with my friends,” hospitality management freshman Bobbie Nathan said. “It comes in handy for freshmen who don’t have cars.”

The Uber app has found a large market among students long disillusioned with RamRide, a CSU-provided and free resource. RamRide often has a long response time upwards of one hour due to large demand and limited resources.

“I would definitely pay an Uber over using RamRide because they’re faster, like within five or ten minutes,” economics sophomore Allie Cederberg said. “They’ll even take you through McDonald’s.”

Drivers often leave with a good attitude and prepared for the evening. Many drivers will keep extra bottles of water and boxes of tissues should passengers need them.

“I drive to earn a little cash in my spare time and for the flexibility,” driver Anthony Todd said. “You get to meet all sorts of interesting people.”

However, not all students on campus are utilizing Uber’s services in this wake.

“I barely know what it is. I don’t have a smart phone, so that makes it super inconvenient,” international studies junior Matt Dutro said. “If I needed to get somewhere and wasn’t driving I would probably just use RamRide.”

For those who do have the technology, the process of requesting a driver is fairly simple. One simply sets their pickup location through Uber’s mobile app and are immediately provided with their driver’s name, car model, and estimated time of arrival.

Riders are offered a number of choices when it comes to vehicle: uberX, uberXL, UberBlack, or an SUV. Confused about these options? The first distinction relates to size: uberX and UberBlack can both seat 4 passengers, while uberXL and SUV both seat 6 passengers. The second differentiation regards luxury: UberBlack and SUV denote a luxury vehicle in black. UberBlack drivers have commercial licenses, insurance, and stricter background checks. Uber also restricts the amount of Black drivers to keep demand and prices high.

The ride itself is paid for through the app once users connect their credit card.

“I like that I don’t have to carry cash or worry about leaving my credit card behind. I get the receipt emailed to me, too,” Cederberg said.

While price does vary by location, a standard ride consists of base fair, approximately 13 cents per minute, and $1 per mile. There is a minimum fare requirement, often $5. During times of heavy demand, particularly holidays or during popular local events, the rate enters what is called “surge pricing.”

In these moments, a multiplier is applied to regular fare. The multiplier is calculated using the company’s complex algorithm and has no cap. Instances have been noted where the multiplier reached up to 9.9 percent. While the app requires a rider consent to the increased rate prior to requesting the ride, there have been exorbitant rides that customers have claimed they did not realize would reach unacceptable totals, in one man’s case over $1000.

Another popular feature is the option for riders who also have the app to split the fare. This makes it easier for people to share an Uber without worrying about who will call, and subsequently pay for, the ride.

The company’s paper and plastic free fiscal plan has gotten them into trouble, however. Most notable was a public outcry in October 2015 when drivers’ information including social security and license numbers was leaked.

One other concern voiced among skeptics of the app is the security of individuals getting into the car.

“It’s always kind of scary getting into the car with some random driver, especially with the Uber horror stories you hear,” Nathan said.

Uber aims to maximize safety of individuals. Drivers undergo a pre-screening process that includes a driver and criminal history check. While drivers and riders can contact each other to work out pick-up details, numbers are anonymized to prevent future contact. The route driven is also mapped via GPS in Uber’s records and displayed on the customer’s screen during the ride.

The company also puts forth a Code of Conduct for employees, emphasizing non-discrimination and compliance with all laws, among other things.

Most drivers have no problem complying with the rules set forth. They report working as drivers to provide supplemental income and improve their work-life balance, among other reasons.

Todd expresses one frustration of the job, however. “[I don’t like] not knowing where the person I’m picking up is going. I could get someone who is going all the way to the airport when I thought I might have been able to pick my son up from school in an hour,” Todd said.

A recent movement has produced Chariot for Women, a similar ride-on-demand service with catch – it’s solely for women. Designed to allow women and children to feel safer and more comfortable accepting rides from strangers, all drivers will be female and undergo more extensive background checks than those at Uber.

Chariot for Women was slated to begin serving Boston on April 19, but has decided to postpone its launch to expand the services to a number of other cities.

Despite some individuals’ poor experiences and the following media frenzy following each incident, many Uber users remain loyal.

“All the drivers I’ve had have been so nice and accommodating, willing to make multiple stops to drop people off, and the app is really efficient,” Cederberg said. “The service is just really awesome with Uber.”