Students protest failure of Diversity Bill outside of ASCSU office 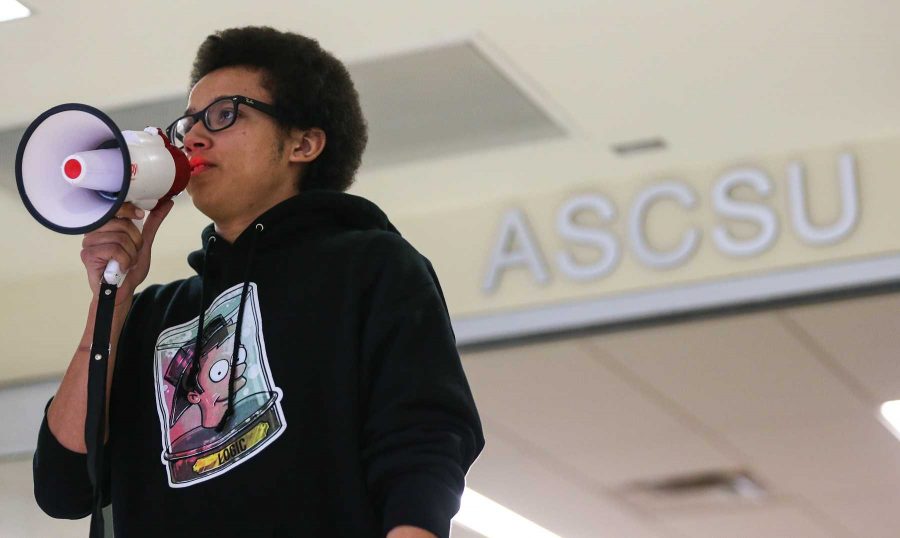 In response to the Diversity Bill failing to pass March 2, around 50 students, representatives of Student Diversity Programs and Services offices and members of ASCSU gathered to protest and discuss future initiatives.

The Diversity Bill would have created nine senate seats and nine associate senate seats for representatives of SDPS offices. It also would have created a senator seat and associate senator seat for the Office of International Programs. Additionally, it would have allowed any student organization that represented an identity historically underrepresented to ask senate for a two-thirds majority vote to create a seat for that organization.

While the Diversity Bill, officially known as Bill #4514, received a strong majority “yes” vote two weeks ago, at the final vote last Wednesday, 10 senators voted “no.” By a vote of 17-10-0, the bill did not receive the two consecutive two-thirds vote from senate required to alter the ASCSU constitution.

“We are here to gather and show (that we need representation),” said Kwon Atlas, author of the bill and leader of the protest. “One vote would have made the difference, and we would have been getting senators in this body and changing the culture.”

Protestors have started a petition to put Bill #4514 on the ASCSU election ballot for students to vote on this spring. The petition would need about 3,100 signatures, because the ASCSU constitution requires 10 percent of the student body for a petition to be valid, according to Speaker Pro Tempore PJ Seel. The petition had 300 to 400 signatures at the time of the protest.

Senators that voted “no” said that a new bill regarding diversity in the ASCSU senate will be introduced in the future, but it is not ready to be presented to senate this week, Senator Josh Williams said.

“I think what’s most important is that we support diversity, so much so that we want more groups to be involved,” wrote Lawrence Horowitz, a senator who voted no for the Diversity Bill, in an email to the Collegian. “We don’t think this bill does enough. We want more and that’s what we are fighting for.”

According to various senators that voted “no,” the legislation being drafted will introduce a “House of Representatives” for diversity.

“The Diversity Bill excludes various cultures that wish to be heard,” Natalie Dicharry wrote in an email to the Collegian. “The new legislation proposed involves introducing a House of Representatives that will represent various organizations on campus including Hallel, BAACC, the Afghan Student Association, and many more.”

At the protest, some students expressed dissatisfaction with this legislation that has not yet been released, because they said it would create a “separate but equal” body within ASCSU senate.

“How do you expect us to come together and be equal if you keep separating us and pushing us into corners?” said one freshman protestor present Monday.

Atlas also expressed this view and said that the new legislation would only create another body that is not diverse or representative of marginalized identities.

Atlas said in an interview with the Collegian that the new legislation is vague and not endorsed or vetted by cultural center directors and is a “drastic step backwards.”

In anticipation of the protest, ASCSU President Jason Sydoriak, who helped to author the Diversity Bill, sent an internal email to ASCSU the morning of March 2.

“One of the most important democratic processes is the right to assemble,” Sydoriak wrote. “I am inspired by the many students who want to engage themselves with their student union in order to make the voices of other students louder. Please organize and assemble peacefully; because any other way plants the seeds for unnecessary resentment and retaliation that will only make future conversations difficult.”

Collegian ASCSU Beat Reporter Erin Douglas can be reached at news@collegian.com or via Twitter @erinmdouglas23.