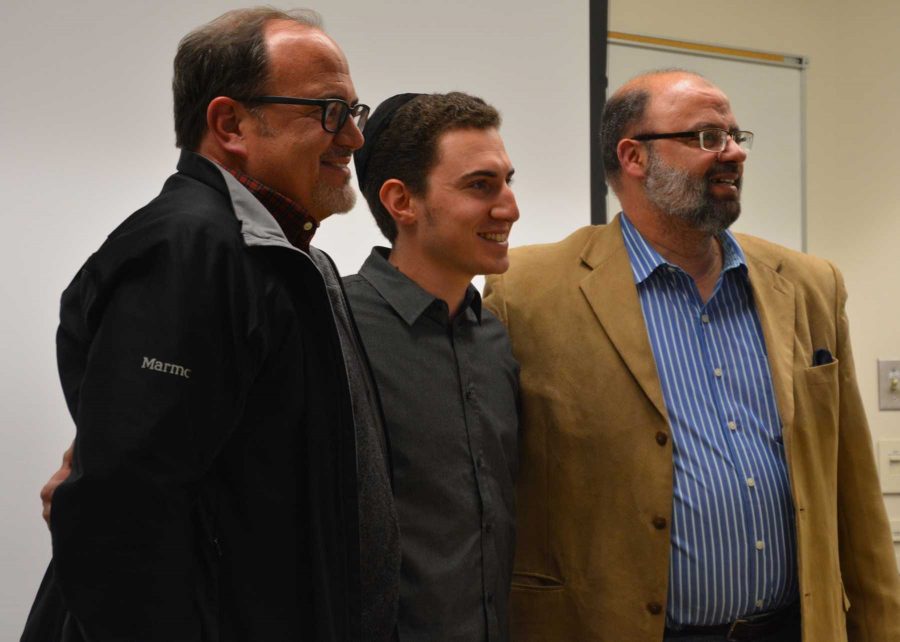 Rev. Hal Chorpenning (left), Alex Amchislavshiy (center), and Tawfik Aboellail (right) all took part in "Dialogues around Differences," a monthly panel directed by the department of social work. The topic for this month was interfaith dialogue between Christianity, Judaism and Islam. (Photo by: Megan Fischer)

In the world today, people collide and oftentimes use religion as a reason for their disagreements. Yet, experts say religions, however diverse, can combine to incorporate the many people within this world.

A group of about 50 students, staff and faculty gathered in a room in the Education Building on Colorado State University’s campus for “Dialogues around Differences,” a panel put on the first Monday of every month by the Department of Social Work.

The March talk was centered around three religions, Judaism, Islam and Christianity, and how interfaith between the religions can open up dialogue and create unity between each.

Alex Amchislavskiy, who was born in the Soviet Union and later moved to Chicago, talked about Judaism. He works for Hillel on campus.

“The Soviet Union was not a good place to live as a Jew,” Amchislavskiy said.

Amchislavskiy spoke on Jewish identity and its complexities as it relates to other religions, specifically Christianity.

“It’s this venn diagram, if you will, of religion, culture and ethnicity,” Amchislavskiy said. “It’s a different idea of identity.”

He gave a synopsis of Judaism and connected it with the other two religions chronologically.

Chorpenning explained his view on LGBT rights, which does not seem to fit with the way Christianity has often been interpreted.

“One of the things that I get calls about really frequently from therapists here in town, is when one of their clients is trying to make their sexual orientation and their faith tradition jive, and a lot us may have grown up with a faith traditions that said homosexuality is a sin,” Chorpenning said. “Today, our congregation is open and affirming of LGBT folks.”

Representing Islam at the discussion was Tawfik Aboellail, the Egypt-born president of the Islamic Center of Fort Collins. He also serves as an associate professor in the Department of Microbiology, Immunology and Pathology at CSU.

“The fore-coming of Muhammad was foretold in all religions, including the Torah and gospel,” Aboellail said.

Aboellail explained the traditions and rituals of Islam, including the Ramadan fasting, the trip to Mecca once in one’s lifetime and the daily prayers.

“We pray in a way that is very strange to a lot of people,” he said. “They say how can you put your forehead on the ground.”

All three religions are linked in some way, and for Islam, the monotheistic deities of the other two remain prophets within the Islamic scripture.

“Not a single Muslim is a Muslim until we believe the scripture,” Aboellail said. “We believe in all the prophets, but we believe that there are some changes that have been introduced, and that is the only difference.”

Amchislavskiy emphasized the importance of having other religions in the world and being unified with other people of diverse religions.

“It’s very important to Judaism that there are other monotheistic religions around,” Amchislavskiy said. “For Judaism, it is very important that the message of unity is getting out there, and I think the emphasis is really on the idea of free will, that all humans have free will and that the potential and what you have to do with it to affect good in the world. That’s something everyone can do, whether you are Jewish or not.”

Likewise, Chorpenning emphasized that in Christianity, living in the way of Jesus is to live a life of love for everyone.

Chorpenning also recalled a time when Plymouth Congregational Church UCC connected with the Islamic Center to show their support for the Islamic community at a time when there was anti-Muslim dialogue.

“Standing in interfaith solidarity is very important to us,” Chorpenning said.