In its 4th year, Enslaved focuses on human trafficking in Colorado 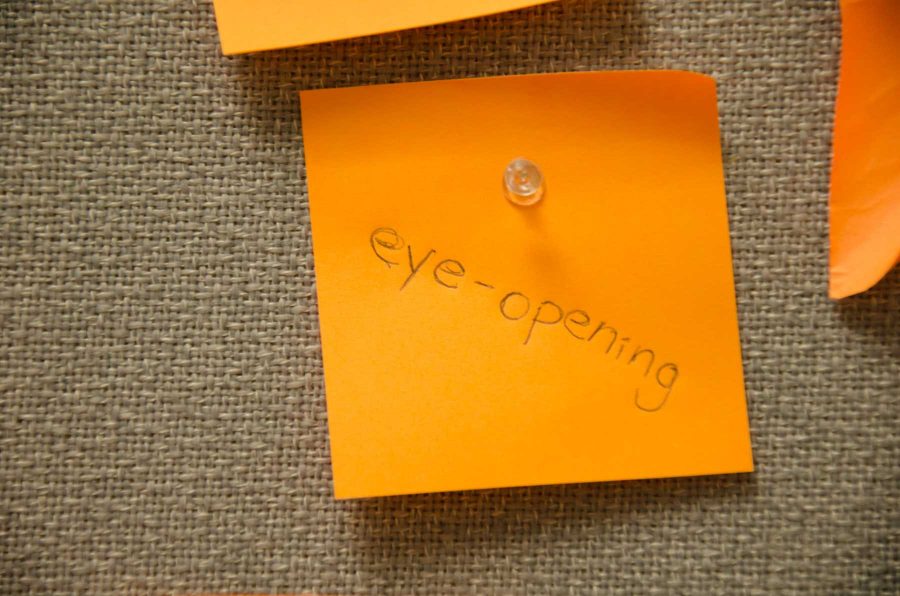 A wall of sticky notes covered Enslaved‘s discussion room. Filled with people’s reactions to the human trafficking stimulations they had witnessed, the one-to-two-word comments ranged from “scared” to “eye-opening” to “anger” to “disheartening.”

This year, Enslaved responded to positive feedback from community organizations and focused their event on issues close to home: human trafficking in Colorado.

The event was put together for the fourth year by student organization No More Injustice, which looks to spread awareness for human rights and trafficking. Its president, Madison Nason, said they choose simulations depicting events taking place in Colorado because “people already have an idea about international human trafficking, but we wanted to teach people about things they had no idea about.”

Enslaved used the Grand Ballroom in the Lory Student Center, where volunteers guided groups through the three stimulation rooms.

The first room depicted labor trafficking in the sheep farming industry, an area in human trafficking ranked as the second most common in Colorado. This room seemed to shock students the most, as many did not know these heinous acts were taking place so close to home.

In the second room, the Denver Broncos’ Super Bowl victory was being celebrated. The simulation consisted of male actors reading profiles of trafficked women off the website Backpage — trying to decide who would accompany them for the night — while student volunteers were asked to read the women’s stories.

The women’s stories ranged from having nowhere else to go, making money for a pimp and pressure from one’s mother. Both the postings on Backpage and the profiles about the women were true.

The final room showed a scene of both sex trafficking and interpersonal violence in a relationship. It was inspired by the story of a women from Greeley, who was present at the trade fair.

No More Injustice Co-President Samantha Aschwanden said the organization wants more people to be aware of the proximity of human trafficking.

“We wanted people to feel uncomfortable … this could be happening in the next town or even the house next door to us,” Aschwanden said.

No More Injustice set up a reflection room as a safe place for attendees to discuss the scenes they had seen. Volunteers from the Center for Public Deliberation, an organization and CSU class, led groups in processing the graphic scenes. This looked different in each group: Some were very quiet, others asked a plethora of questions and all around, there was interesting and engaging conversation.

Attendee and junior mechanical engineering student Lauren Pott was glad for the chance to discuss and process in a safe place.

“I’m glad they are doing this for the sake of awareness,” Pott said.

Student volunteers acted in the scenes, and returning volunteer Willy Salinas said “it is important to get the message across and that this is intense but real, and that fear is real for the people in this world.”

Enslaved will continue Friday from 10 a.m. to 4 p.m. in the LSC Grand Ballroom.