Humans of CSU: The life of an ROTC cadet 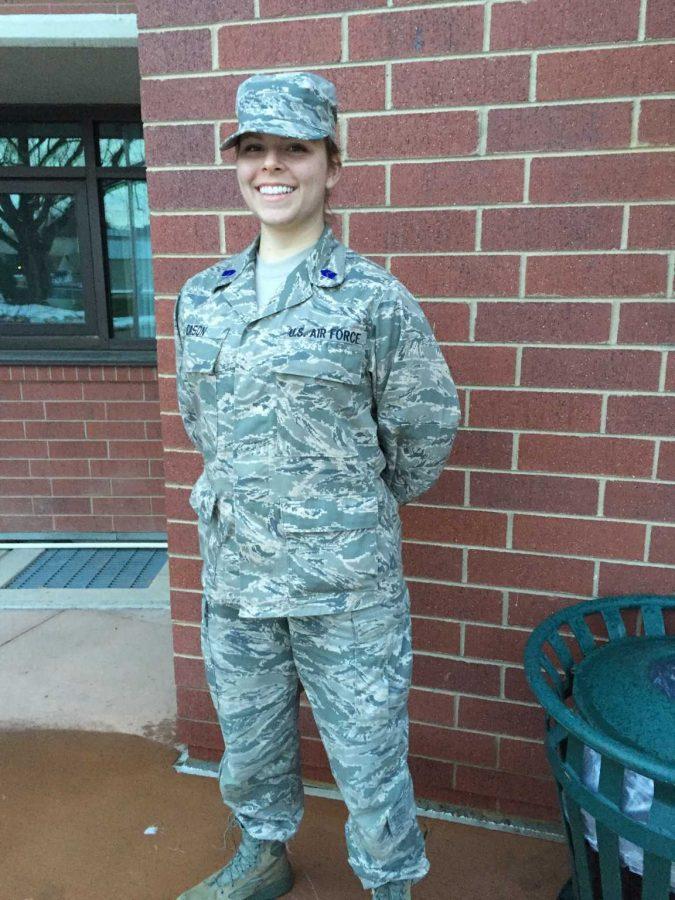 I have a lot of military members in my family — Army and Air Force. The deciding factor that I join the Air Force ROTC was because of my dad.

It’s been the best decision I’ve made because I don’t think I would be in college still without it. It’s made me a stronger person mentally and physically and I’ve done some things I would not have expected I’d be able to do. I never thought I’d be able to do a bear crawl and now I’m doing them across a football field. I never thought I could run a mile and then I did a 5K — you know? Just things like that — things that you don’t think you can do but for having the support system that ROTC offers: camaraderie, friendships — everything. Having other people (who) push you, (who) know you can do it when you don’t, helps.

I’ve never been able to look into a room and see every single person and respect them all. And that’s one of the things I learned day one — that I could respect every single person in this room. Whether they’re going to stay in ROTC, whether they’re going to commission, the fact that they’re here means more to me than the fact that some other college students are just here.

A lot of the cadets (who) I’ve met are amazing people doing amazing things. Some of the people that I’ve met are people (who) I never thought I’d meet in real life. Like, I never thought I’d meet some of the kindest people that put everyone else before them. I thought it was a dead generation. The best part is meeting all these people who are outstanding people, outstanding citizens with great character and a very different variety of people.

There’s not really a hardest point because as soon as you have one, you push past it and find another one — something you can’t do and you do it. You’re like, “Good, what’s the next thing?” It’s made me into a different person. I never challenged myself mentally or physically because I was too afraid to. I didn’t know what would happen. I had a fear if I started talking about my family or about my dad, I would just break. And some of the mental obstacles I’ve faced from being in training and being in ROTC helped me become a stronger person without even having to think about it. I’m stronger mentally and physically. I’ve become more of a leader. I’ve been thrown into situations where I’m like, “I don’t know if I can do this,” and then they gave me the skills to figure it out, learn from my mistakes and others’ mistakes and do better. Take responsibility. That’s one of the biggest things I’ve learned.

My family — my dad, my mom, my brother — a lot of the times in high school, they were absent, so I always thought it was myself motivating myself. It was a “me, me, me” kind of show, and then my mom got cancer the second time, my dad got ran over. Just the thought of losing some of the people who are most important to me, people picking on my brother for being autistic — I realized I don’t want to lose the people I love in any way because I’m so caught up in my own world. The world doesn’t revolve around me. I’ve used the lessons that I’ve learned from their love to motivate me, to not let them down and make me a better person.