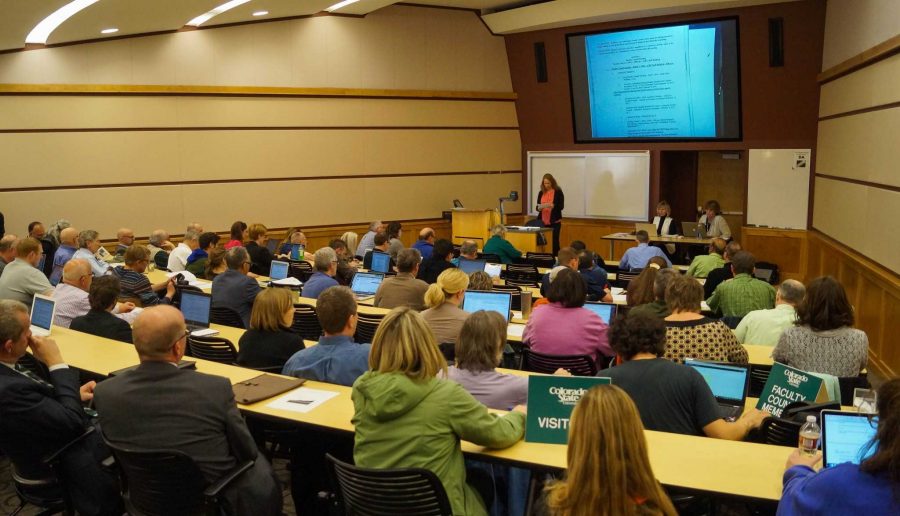 Legislation in general counsel may have a large affect on CSU’s upcoming budget. The hospital provider fee program is expected to push the state over TABOR limits, which would force the state to issue taxpayer refunds and reduce spending in discretionary areas, including $20 million from higher education.

Legislation currently in general counsel proposes to avoid this by converting the hospital provider fee to an enterprise fund, which would not count towards the TABOR limit. If the legislation fails, $4 million will be cut from state funding to CSU. The current CSU budget proposal takes the $4 million cut into account, so if the legislation passes, the University will have more funds to allocate than expected.

“The budget is still in a lot of flux,” Miranda said to the Faculty Council. “We don’t know if (the state legislature) are going to cut us $4 million or not. $4 million is a lot of money. We might not know an enormous amount until quite late in the game.”

“What we have argued is that in ticked venues where we have security, we’re providing security and concealed carry is not permitted,” he said to Faculty Council. “We have also argued that in places where we’re in a contractual agreement with students, like dorms, student must live by our rules.”

The University of Oregon requires students to sign a contractual agreement to not carry a gun on campus before enrolling, but there is doubt about whether or not this contract would hold up in court, Frank said.

“Our general council feels confident that the institution has broken no laws,” Frank said to Faculty Council. “We stand by the academic freedom of our faculty members. In the end, our position — our position is clear as a research institution.”

Frank said that the University has asked the faculty member performing the research to acquire fetal tissue from a different source while the Planned Parenthood congressional inquiry continues.

The University Curriculum Committee is considering recommendations from student groups to add one or two required courses to the AUCC concerning diversity. If UCC makes any change to the core curriculum, then the decision will ultimately be up to Faculty Council as a vote, said Mary Stromberger, chair of Faculty Council.