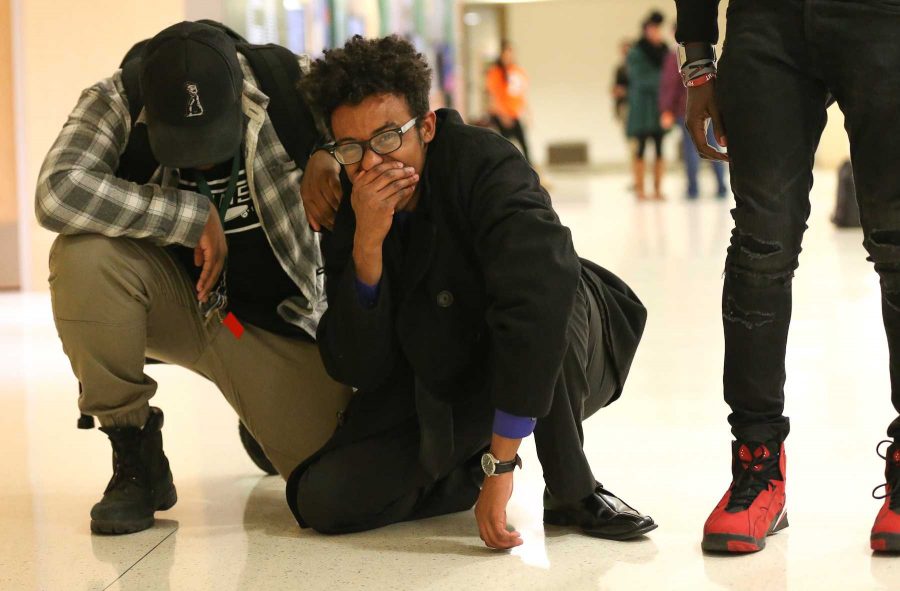 After failing last week, the Associated Students of Colorado State University’s Diversity Bill passed by one vote at 9:45 p.m. Wednesday. Senate gathered in a Lory Student Center Ballroom after the 100-person gallery created a fire hazard in the the senate chambers.

Any bill that alters the ASCSU constitution requires two consecutive two-thirds majority votes from senate to be enacted. At the first vote on Feb. 25, the legislation passed 28-1-1. At the second vote on March 2, 10 senators voted “no,” missing a two-thirds majority by one vote at 17-10-0.

Two and a half hours of gallery input included reactions to and reasons why the Diversity Bill was previously voted down.

“Accept people for who they are,” Martinez said. “When I keep that in mind, it’s easy to make decisions. We don’t want to separate people. We want to bring people together. When I watched the demonstration on Monday … I’m not sure that (demonstration) brings peace.”

Martinez said he would not take a position on the legislation but encouraged students to keep an open dialogue and work together towards a common goal.

The Diversity Bill will allocate nine senator seats and nine associate senator seats to representatives for SDPS offices, International Programs and Services and the Adult Learner and Veterans Services Office. Any student organization that represents a historically underrepresented population not currently represented in the body may also petition the director of diversity and receive a seat after a two-thirds majority senate vote, according to the wording of the bill. Prior to the Diversity Bill, ASCSU senate seats represented each academic college and the graduate school.

Organizations that will be allowed one senate seat and one associate senator seat:

Many students from religious organizations expressed concern that the Diversity Bill identifies nine organizations that will obtain seats by the legislation’s passage but does not include any religious groups.

“If you honestly believe the Jewish community doesn’t deserve a seat, then the bill is biased,” said Rachel Rheingold, a freshman hospitality management student. “I stand for the 10 senators that voted ‘no’ (last week) because they want to create a better solution than this bill offers.”

Senators that voted no last week drafted new legislation to create a house of representatives for diverisity. The alternative legislation has not been released, but several members of SDPS offices opposed it on the grounds that it created a “separate but equal” legislative body, and that it did not accurately address student concerns.

“I am disappointed in the fact that we are in this 21st century and we still think that separate but equal is the way to go,” said Shayla Monteiro, a senior social work student. “(I am disappointed) that it is okay to think of ourselves as separate from each other, that we don’t see that everybody in this room is interconnected. We still think that it is okay to speak for … other marginalized identities instead of speaking with each other. … We’re too busy coming up with counter arguments. How many of us are being self-critical of how we are perpetuating systems (of injustice) in our every day lives? We can’t even check ourselves.”

The bill has been proposed at every senate session since the fall of 2013. At the first introduction, it was postponed indefinitely. At the second, it was passed without allowing SDPS offices the ability to vote. This eventually resulted in the positions being dissolved, and the bill transformed into the Inclusive Excellence Committee, which according to several sources failed. Many proponents of the bill said that the failure of the Inclusive Excellence Committee was a key reason why diversity representatives needed the ability to vote in senate.

Members of Greek life attended to support a speech by Juan Caro, the senate recruitment officer, in which he addressed an alleged impeachment against him and reactions to the bill being voted down last week. No impeachment bill was presented at senate.

“We have the right to vote, at least we thought we did,” Caro said. “Now, I see that our right to vote has been threatened … by threats, demonstrations, insults and judicial reviews with unsustained evidence. I cannot be legally removed from this body because of how I voted. But coincidentally, a week after I voted “no” on the diversity bill, I have an impeachment bill with my name on it.”

Members of the SDPS offices that spoke during gallery input said that while the Diversity Bill may still be flawed, it is a first step.

“Some people are saying this doesn’t go far enough,” said Vance Payne, a freshman engineering student, during gallery input. “I would argue that I agree. But you have to start somewhere. If the history of this world has taught me anything, it is that people will always find somebody else to exclude. That fight will never end. If we’re waiting for the touchdown on the first play and we haven’t even made a first down, we’re never going to make that progress.”

After the final vote, members of diversity offices celebrated in the hallway of the Lory Student Center, and the author, Kwon Atlas, spoke to senate about future plans to include other identities.

“Just sitting outside talking to the Catholic community, (I realize) there’s still a lot of work to be done,” Atlas said. “Whether you voted on one side or the other, we did something important tonight.”

Collegian ASCSU Reporter Erin Douglas can be reached at news@collegian.com or on twitter @erinmdouglas23.