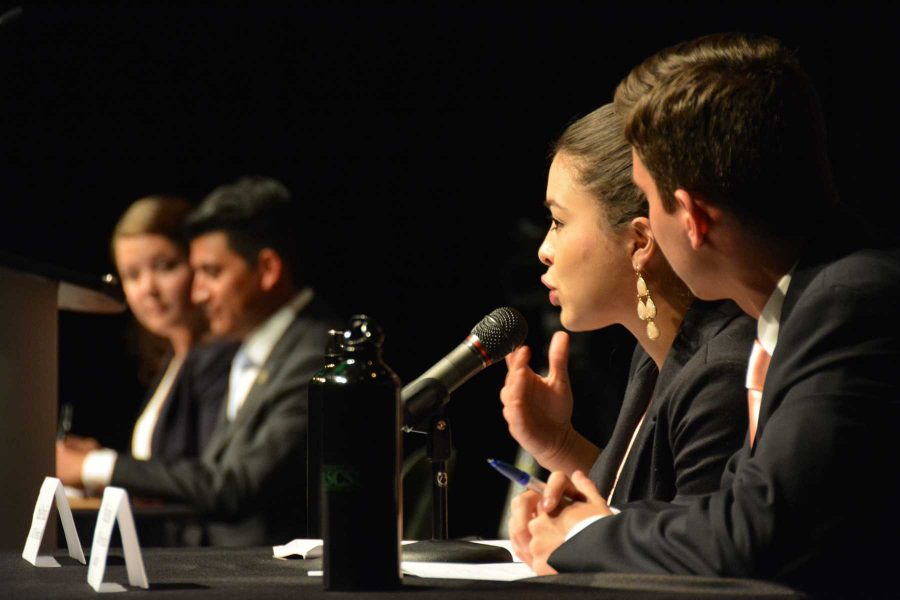 The Associated Students of Colorado State University presidential debate in the Lory Student Center Theater Wednesday at 7 p.m. a week before elections take place. The debate lasted about two hours and was moderated by CTV news anchor Kay Bennett. During the debate the ASCSU presidential candidates, Ashley Higgins and Daniela Pineda Soracá, talked about transparency, communication with admissions as potential leaders within the student government, and concerns about the opposing campaigns.

Formal questions formulated for the debate lasted for an hour and then the floor opened to audience member questions.

Both presidential candidates started the debate by sharing what they thought were their personal qualities and experiences as students that have influenced their campaigns.

Higgins focused on her start at CSU as a transfer student and with her involvement in various groups around campus.

“I really found my  home a little later than a lot of other students on campus, but truly found it when I got involved with organizations on campus,” Higgins said.

Higgins also focused on the amount of students she is able to interact with through her involvement on campus.

Soracá focused on her drive as a first-generation student and said it is (attributed it as a reason) why she pursued involvement as a CSU sophomore.

“That has really made the path for me wanting to take up so many opportunities and leadership positions,” Soracá said.

Pineda Soracá also noted there are underrepresented groups on campus that don’t necessarily fit the traditional image of a college student.

“We often think of the traditional CSU student as one who is here for four years and that is typically in their 20s, but its very obvious that we touch the lives of students beyond that demographic, and I really want to be the voice for them as well,” Soracá said.

Both candidates and their running mates talked about transparency between students and the Student Fee Review Board. Higgins and Losolla’s campaign focused on transparency between ASCSU and the student body concerning student fees, while Soracá and Lensky’s campaign focused on making sure the members on the board have the resources they need to make decisions on student fees.

“We really want to be more transparent with student fees,” Higgins’ running mate, Steven Losolla said. “We can’t do anything about mandatory salary and fringe increases, but what we can do is we can assess these increases.”

Soracá’s campaign highlighted the importance of making sure those handling the student fees on the review board are well informed.

“These are students who really care about the student fees,” Soracá’s running mate Mike Lensky said. “We have to fix the board from itself and make sure that students on the board know the budgets.”

Both candidates and their running mates talked about increasing student involvement with ASCSU in the following year. Soracá’s campaign proposed on meeting students to engage, while Higgins’ campaign focused on becoming a mouthpiece for students to the administration.

“We need to meet the students where they are,” Soracá said.

Higgins talked on creating a continuous dialogue between students and administration.

“This year as an organization, we’ve really taken a lot of strides forward,” Higgins said. “With several of my experiences on campus, I’ve been able to have conversations and facilitate conversations with different administration and staff on campus.”

Both presidential and vice presidential candidates talked on the passing of the diversity bill as being the first step in a goal toward increasing diversity in both race and opinion within ASCSU.

“The diversity bill is a great starting point and something that has pushed the organization forward,” Higgins said. “But there is a lot more groundwork to be laid and a lot more conversations to be had.”

Lensky said a main point with the addition of the diversity seats is going to include a respectful culture in Senate.