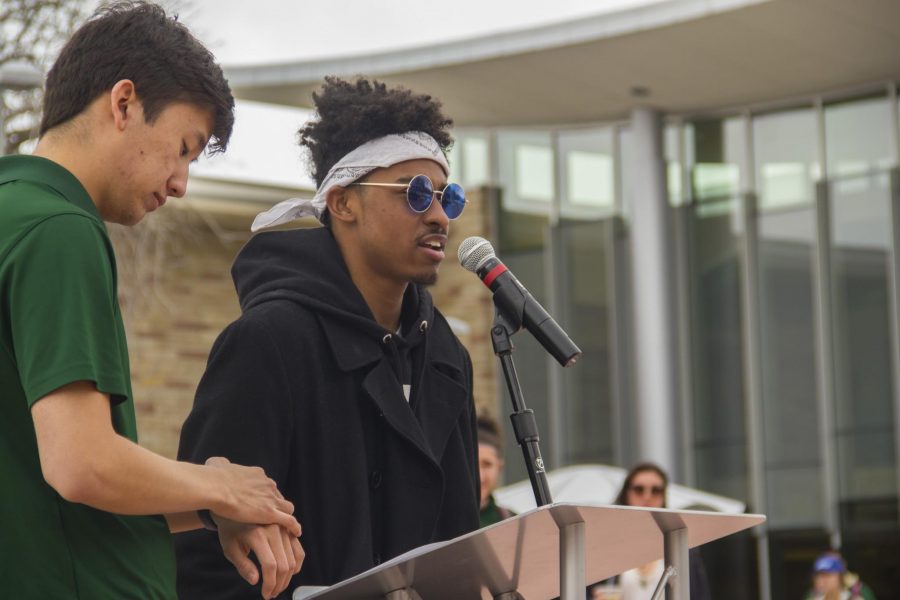 In front of passing students on the plaza in 45-degree weather Friday, the two campaigns for Associated Students of Colorado State University 2016-2017 president debated their campaign platforms. While competing for passerby attention with speakers yelling on the stump, the ASCSU candidates spoke to a small crowd of mostly ASCSU members and passing students.

Both campaigns spoke about their support for the Diversity Bill, and creating a focus on diversity efforts for next year. One of Pineda Soracá’s campaign philosophies is intersectionality, and one of Higgin’s campaign pillars is diversity.

“No matter what type of student you are and no matter how long you’re here (on this campus), we want to make sure you are valued, not labeled,” said Daniela Pineda Soracá, in response to a question asking her to define intersectionality.

Pineda Soracá’s running mate, Mike Lensky, highlighted his experience in senate leadership where he said he resolved issues in senate during the highly debated Diversity Bill.

The Higgins campaign said they want to exemplify servant leadership if elected, and use this leadership style in order to represent the students.

“I believe you should serve someone first before you try to lead them,” said Steven Losolla, the vice presidential candidate for the Higgins campaign. “People will respond better to someone who says, ‘How can I serve you best?’”

Both campaigns also briefly mentioned their desire to “take a look at student fees,” and to continue to work towards changing the city housing ordinance for unrelated adults, commonly known as U+2, to Me+3.

Students present at the debate asked the candidates about their stances on the Diversity Bill, which both campaigns supported, and about their ideas to deal with increased tailgating and underage drinking due to the stadium.

The next ASCSU presidential debate will occur at 7 p.m. on Wednesday in the Lory Student Center Theatre.

Collegian ASCSU reporter Erin Douglas can be reached at news@collegian.com or on twitter @erinmdouglas23.