Trump speaks to record-breaking crowd of supporters, protesters on eve of Nevada caucus 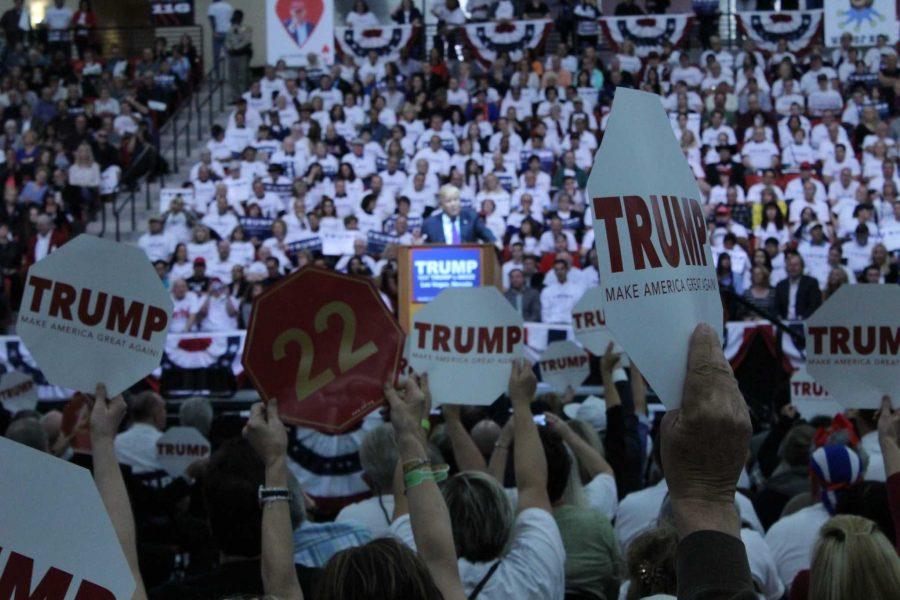 LAS VEGAS – Presidential candidate and businessman Donald Trump held a rally the eve of the Nevada Republican caucus, encouraging them to vote for him Tuesday night.

“Wow this is something, this is a big beautiful crowd,” Trump said to a record-breaking crowd at South Point Arena, Las Vegas. “Unbelievable.”

The crowd was the largest for a political gathering in Las Vegas with 7,000 in attendance, according to a campaign staff member.

Trump told the crowd to go out and vote for him in the state caucus Tuesday, but avoided the term ‘caucus’ because “nobody know what it means.”

Trump referenced his recent success in New Hampshire and his “landslide” win in South Carolina.

He reminded his supporters that just because he is predicted to win does not mean it is a guarantee.

“Just assume we’re gonna tie, don’t ever assume you’re going to lose,” Trump said. “You better be there (caucusing), if you’re not there I’m going to be so angry. Don’t make me have a miserable evening.”

Four people that were protesting were escorted out of the rally. The first man stood behind Trump in the stands and held up a sign that said “Veterans to Trump: End the hate speech against Muslims.”

The second and third protesters were taken out for yelling after Trump said he would repeal Obamacare if he is elected.

After the final protester was kicked out, for an unclear reason, Trump said “I’d like to punch him in the face.”

Wayne Allyn Root, television host and politician, said that Trump is the, “uber of politics” because of his anti-establishment attitude and policies.

Trump touched on issues including illegal immigration, and said that he will build a wall at the Mexico and U.S. border that will be taller than the wall of China, but not wider.

“We’re gonna build that wall don’t you worry about it, and who’s gonna pay for that wall?” Trump asked the crowd, and the crowd answered “Mexico.”

“They think we’re kidding,” Trump said, regarding the wall.

“He tells it like it is, most politicians are too politically correct,” Arpaio said. “Some may not like it, but that’s tough.”

Trump said that having Arpaio’s support proves that he is the toughest on immigration.

“I love Sheriff Joe,” Trump said. “When Sheriff Joe endorses Trump, that means there’s no one like Trump for immigration.”

Trump said that because he is funding his own campaign, he will be able to make decisions that are best for the country rather than doing “favors” for his donors and PACs.

“When I say I’m self-funded folks it means much more than you think,” Trump said.

Trump also said that he wants to keep jobs in the U.S. He said that any company that moves their factory outside the U.S. will be taxed extremely high when their products are sold in the U.S.

Trump said he would get rid of Common Core standards in education. He said that the U.S. is number 30 in the world for education but first in education spending per pupil.

“I spent by far the least amount of money (in my campaign) and I’m by far number one,” Trump said.

Signs shaped like stop signs were given to audience members with the number 22 on one side, standing for the 22 veterans that commit suicide every day, a statistic Trump said was “unthinkable.”

“These are the greatest people; they have more courage, more guts than all of us put together,” Trump said. “We wouldn’t be here if it wasn’t for those people. We’re going to straighten out that VA mess.”

Trump said security is going to be a main priority for him and the U.S. will become a model for the rest of the world to follow in terms of security.

“Whether you’re a Democrat, liberal, conservative, Republican, we all want security,” Trump said.