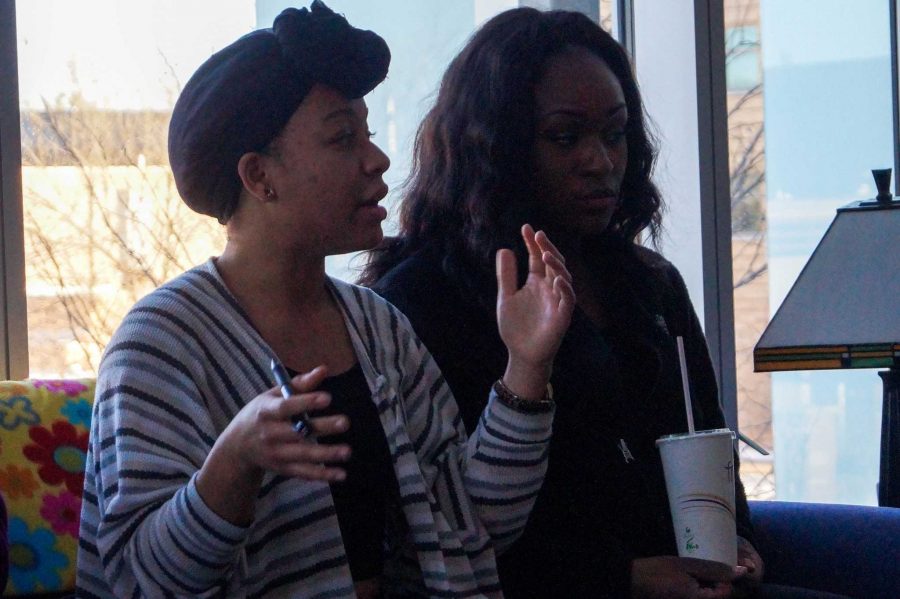 Students and staff participate and discuss topics such as segregation and inequalities for African American people in our society during the Black Lives Matter event on the Lory Student Center.

At it again, the Black/African-American Culture Center at Colorado State University hosted its weekly Real Talk event to discuss controversial and sensitive issues in the Black and African-American community. Tuesday’s discussion centered on Black leaders, allies and privilege.

The discussion was introduced with a YouTube video, “Five Tips for Being an Ally,” in which Franchesca Ramsey discusses how privilege is not necessarily a bad thing. Rather, she says, it means you do not have to deal with certain things because of who you are. In the video, she provides steps for how to successfully be an ally.

Sometimes people believe that since the Civil Rights Movement is over, all racism has been eliminated and privilege doesn’t exist, said Isaiah Martin, a second-year political science student.

“People compare things to historical context, so if I am not seeing another Black man getting hanged, then we are better than they used to be,” Martin said.

Donovon Tate, a senior social work student and one of the group facilitators, then asked, “Why is privilege a difficult concept for people to admit and acknowledge, and why is it is easy for some people to deny another person’s experiences?”

Hands shot up as people were eager to voice their opinions.

“It’s just like racism. People don’t want to be associated with the negative connotation,” said Kwuajzrel Yearby, an undeclared sophomore. “Some people don’t want the pressure and responsibility of having to make a change.”

Many students expressed the idea that sometimes when privilege is talked about, people with privilege feel attacked.

The group facilitators then asked the students how they are allies and what it means to be an ally.

Students and members of the discussion responded with a variety of answers ranging from spreading love and influence to using inclusive words and language.

Ashley Wylde, a senior in communication studies, had a different opinion.

“I am worried about self-identifying as an ally because I believe it’s something to strive towards, not something to attain, and a process where I can always improve and be better,” Wylde said. “I aspire to be an ally, and I see the role of an ally to be a supportive role rather than one that assumes leadership of a movement.”

In response to Wylde’s comment, Kahlea Khabir, a third-year ethnic studies and sociology major, said allies should not be speaking on behalf of other people. Rather, they should be working to make sure those others are heard.

The next question proposed to the group was, “Can allies be leaders, and what does that role of a leadership look like?”

Martin said leadership does not necessarily indicate a person in a position of power.

“Leadership is about someone who is willing to get on the level of the people they are working with,” he said. “Just like Martin Luther King — he was in the marches, not telling people what to do, but actually getting in the dirt and working side-by-side with the people.”

The group then discussed whether leaders and allies should strive for recognition.

“Why can’t we give recognition to people who aren’t of our color and don’t have our experiences, yet still give up their privileges and go against their own people to be leaders and advocates and stand up as our allies?” Yearby said.

On the other hand, Omo Odia, a senior business marketing major, said that people should not have to be rewarded for standing up for a certain cause.

“If you are generally interested and want to make a change, you should not get any special recognition because you should see yourself as an equal to the oppressed group, since they are there doing the same thing that you are,” Odia said.

Students went back and forth on whether recognition for leadership and being an ally should be considered.

“We should focus on praising each other for our continuous efforts to learn from each other, so that these issues and injustices can be resolved and keeping attention to the issue at hand,” Odia said.