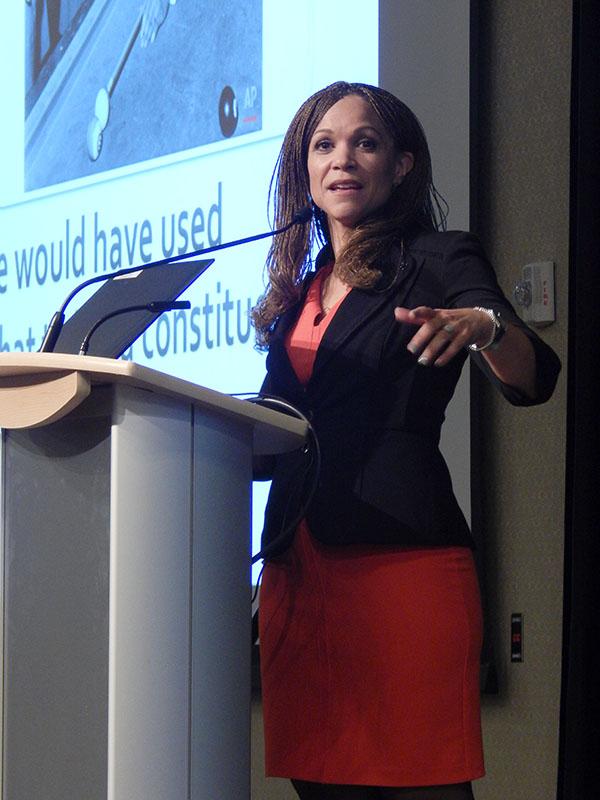 From “black bodies” to the uterus to Jeb Bush — professor, author and television host Melissa Harris-Perry touched on all these subjects as she spoke to a room full of students and community members at Colorado State University Sunday. The presentation ended with a standing ovation.

Harris-Perry spoke about Black History Month in the context of the Black Lives Matter movement. She noted that her speech at CSU coincided with the 51st anniversary of the Malcolm X assassination.

“It’s an interesting kind of moment to mark … (because of) how ordinary, how commonplace it is for us, how expected it is for us to see felled black bodies,” Harris-Perry said while displaying an image of Malcolm X after his assassination.

She went through a timeline, following the Obama inauguration, of names of some of the black lives that have been lost, including Reinisha McBride, who was fatally shot through a screen door, and Eric Harris, who was shot and killed by a volunteer with the police department.

But Harris-Perry also said it is important to “not to have to make (the black bodies) perfect in their death.” According to her, making these people either perfect or utterly imperfect comes at a cost, because as humans we are neither villains nor saints.

From race and humanity, Harris-Perry transitioned to the subject of reproduction. Displaying a projected illustration of the uterus, she noted the amount of public discourse that happens about this organ.

Because citizenship is acquired by birth, Harris-Perry argued that the uterus is such a political and contested subject because it is “the actual passageway of citizenship.”

She went on to make a provocative suggestion.

“If I am a person at the point of conception, it does not matter where I am born. It is a matter of where I’m conceived,” Harris-Perry said.

Harris-Perry also spoke about the changing paradigm of white America. She used former President George H.W. Bush’s son and Ivy League school graduate Jeb Bush, who recently dropped out of the presidential race, as an example.

“The thing that is the current construction of an authentic American whiteness right now is actually not Jeb Bush,” Harris-Perry said.

In addition to that, Harris-Perry spoke about the discourse at universities. She urged the need to deal with expression of ideas that may be “deeply problematic” through dialogue rather than through zero-tolerance polices.

The breadth of topics in Harris-Perry’s speech helped to engage a variety of audiences with unique points of view.

“Melissa has a way of … contextualizing what’s going on in our communities in a way that brings it home for us regardless of it being a black community, Latino community,” said Marpessa Allen, who drove an hour from Aurora to attend the event.