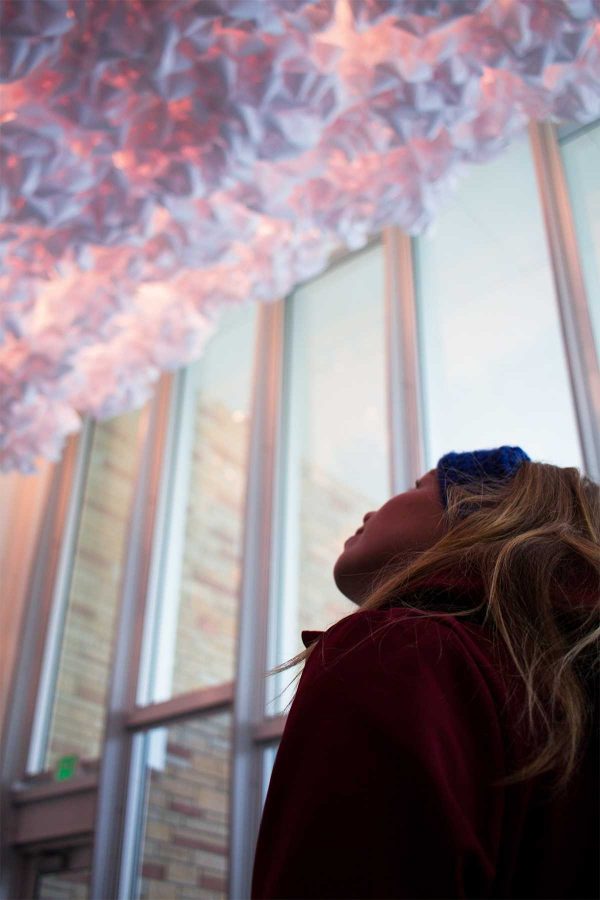 Cari Heroux, International Studies Major, gazes up into the textured, glowing art exhibit at the Curfman Gallery located in the LSC. (The Exhibit depicted was created by Mark Rumsey and it's titled, "Mammatocumulus.") (Photo credit: Kevin Olson.)

Looking into the Curfman Gallery, just a few strides away from Intermissions Coffee in the Lory Student Center, it may appear empty at first. After walking towards the back of the gallery and looking up, a cascade of paper clouds become visible.

The exhibit, “Mammatocumulus,” was created by artist Mark Rumsey with the help of  approximately 80 CSU student volunteers. Assembly of the piece began Jan. 24. Construction went on from 12-8 p.m. leading up to the Jan. 28 grand opening.

“It took a lot of time and a lot of people to help,” said volunteer Bethany McCabe, an undeclared freshman.

The finished product, made of 10,000 pieces of folded paper, appears to be floating above the viewer. The community it formed through the process of construction represents an additional artistic element.

“On a basic level, (inspiration) comes from the desire to transform a space. On another level, it (is) about trying to engage a community,” Rumsey wrote in an email to the Collegian. “The piece was built with the help of over 80 volunteers, each contributing something of themselves to it.”

Not only did students play a role in the construction of “Mammatocumulus,” they also played a role in the decision of what artist to invite.

“Ultimately, a lot of the exhibits that go into the Curfman Gallery are decided by CSU students,” said LSC Arts Program Manager Dough Sink.

Choosing Rumsey’s art for the gallery was a multi-step process. Artists nationwide submitted applications to display their art in the gallery. After Sink filtered through the applications, he and his team came to a consensus on Rumsey.

“(Rumsey) has this history of using really common place materials to transform a space, and I was really excited to do it because we have this new exhibition space,” Sink said.

The Curfman Gallery opened in 1968 and was later named after 5o-year CSU professor Jack Curfman in 1985. Outside his work in education, Curfman pioneered the first places to display art on campus.

The Curfman Gallery has virtually stayed in the same place over the years, but in 2014, renovations were completed and the gallery moved up higher so it could blend with the main level, instead of sitting half a story below it.

“It’s a much more prominent place. We realized that it was a pretty unique feature in the student center and we’re really excited about it,” Sink said.

The Hallery is currently displaying a series of portraits by graphic novelist and CSU graduate Moriah Hummer. Hummer will be visiting the LSC on Feb. 10 from 4:30 – 7:30 p.m. for an artist reception.

The Duhesa Gallery focuses exclusively on Native American Artists. The work of Cannupa Hanska Luger of Santa Fe, New Mexico, is on display until June 26.

The LSC Arts Program is currently accepting student art submissions for their annual Student Art Exhibition, which is set to premier following spring break. All submission are due by Feb. 26.

Collegian Reporter Nicole Towne can be reached online at news@collegian.com or via Twitter @nicole_towne21.