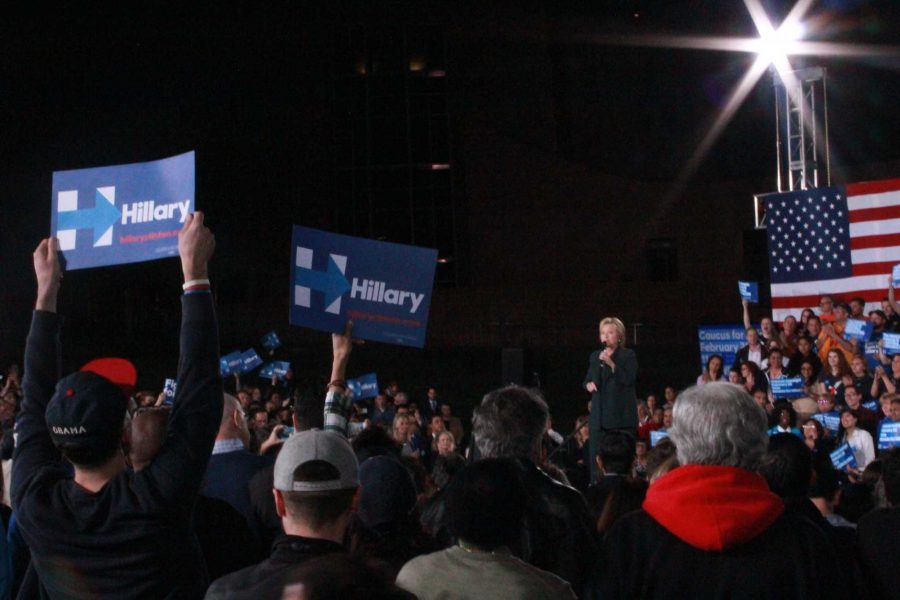 The first speaker at the rally told supporters to text REMINDER to a a campaign number and to receive a reminder on their phone Saturday morning to go support the former First Lady in the Nevada caucus. Those participating in the Nevada caucus will have to arrive at caucus locations throughout the state by 11 a.m. to be able to participate.

Hillary Clinton focused heavily on solving the problem of student debt and said that her plan would create an end date where each student will stop paying off their student debt.

“The federal government will not be in the business of making money off students,” Hillary Clinton said.

Her husband and former president Bill Clinton said she wants to make higher education affordable for all people, including those who can not afford it currently.

“My plan does not include making it free for Donald Trump’s kids,” Hillary Clinton said.

She spoke directly to Nevadans when talking about the 2008 presidential race, where Clinton won with 50.8 percent of the vote in Nevada but ended up dropping out and endorsing President Barack Obama. Days after Obama was elected, Hillary Clinton said she was asked to be Secretary of State.

She then talked about the recent recession and how she tried to defend states like Nevada who where hit the hardest.

“I went to Wall Street and called them out,” she said. “I told them, ‘you are going to ruin this country.'”

Celebrity guest appearances included speeches from America Ferrera and Eva Longoria, who talked about the former secretary of state’s plans to combat issues in student debt, immigration reform and poverty.

“We need a candidate who can produce real results, who can change peoples lives in a meaningful way,” Ferrera said.

Ferrera also said that Hillary Clinton is a better choice for the democratic candidate because she is not a one-issue candidate, like she said Bernie Sanders is.

Chloe Moretz was also in attendance at the rally, though she did not speak to the audience. She helped to phone bank for Hillary Clinton earlier in the day.

Moretz said that she did not college when she was 18.

“I’m in a privileged position where I don’t need a college degree, but under Hillary I’d be able to go back to college,” Moretz said in an interview with the Collegian.

Collegian News Editors Erik Petrovich and Sady Swanson can be reached at news@collegian.com or on Twitter at @sadyswan.