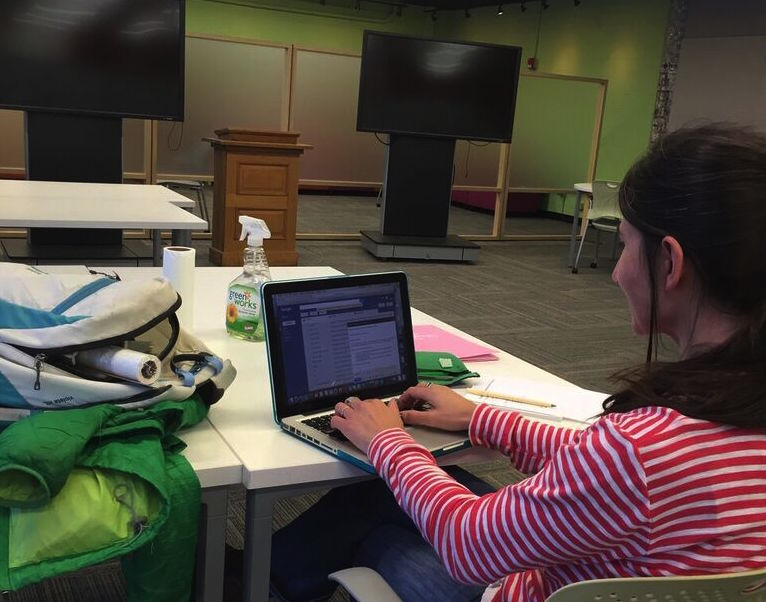 A video posted on the Colorado State University YouTube channel provides a tour of the [d] lab.

When Katharine Leigh, a Colorado State University professor of interior design and merchandising, first started a project to design an interactive study space for her students, she had no idea it would win an award that only a few people earn.

What started out as an idea to provide more space for her students to collaborate and eat developed into a whole new study space and a prestigious award to show for it.

The [d] lab Leigh designed is a classroom that provides students with a space to learn in a way that is more than just sitting in seats. There are mobile tables, a place to drink coffee and plenty of space to spread out and discuss ideas with classmates. However, Leigh said this lab was originally second to a different idea.

“My students were planning a type of gallery in order to gain more notoriety,” she said. “I think all people think we do is fluff pillows, but we are actually a research-based design program.”

Leigh presented the idea to a board in order to get the money she needed  to start the project. While this idea was being developed, Leigh started to think of another.

“If you’ve ever been in Aylesworth, there is no place for students to sit anywhere,” she said.

She realized there was not much in that building that catered to students in between classes.

“There are a couple vending machines, but not much in the way of amenity,” she said. “And we are kind of a long walk from any kind of coffee in the winter.”

After thinking about this, she decided a coffee spot would be another idea she could present to the board. She presented both options for grant money, and the coffee spot came out as the cheaper and more favored option. Leigh decided to add in an interactive study space with a computer lab and create one big collaborative classroom for students to learn.

Bryony Wagner, a junior interior design major, said this lab is a much better environment to work in than the other traditional classrooms.

“I would say that I really enjoy the [d] lab opposed to other classrooms, especially in Aylesworth,” she said.

“The [d] lab tables allow us to move around and spread out our stuff without being confined to a desk/chair combo that is tiny and uncomfortable,” she said. “The colors are energizing and having a space with a microwave and eating utensils is nice because we spend a lot of time at school.”

“I haven’t experienced another study space that is comparable,” Mansker said. “The [d] lab really is like a second home, and Professor Leigh did a wonderful job in identifying the needs of the occupants.”

This accommodating and multi-faceted design plan led to Leigh and her team winning an award for the new classroom without even realizing they had qualified.

“It just happened after this that we had met the requirements for the EDRA award,” Leigh said.

This award from the Environmental Design and Research Association is an award that few in the country receive in recognition for above and beyond design initiative. Leigh said she is grateful for this recognition of her team’s hard work and hopes this encourages CSU to put more emphasis on what efficient interior design can do for students.

“What I’d like to see come from this is that CSU takes a leadership role in evidence-based design research,” Leigh said.

Collegian Reporter Katy Mueller can be contacted at news@collegian or on Twitter @katymueller13.