At the Old Town Foodie Walk, sampling is encouraged 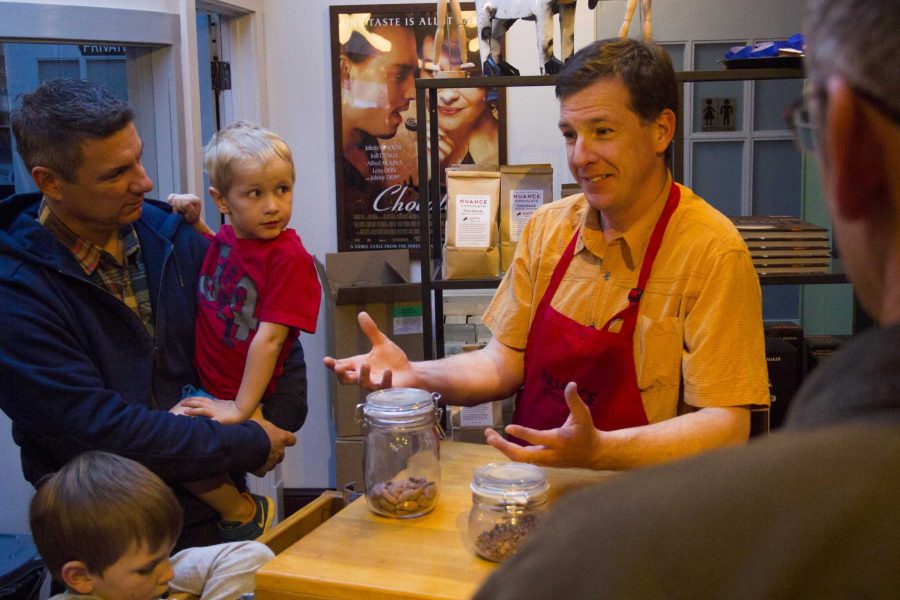 Toby Gadd, owner of Nuance Chocolate, explained the process that makes their chocolate so good.

Every third Friday evening of the month in Old Town Fort Collins, food takes center stage. Put on by Downtown Fort Collins, the Foodie Walk is a “monthly self-guided foodie tour, geared toward the chef in all of us” that began in 2012. A foodie, as it would be, is anyone who takes a vested interest in food. The Foodie Walk allows you to make your way from place to place, following a specified map, sampling your way down College Avenue and Walnut Street.

Last Friday’s event included participants ranging from Nuance Chocolate to The Cupboard to The Welsh Rabbit Cheese Shop. Twelve locations offered locals the chance to meander and enjoy a taste of Fort Collins for no cost.

One of the participants, Ku Cha House of Tea, is relatively new to the Fort Collins scene — it opened in August 2015. It’s a traditional Chinese teahouse, and their specialty is tea samples, which they were handing out Friday. Friday’s sample option? Green tea chrysanthemum tea.

“You can participate in our Foodie Walk any day of the month because it’s essentially the same. We always have tea samples,” said shift leader Conner Matheny. “It’s a great way to get exposure.”

Marcia Lilly, candy buyer and events coordinator at The Cupboard, said that the Foodie Walk brings out a sense of community.

“It brings people into the store, and it gives people a reason to come downtown, and keep coming downtown,” Lilly said. “There’s always food to be had (here).”

The Cupboard tries to relate their food to an event or holiday. In February 2015, also President’s month, they did a theme of “president’s favorites,” and served food that Abe Lincoln or George Washington might have enjoyed. Friday’s samples at The Cupboard included cast-iron cornbread and chili made in a Le Creuset Dutch oven.

“We try to have themes,” said Nemo Ekanayake, closing manager. “Past themes have been sampling out our different types of chocolate.”

Kilwins has been in Fort Collins for 20 years.

“We’re established. We want to make sure that we keep a local feel and local vibe,” Ekanayake said.

If you’re a self-proclaimed epicure or fine food connoisseur, plan on attending next month’s walk.

Collegian Diversity Beat Reporter Clarissa Davies can be reached at news@collegian.com or on Twitter @DaviesClarissa.