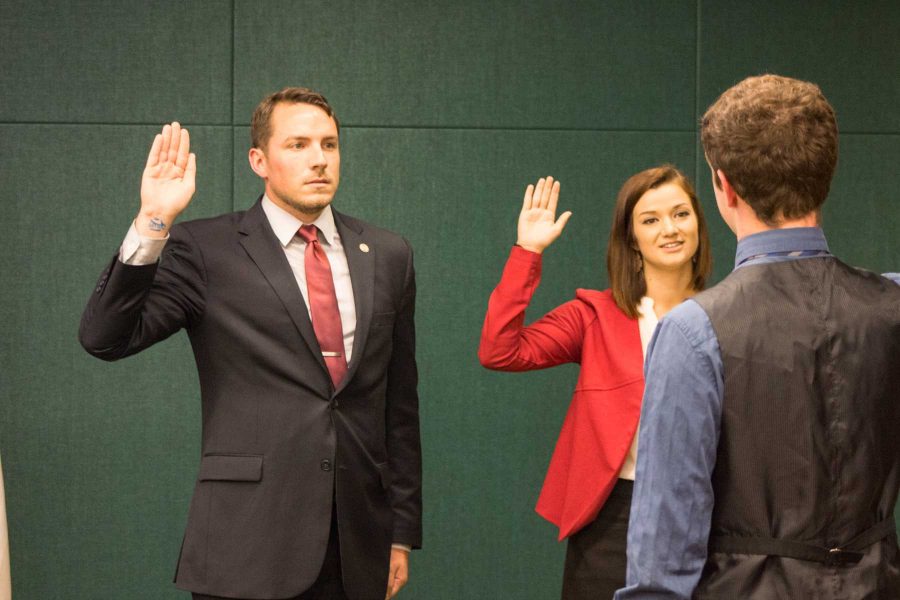 According to multiple sources, the student office environment of the Associated Students of Colorado State University alienated certain demographic groups — in particular, women — over the summer and during the first semester of this academic year.

Three women in leadership positions quit during this time span, and each said that the internal culture was a contributing factor of their resignation.

“A lot of things were tolerated that have absolutely no place in that body (of Senate),” said Kelsey Bigham, previously the parliamentarian. “Sexism and disrespect (were tolerated). Personally, I experienced the misogynistic side of things. I know that other women in the body had similar experiences, which is really unfortunate.”

According to Bigham, instances of sexism included comments that she did not have a brain of her own and that she was “just a ploy of the executive branch.” A comment related to Senate needing to look more like a Hooters was also made, Bigham said.

Instances that were perceived as sexist, such as the Hooters comment, were interpreted incorrectly and were unfounded, said Juan Caro, the Senate recruitment officer. According to Caro, after witnesses and individuals accused in those specific incidents spoke with ASCSU advisors, the accusations were found to be weak and exaggerated.

“I was very committed to ASCSU,” Bingham said. “That commitment was unwavering until the culture drove me away.”

During the summer, some women stopped coming into the office, Michelle Sogge said. Sogge was the Senate membership officer until she resigned after one year at ASCSU in October of 2015. After her resignation, the position was filled by Mike Lensky.

“Many women began to feel afraid to come in,” Sogge said. “They were not included, and when they came into the office, no one greeted them. It was a very distant environment.”

“Ultimately, I’d be lying if I said that the culture within ASCSU didn’t drive me out,” Albaugh said. “I’ve thought long and hard about if what I was experiencing was because I’m a woman, and I think it does play a factor in it. In no way do I think that anyone is intentionally sexist in the organization, but there are biases that exist. It was the not taking me seriously, the lack of responsibility put on my plate and the idea I was getting was that I needed to let ‘the big boys’ do their job.”

Sogge also said she felt hesitant when she joined ASCSU because most of the leadership identified as white and male.

“I already felt like I would not be listened to (when I joined), and that feeling just increased exponentially (throughout my time there),” Sogge said.

Specific instances included comments made toward women about their physical appearance and an aggressive pursuit for a relationship that made one woman feel physically uncomfortable in the office, Sogge said. Her position sometimes included internal conflict resolution.

“It was just generally a sexist and misogynistic culture,” Sogge said. “It wasn’t always overt, but there were cases when it was.”

“I think (my resignation) was certainly all tied to the culture of ASCSU,” Bigham said. “It’s hard to make a change. The fact of the matter was that it felt like no one in the organization saw the issues.”

As a result of some of the instances related to sexism and harassment, resolution No. 4512 was unanimously passed Dec. 9 to change Senate bylaws and mandate that all members of the legislative branch complete online sexual harassment training.

“While sometimes we may disagree with each other, one thing that we should not have to experience is sexual harassment,” said Phillipp Dedogryuk, the author of the resolution, while he was speaking in front of Senate in December. “How can we maintain this balance (of speaking for the students and working with the University) when we are faced with an internal problem? An internal problem that makes people feel so unwelcome that they resign.”

All paid positions at ASCSU require sexual harassment training online, as well as all of Senate as a result of the legislation. Members of ASCSU that are not paid, such as assistant directors, are not required to complete it, Sydoriak said.

Legislation that would create positions at ASCSU for cultural and gender advocacy center representatives has been introduced several times since the fall of 2013. A version of this idea led to creating the Inclusive Excellence Committee.

However, according to multiple sources, individuals were not welcomed if they were new or identified differently than the majority of people at ASCSU.

“There’s not much social justice or inclusive language (used at ASCSU),” said Kwon Atlas, the author of legislation that would create cultural and gender advocacy representatives. “You don’t see those kind of trends there, like you would see in other leadership areas on campus. It just creates a culture where students of color and students of different identities don’t feel welcome.”

A version of this legislation is on the Senate agenda for Feb. 10, this time being introduced by both President Sydoriak and Atlas.

“(The culture) is more than having ‘x’ amount of people at the table,” Albaugh said. “It’s about making people in marginalized identities feel like they are valued when they come to the organization. Right now, it’s whoever talks the loudest or has the biggest resume. They know the political system and they know the University, but the gap that is missing is that they don’t know the students.”

The current abstract purpose of the legislation is “to create senator seats for the cultural, resource and advocacy centers at CSU to improve equity, diversity and inclusion.”

“I’m a middle-class, white male, and sometimes it is hard to check your privilege or be knowledgeable,” said Taylor Bryan, a senator at ASCSU. “But I have heard from others (who identified differently) that being a female makes it more difficult to be welcomed as well as identifying as a minority makes it difficult. I definitely think that there is an issue with proper representation, but at the same time, you see that at the state and the federal level (of government) as well.”

Other members of ASCSU said they do not believe the internal culture is a problem, and that perceptions of a contingent culture are based on the competitiveness inherent in the organization.

“The culture (of Senate) is very accepting and very competitive,” Caro said. “No one here is finding dirt on you or trying to ruin your life. Everyone is working for the same cause and it’s to make the student body’s experience better.”

Caro said he might have made some enemies when he recruited a large number of senators during the fall semester.

“People are scared of change, and I recruited people with strong voices,” Caro said. “When new senators come in and go against the norm, people get shocked and say, ‘Hey, I don’t like the culture of ASCSU.’ But, it’s not that the environment became more hostile, it’s that we have more opinions. With more opinions, there’s going to be more criticism. In politics, like in science, you need criticism.”

Collegian Reporter Erin Douglas can be reached at news@collegian.com or via Twitter @erinmdouglas23.