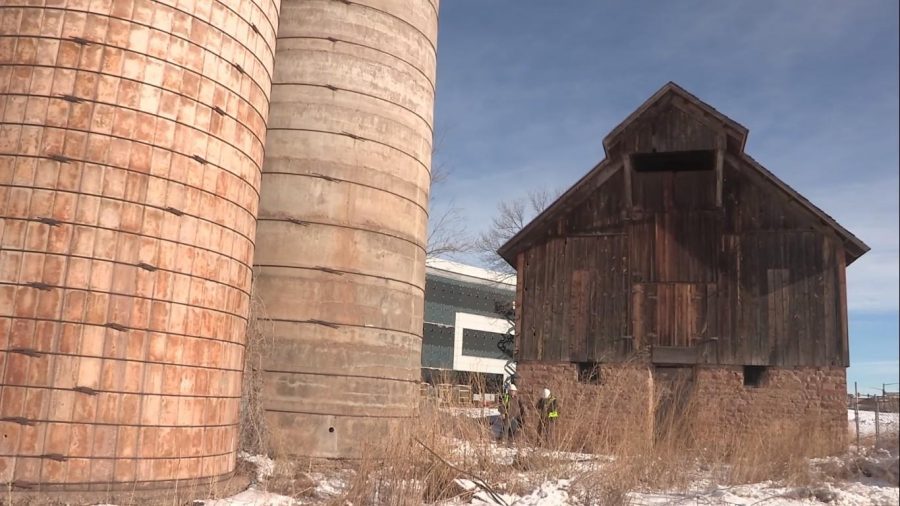 The two silos are located to the southwest of Woodward Inc. office complex on Lincoln St. and Lemay Ave. Woodward has proposed that the silos be classified as an "imminent danger" so that they can be repurposed. (Photo credit: City of Fort Collins)

Two silos built in 1912 and 1913 could pose an “imminent danger” to an office complex owned by energy system company Woodward, Inc., who have asked the city to repurpose the historical sites.

After a lengthy debate on the definition of “imminent” at a city council meeting Jan. 19, the council remanded the proposal to the Building Review Board, putting off a decision on the structures’ future until a later date.

According to engineering firm Martin and Martin, who evaluated the structural integrity of the two silos on behalf of Woodward, Inc., the silos may pose a threat to the new corporate complex due to inadequate storage of the structures in the past.

“The weakened state of the concrete walls is currently adequate for an empty structure, but without intervention, the silos will continue to deteriorate and will eventually become unstable and unsafe,” said Martin and Martin associate Nicole Lane.

Exponent Failure Analysis associate Paul Bennet stated that while under the current Structure and Premises Condition Code, the silos should be repaired. If declared to be historic structures, no work could be done as long as a hazard does not exist. He points out that by building a fence around the silo that would prevent people from being near it, this requirement would be fulfilled.

The two silos are part of the historic Coy-Hoffman farmstead, which was established in 1862 by farming pioneers John and Emily Coy. The farmstead stood largely untouched for about 100 years until the Link-n-Greens golf course demolished the farmstead house in 1991 to make way for a golf course. Now, there stands a barn, the silos and a few other buildings with the new corporate offices located nearby.

“This is a very rare resource in Fort Collins and must be saved for posterity,” local preservationist Carol Tunner said in a public meeting with the Building Review Board. “Multiple structural engineers say they can be repaired and saved. They are truly a landmark, in every sense of the word.”

The Hoffman family, direct relatives of the farmstead’s founders, supported Woodward, Inc.’s plans to repurpose the silos as it would maintain historical value while also maintaining the safety of the site.

What stands in the way of repairs on the site is the definition of “imminent,” according to city building codes. Currently, the silos are considered “dangerous,” which does not require that the silos be demolished immediately, but rather that they be stabilized or repaired.

If Woodward, Inc.’s appeal to reclassify the silos as an “imminent danger” is approved, “the silos would be required to be repaired or demolished, per the owners’ choice,” according to a city council document.

The Building Review Board has been tasked by city council to review the site to determine if the classification of the silos should be updated.