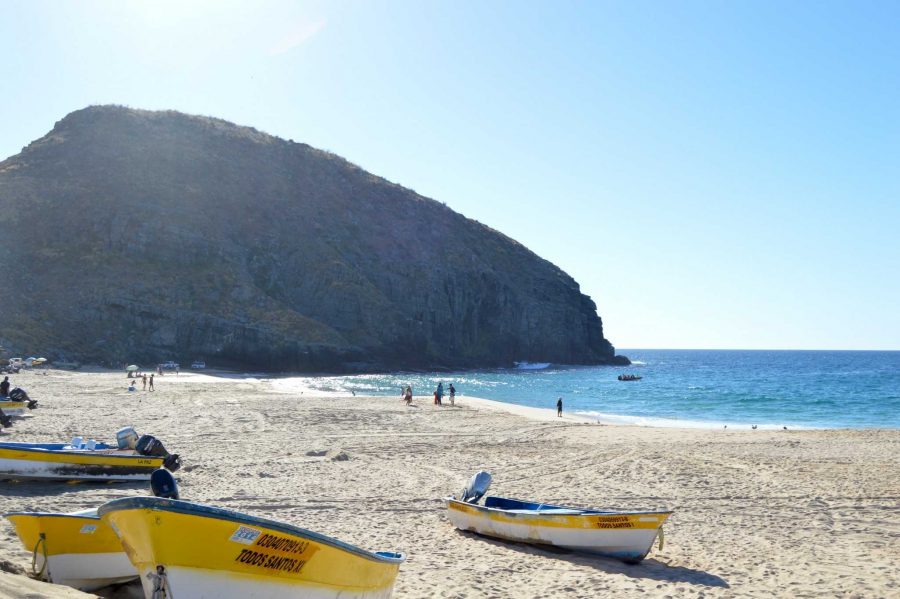 Punta Lobos beach sits south of Todos Santos, Mexico. On our drive in, we lost the paved road for dirt and sand. A little ways down, we passed a small shelter with fisherman hiding away from the midday heat. Our guide stopped the car and spoke to them before we headed forward. Someone joked that talking to them is like paying the toll to get through.

About two months ago, this road was completely blocked by protesting fisherman. Now, a small group stand watch over the road and the people who drive past to the beach, blocking construction workers from passing through.

What used to be mangroves and sand is now concrete. A large rectangular foundation and sea wall extends north up the beach, with half-built structures popping up from the concrete. Construction workers for the company MIRA had been building a hotel and housing area, but because of the protests, the building that is a part of the Tres Santos development has stopped, and now the lot sits empty and adjacent a beach full of tourists and locals.

Mediation between the housing development and fisherman has begun, but it is a slow process, with meetings involving the state municipality, according to John Moreno, a local lawyer representing the fisherman.

According to Moreno, the fishermen’s plight is telling of a larger issue the housing development could cause for the area of Todos Santos. The development has plans that could triple the population of the town and provide a strain on many environmental resources, according to Moreno.

“They are greenwashing everyone and claiming it’s sustainable, and it’s not,” Moreno said.

Eric Adams, a professor at MIT who works in environmental fluid mechanics and engineering, is a part-time resident of Todos Santos who recently saw the constructed sea wall. Adams said that from a civil engineering standpoint, the sea wall is the most problematic part of the housing development.

“It has added to the erosion of the beach,” Adams said. “There have been a couple of storms where the riprap has come off.”

Riprap are boulders placed against a sea wall to help protect against high tides. In the past year, there have been storms that have had high enough waves to move these rocks away from the sea wall and into other places on the shore, which can ultimately hit fishermen’s boats, damaging motors and other parts, according to Adams.

Adams also said the sea wall contributes to a loss of sand. Eroding sand can be a natural occurrence that fluctuates with the season, “but when you have a wall and if the waves reach the wall … then the wave reflects and that energy helps erode sand,” Adams said.

Once we had parked and walked toward the beach, one of our guides pointed out how much space fisherman used to have to access to on the beach. Because of how harsh the Pacific waves can be, where the fisherman decide to depart and return to the shore varies depending on how much shoreline they have.

The return of the boats is a dramatic scene that takes space to do safely. The fisherman time the docking with the incoming waves, riding the top of the wave at high speeds to reach the shore. As we walked the beach, a boat full of tourists, out for a Sunday ride, screamed and yelped as they zoomed back to the shore on the power of the Pacific, landing back on the beach with sand flying from the spinning back motor.

It used to be that that two fishing co-ops — the red and yellow fisherman — could park their boats wherever they like, but now the concrete sea wall has limited their access points, leaving both co-ops to stage their boats on the south side of the beach.

The two co-ops have always had a tense relationship. Boats are clearly marked with yellow or red to differentiate the two as they work to catch and sell the most fish. Only the red fisherman are protesting the construction. The yellow have not taken a stance and even use the concrete structure Tres Santos built as a place to park their boats during high tide.

Tres Santos promised to build and provide facilities for the fisherman and assured them that the company wanted their presence on the beach that they planned to fill with high end homes.

Yet as construction on the sea wall began, the red fisherman altered their view on the plan and protested what they saw to be an environmental and social threat to their profession, a way of life that has historically been on the beach for generations.

Ernie Glesner, the project director for Tres Santos, called the fisherman’s protest a perfect storm of events. The head fisherman of the red coop died, leaving the group without direction, according to Glesner. Around the same time, a tidal event caused majority of the beach to disappear from Punta Lobos.

Since then, the beach has returned but mediation is still ongoing. Glesner said the company hopes to provide the fisherman legal documentation and security to make sure they feel their presence is wanted on the beach.

“The fisherman are a big part of why we want to be on the beach — it’s super cool, we want them to prosper,” Glesner said. “I don’t want to change their livelihood. I think having them down there is a great tradition.”

Before Tres Santos could start their development, they had to file a comprehensive environmental report called a MIA. The report details every aspect of the project’s impact on the environment, from the species that live in the development area, to whether or not there are historic buildings or grave sites on the property.

Despite this, some such as Moreno have questioned the MIA Tres Santos put forth. According to Moreno, if the mediation process with the fisherman fail, then the next course of action will be to sue the government over documents such as the MIA that may be proven to be invalid upon review.

Moreno claims that parts of the MIA have plagiarized chapters that were directly copied from other environmental studies in different regions. If the one document is proven in a court to be illegitimate, then the entire development would be considered illegal.

According to Glesner, the development has done all it can in regard to the MIA.

“If there is something not right in there, we have done everything we have done in the checklist, and it has been approved — I don’t know what else that we can do,” Glesner said.

The report was approved by Semarnat, the Mexican equivalent to the EPA. According to Beatriz Ledesma, a project subdirector for Tres Santos, officials from Semarnat have consistently visited the sites to make sure everything is up to code.

According to Moreno, settling this dispute legally would be the nuclear option that could cause a bad reputation for Todos Santos if future investors are too afraid to start projects in the town.

Instead, Moreno would like to see a compromise with the fisherman that could lead to other community lead changes in the development.

“They have to be open to modifying their development and make certain specific adjustments that allow them to integrate and that will also lessen the impacts that they will have on the community,” he said.

Collegian Executive Skyler Leonard can be reached at editor@collegian.com or via Twitter @Skyler_Leonard.