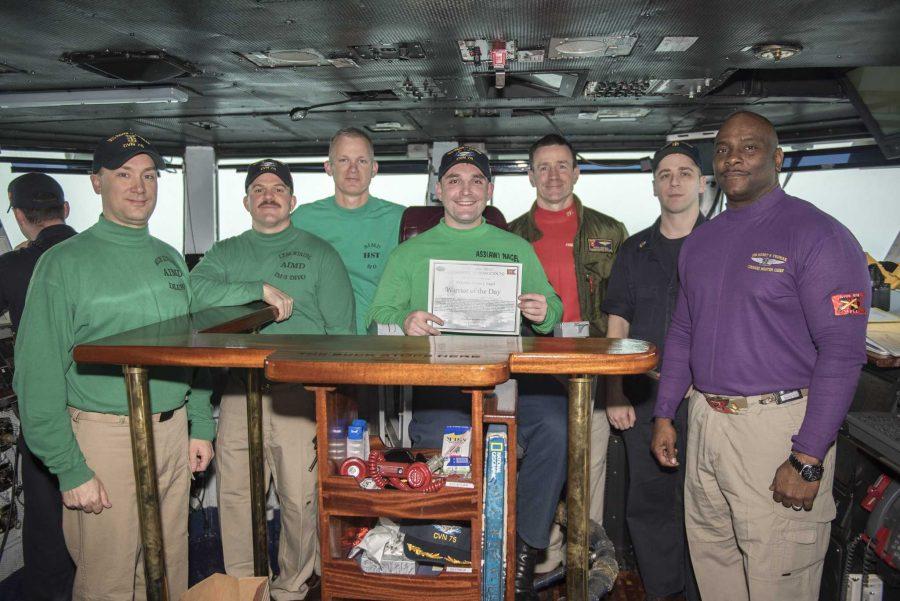 One day, Fossil Ridge High School grad Petty Officer Dustin Nagel said he hopes to receive a degree from Colorado State University. But for now, he is on his second deployment aboard the USS Harry S. Truman and was recently recognized as Warrior of the Day.

The Warrior of the Day Award is implemented to let the sailors from different departments aboard the ship know they are doing an exceptional job, according to Mass Communication Specialist 3rd Class Bobby Siens with the Media Department on the USS Harry S. Truman.

“They then meet the captain on the bridge and are given a certificate for the award, a coin from the captain, and sit in the captain’s chair for a personal conversation with the captain followed by a photograph,” said Siens, a Colorado State University alumnus.

Nagel is part of the Aircraft Intermediate Maintenance Department, which maintains the material damage control readiness for the AIMD. He and six other sailors are responsible for the equipment necessary to handle an emergency.

“In an emergency, I would be first on scene to help ensure that all of the right personnel are in place to say fight a fire or handle a flooding situation,” Nagel said.

Lieutenant Colonel James F. Blanton is the professor of military science for the Army ROTC program at Colorado State University.

“Every solider and sailor knows that their job is important, but some days that can just get lost,” Blanton said. “Most of the entry-level sailors aren’t really sure how their life fits into the giant cog that is an aircraft carrier.”

The USS Harry S. Truman is an aircraft carrier home to over 4,000 soldiers. Nagel has traveled on the ship to countries like France, Spain and Croatia over his three years enlisted in the Navy, but he said he is still a die-hard Ram fan.

“The chance to sit there to talk to the captain, and I hope express their ideas, helps them make sense of their place on the aircraft carrier,” Blanton said.

Collegian Reporter Savannah Hoag can be reached at news@colostate.edu or on Twitter @sav_hoag.