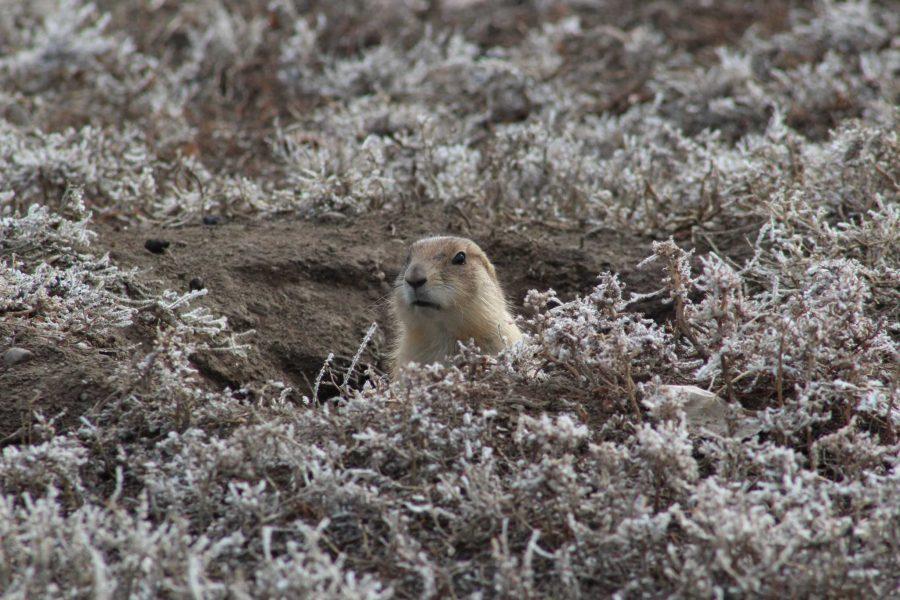 A prairie dog looks out of it's burrow at the corner of Lemay Ave. and Buckingham St. The colony is threatened by development on the land, and may be exterminated if they cannot find a new home. (Photo Credit: Chapman Croskell)

For those worried about the future of Fort Collins prairie dog colonies, city officials have bittersweet news: The 65-acre Cathy Fromme Prairie located south of Fort Collins could become the new home for prairie dogs located on a 17-acre plot of land owned by New Belgium Brewing Co., but the colony on a seven-acre plot of land poised to become the site of a new brewery and storage facility may be exterminated due to development conflicts.

Helen Taylor, a founder of the Prairie Dog Relocation Group, said it was ironic that the colony that inspired her to start a relocation effort may be exterminated just after the city offered land that could be used for other colonies.

“Stan Scott said he will not wait to break ground, because he is worried about the timing of his business being brought to market,” Taylor said. “Time has run out at the brewery site.”

The Prairie Dog Relocation Group began working with city council to find a city-owned area for the prairie dogs to be moved to early last year. After suggesting Soapstone Natural Area and Meadow Springs Ranch, Wendy Williams, an assistant city manager who oversees the Department of Natural Areas, said Cathy Fromme Prairie was chosen instead because it was more suited to the city’s and the colony’s needs.

“It’s an area that has existing prairie dog colonies,” Williams said. “We had concerns with Soapstone and Meadow Springs because of agreements with the state and neighboring property owners about controlling the spread of the colonies.”

Williams said the topography of Cathy Fromme Prairie, west of Taft Hill Road, would make the overall effort more successful. There is a large ditch on one side of the prairie and a hill on the other, which would help contain the relocated colonies within the prairie.

According to Taylor, a single relocation effort could take more than a month. Because prairie dogs begin breeding in March, the same month that development will begin on Stan Scott’s land, the city plans to instead work with the Prairie Dog Coalition to focus on relocating a colony located on 17 acres of land owned by New Belgium which has “a greater chance” to be successfully moved.

“It’s probably not the ideal time to be moving the prairie dogs,” Williams said. “Even if that does not work, the other colonies have a greater chance of survival.”

The current method of relocation is to map out prairie dog coteries, or families, and relocate them in a way that keeps them together. Wade Meyer, a wildlife biologist with the Department of Natural Areas, said separation of family members during relocation is a leading cause of death in relocated colonies.

According to the Prairie Dog Coalition, the most successful way to relocate a prairie dog colony is to map the colony, locate family units within the colony, set live traps within those coteries and then let the prairie dogs become accustomed to the traps over the course of a week. When the prairie dogs have been trapped, they are moved to the new location on the same day, where new burrows have already been created for the animals. They are then monitored over the course of a year to ensure that the colony stays healthy.

The Prairie Dog Relocation Group said the most optimal time of year to relocate a colony is September, as the pups would have had a chance to mature and the colony would have the best chance of staying healthy post-move. Taylor said while she is disappointed that the colony on Lemay and Buckingham streets may not be moved, she is still hopeful for future efforts within the city.

“With exception to the Lemay and Buckingham prairie dogs, it’s possible we will be able to do a translocation in Fort Collins and influence policy in the future,” Taylor said. “There’s a lot that still has to happen, but it’s great that the city is willing to use nonlethal methods.”

Collegian Assistant News Editor Erik Petrovich can be reached at news@collegian.com or on Twitter @EAPetrovich.

Editor’s note: A previous version of this article implied that the extermination of a prairie dog colony at Lemay Street and Buckingham Street was definite. The Collegian has corrected this error.