By the numbers: College of Engineering 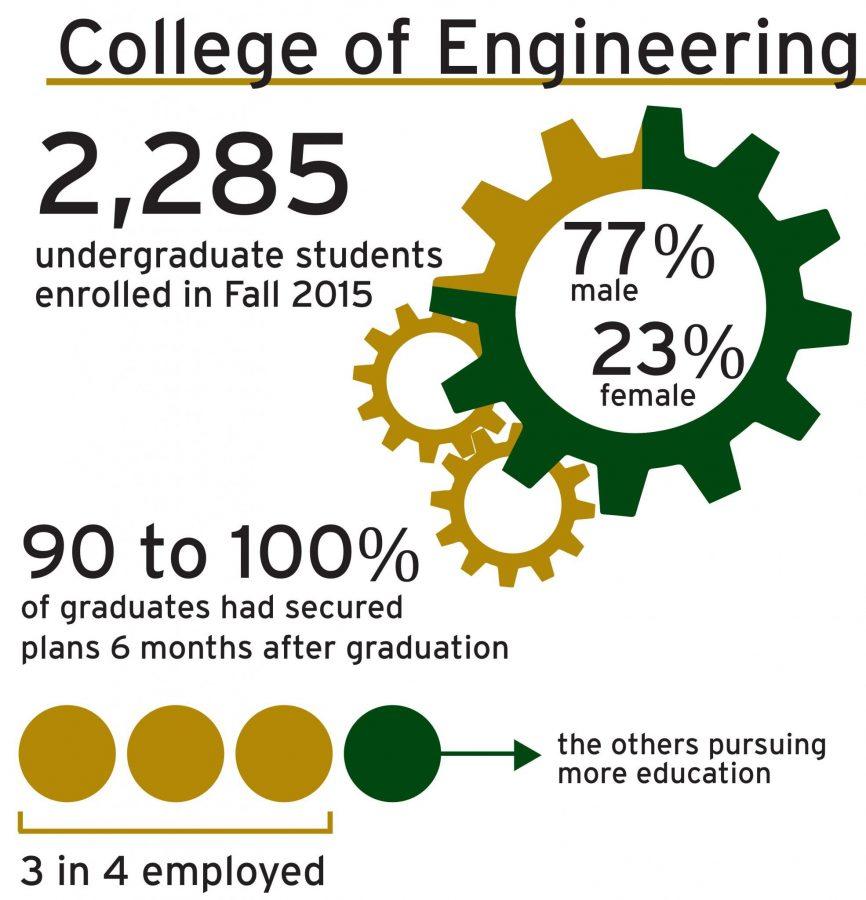 Colorado State University engineering students can expect to make an average of $55,000 out of college, according to the 2013-2014 First Destination Report.

About 90 to 100 percent of engineering students had secured plans six months after graduation, with about 75 percent employed and the other quarter choosing to continue their education.

The college has a little over 2,500 students enrolled, with about 25 percent of them women.

Much of this post-grad success can be attributed to the college’s dedication to providing students with resources.

Mechanical engineering senior Ryan Dunn said that he struggled his freshman year, but now that the size of his classes has dropped, he has found it much easier to get help.

“Once you get out of the big core classes … the class sizes drop a lot and it’s a lot easier to find help from teachers,” Dunn said. “But before that, it is almost impossible to get adequate help without hiring an outside private tutor.”

Senior civil engineering student Meredith Favero said the engineering school has a lot of resources for students, including an engineering-specific career center, the Engineering Success Center, where students can review their resumes and do mock interviews with people from the industry.

“Essentially what they do is help students get jobs,” Pool said.

All engineering students are required to complete Professional Learning Institute courses. These courses are offered by the college and topics range from ethics to leadership to public engagement.

“We learn about what professionals are doing nowadays and how they’ve gotten to where they are,” Favero said.

Dunn said that the engineering school teaches students how to solve problem and how to think outside the box, since most graduates will go through training at whatever job they get out of college.

Favero served as the president of the American Society of Civil Engineers at CSU in this past year. As president, Favero said she was able to network within the industry because she was in charge of bringing guest speakers to talk to the organization once a month.

Pool, who served as vice president for the ASCE, said he enjoyed hearing from professionals because it gave him an idea of what he would be doing after graduation.

“I think I made a lot of strong connections and also made a lot of working engineers as well, it was a great opportunity,” Pool said.

Mahli Ruff, a senior biomedical and mechanical engineering student, is the president of the Biomedical Engineering Society, where they do networking events, site tours and resume workshops.

Ruff said that when she declared biomedical engineering as a freshman, she was required to pick a partner major, which turned out to be mechanical engineering.

“It’s pretty broad, and that’s kind of been hard because you go through it and, at least with these two majors, it’s hard to figure out what you want to do,” Ruff said.

Dunn said that getting a job in the field often depends on who you know.

“I don’t have a great GPA — it’s competitive,” Dunn said. “For people like me to be competitive, it’s who you know and being personable.”

Pool said that the college provides resources for students, but it is up to the individual to take advantage of them.

“No one can really push you into a job — you kind of have to, at some point, take your own initiative and make it happen,” Pool said.

Ruff said that she has had internships with two biomedical companies, where gained useful experience because she was able to pick up on some of the terms and language used in the industry, as well as the federal regulations in the industry.

Dunn said he is graduating in the spring and has decided to take a break instead of looking for a job right away.

“I’m going to try and go to Winter Park and work with the Paralympic Ski team, because I want to go into making prosthetic limbs,” Dunn said. “After six months to a year I’ll go try to get a job, preferably not in oil and gas.”

Collegian Breaking News Editor Sady Swanson can be reached at news@collegian.com or on Twitter at @sadyswan.