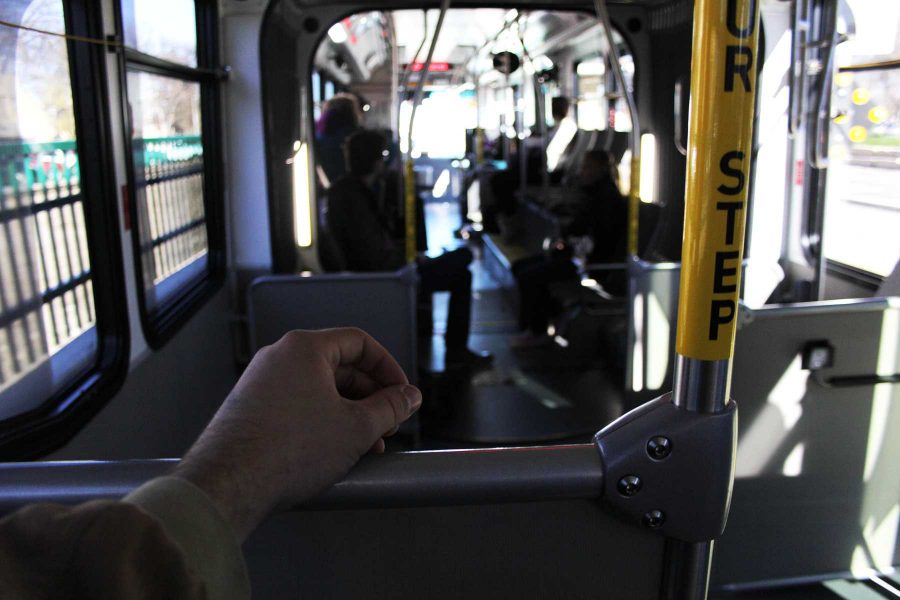 The MAX Bus slowly pulls up to the University Station on campus. It was a Wednesday morning and the MAX had places to be and people to shuttle. Studnets and non-students alike, ride the MAX everyday. Photo by Kevin Olson.

When the MAX services were launched May 2014, city officials believed five buses would be required during peak service. However, at the end of the MAX’s inaugural summer, it was clear to city officials that for the MAX to operate efficiently, seven buses would be needed. MAX ridership by students has almost doubled since the same time last year, said Aaron Fodge, director of alternative transportation at CSU.

After federal grants were retracted, which were originally dedicated to go toward the two additional buses through the MAX Capital Project, the Fort Collins City Council voted to appropriate nearly $1.7 million from local funds toward the payment of two new MAX buses. To cover the cost of the additional buses, the city dipped into reserve funds tagged for transportation and transit services after the Federal Transit Authority withdrew financial aid in April.

The primary issue causing delays proved to be slower travel times through major intersections than had been anticipated, said City Councilman Ray Martinez. He said the additional buses, which arrived from the manufacturer in August 2015, have improved headway time for the MAX Transit System, providing riders with a more consistent frequency of service.

Fodge said that students should utilize the MAX services, since their student fees go toward alternative transportation in the city.

“Out students should be applauded for riding,” Fodge said. “They are leaving the cars at home.”

“There would be times I would walk up to the stop only to realize my bus had a 15 minute delay,” Travis said. “Now, riding the MAX, I’m hardly late.”

The two additional 60-foot buses were purchased to meet the contractual agreement between the city and the FTA, which mandated 20-minute trips from one end of the system to the other. After being given FTA clearance in September 2014 to purchase the buses, Martinez said he and other city officials were surprised by the cancellation of support.

“The FTA had initially planned on paying for the additional buses, but they decided to cut funding,” Martinez said. “The city had already ordered the buses so we got held responsible for the bill.”