Students protest teachings of speaker brought to LSC by RamCatholic 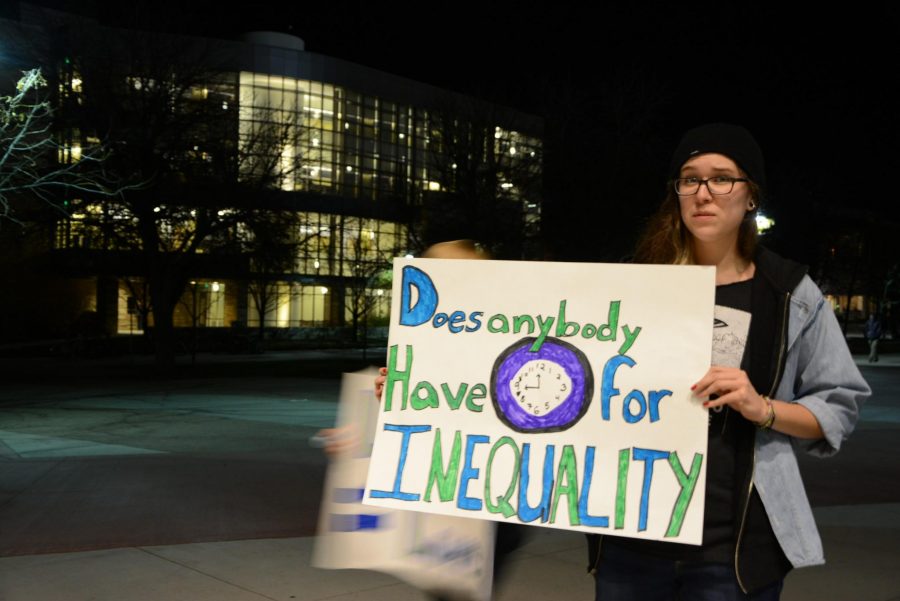 A video of the talk given Nov. 9 from the RamCatholic Youtube channel.

Ryan T. Anderson is a Princeton-educated, well-known speaker who has written books, been cited as part of the dissenting opinion of the Supreme Court during the 2015 ruling on gay marriage and appeared on CNN to debate his views. Monday night in the Lory Student Center, he gave a speech that was billed as “Redefining Marriage.”

But, not all CSU students felt comfortable with his presence on campus, and some held a protest.

One of the lead students who helped organize the protest is Nicholas Delgado. He feels that Anderson’s presence on campus is contradictory to some of the standards set forth by the Lory Student Center.

“When I heard about this guy coming to campus, I knew we needed to do something about this because this is not OK,” Delgado said. “And, the fact that it is being held in the building, the building even says that any event corresponding to discrimination based on sexual orientation or religion, will be prohibited.”

The event was held by RamCatholic, an on-campus ministry at CSU whose website says the organization supports the spiritual development of students during a critical, transitional time in their lives.

“RamCatholic seeks to boldly communicate to faculty, staff, and students of Colorado State University the social, humanitarian, moral and spiritual teachings of the Catholic Church,” wrote Leanne Tracy, the associate director of Campus Ministry at CSU, in an email to the Collegian. “Dr. Anderson fits this goal.”

Tracy said she wanted to make clear that this event is not meant to be discriminatory in any way.

“We understand that this topic is emotionally charged and very personal,” Tracy wrote. “We are not homophobic, and most of us have loved ones who have homosexuality in their lives. We are merely seeking to communicate the teaching of the Catholic Church in regards to the definition of marriage.”

Delgado mentioned that Anderson’s well-known belief of conversion therapy, a form of therapy aimed at converting homosexual individuals into heterosexuals, is particularly offensive and in violation of this policy. The Lory Student Center website policy page states that, “Colorado State is committed to providing an environment free of harassment and other forms of discrimination based on race, age, color, religion, national origin, gender, sexual orientation, veteran status, and/or disability.”

“It doesn’t feel fair because I see this, and so many other students see this, as a problem,” Delgado said.

The advertisement for the speech contains a picture of two people holding hands without any indication as to the gender of either individual, and Delgado felt that this was misleading to students who viewed the ad.

“What made me angry too was seeing how they advertised it — it was very misleading, because the cover picture is just two genderless people who are holding hands and it just says ‘Redefining Marriage,'” Delgado said. “I feel like someone who looks at it from the surface could just be very mislead about whats really going on.”

Delgado and the students planning the protest are not protesting the event, but rather, trying to stand up together for their ideals and provide a safe haven for students who do not feel comfortable with Anderson’s speech.

“We are trying to create an area of safety on campus while this event is going on,” Delgado said. “We just want to be able show students what this event is actually about, and also to address that having an event like this on a campus with such a large variety of people can alienate a lot of people. It’s not fair to have something so hateful on campus that excludes so many people.”

Despite the backlash RamCatholic has incurred by Anderson’s presence, Tracy said they do not plan to shy away from bringing in controversial speakers in the future.

“It is our goal to equip students with the knowledge of the teachings of the Roman Catholic Church and why it holds those beliefs,” Tracy wrote. “In the future, we will continue to invite speakers who effectively communicate these beliefs.”