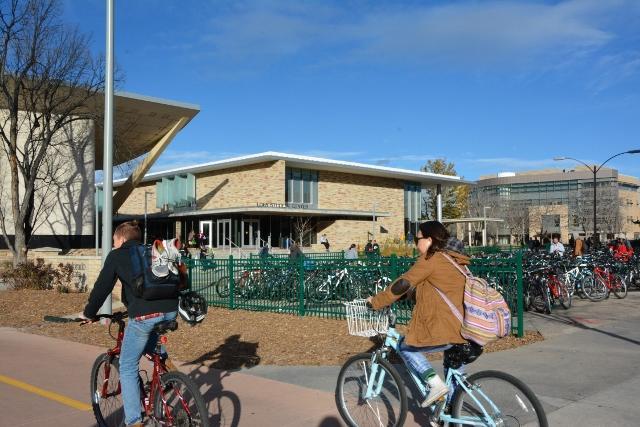 Over the past few weeks, those traveling between the Lory Student Center and the Morgan Library may have seen the updated bike parking lot on the edge of the Plaza.

Colorado State University’s Alternative Transportation manager Aaron Fodge said the bike parking lot project, which was completed earlier this month, aimed to eliminate or reduce the amount of ice that forms under those bike racks in the winter. The metal fence, Fodge said, is solely decorative.

“A new stone garden will collect water that flows off the (Morgan Library) roof and collects under the racks,” Fodge said.

University landscape architect David Hansen said the ice that tends to form under the racks presents a significant hazard.

“The construction that you have seen on the north side of the library is an attempt to correct an unsafe condition in the winter,” Hansen wrote in an email to the Collegian. “The constructed channel should capture this snow melt and direct it to a new drain. If it freezes, it is contained in the channel where pedestrians aren’t needing to walk.”

In addition to safety, aesthetics are an important aspect of the bike parking areas around campus, Fodge said, mainly because there are just so many of them.

“Additional landscape improvements will occur in the spring on the west end adjacent to the campus monument sign, creating a vibrant, colorful entry,” Hansen wrote.

The fence and landscape improvements around the bike parking have long been in the works to improve the appearance of the entrance to the pedestrian mall, and as with each campus construction project, considerable planning and care went into the design, according to Fodge.

“We don’t want to put something up that’s going to be ugly in five years, and… we want it to be cost-effective,” Fodge said.