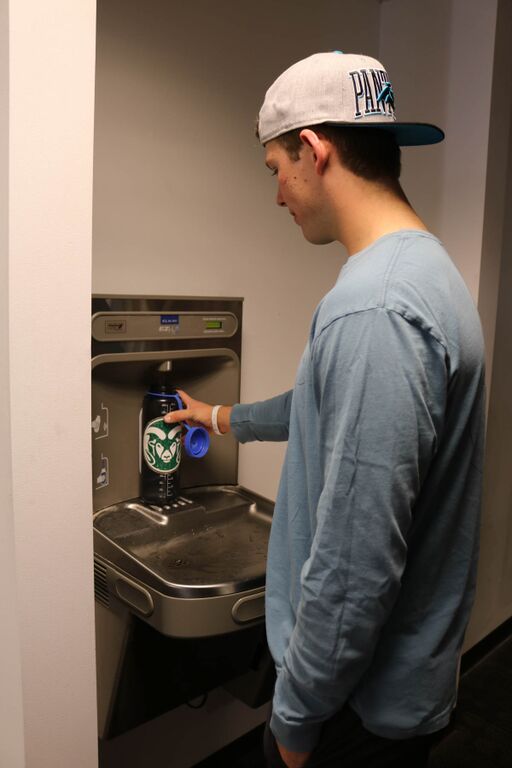 It would take 100 gallons of oil to produce to amount of plastic bottles eliminated by the Morgan Library this past year.

Water bottle refill stations in the Morgan Library have prevented the use of 236,000 plastic bottles between September 2014 and September 2015, according to data from Campus Energy Coordinator Stacey Baumgarn. In that time, the library’s six Elkay EZH2O fountains pour an average of 650 refills of 16-ounce water a day.

Initially, only four Elkay EZH2O stations were implemented during the 2012 Morgan Library renovation: two in The Cube and one on each of the first and second floors. The fountains are designed to minimize dependency on disposable plastic bottles. Chairperson of the Morgan Library Sustainability Program Neyda Gilman said two supplementary units were added on the first and second floors in 2013 to quench popular demand.

“Faulty would walk around and see students struggling to fill up their water bottles from the (traditional) drinking fountains,” Gilman said. “The ease (of the newer fountains) helps get people using them.”

In September of 2014 there were 31 stations on campus, Baumgarn said. Colorado State University currently has 56 water bottle filling stations in 21 buildings around campus — the increase in water bottle refill stations can be attributed to Housing and Dining Services implementing them in residence halls this past year.

One of the most frequently used stations on campus is located centrally on the library’s first floor, with an average of 330 refills per day throughout the 12-month period.

“It’s a convenience thing,” Robinson said. “Refilling your water bottle should have always been this simple.”

Robinson said he appreciates CSU taking steps toward sustainable water consumption. Nationwide, just 25 percent of single-use plastic bottles are currently recycled; the other 75 percent end up as landfill, Baumgarn said. Additionally, it takes 42 ounces of water to produce one 16-ounce single-use plastic bottle. Gilman said many do not consider how much water is wasted bottling water.

“Not only do you have the bottle itself wasteful, but you also have the waste of the water,” Gilman said. “We don’t need to bottle our water, we get it through our plumbing.”