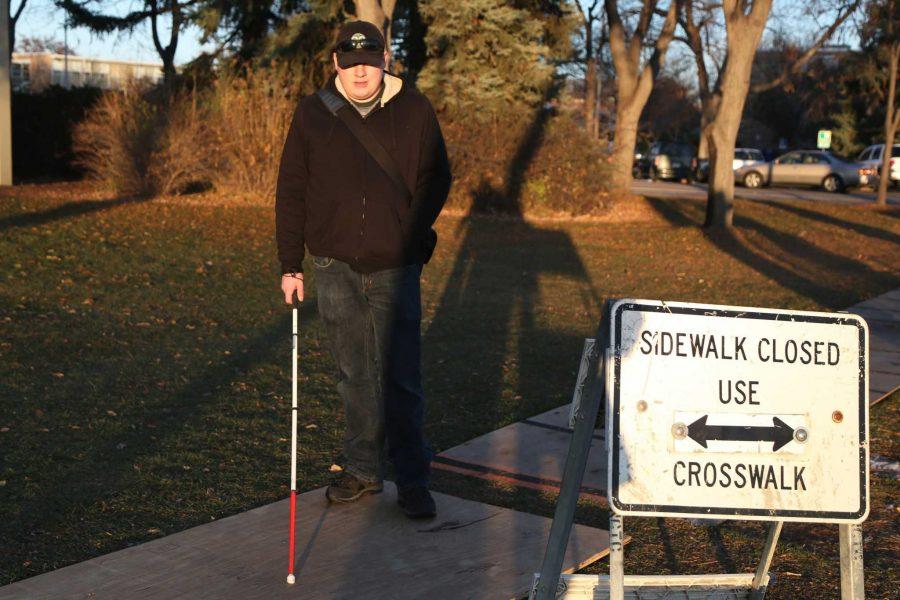 The construction on Pitkin street closed two sidewalks, leaving makeshift pathways off to the side. Joe Tiner explains how this is difficult for some people to walk through leaving them frustrated. (Photo credit: Amanda _).

Construction on campus has affected accessibility for some students with disabilities, particularly when it affects a daily route.

Pitkin Street currently has only one sidewalk open on the north side due to the construction of the stadium. Prior to Thursday, sections of the north sidewalk were also closed. The contractors placed plywood as a makeshift sidewalk during that time, but it was not as accessible as it should have been, said Joe Tiner, senior journalism major and student intern at the Resources for Disabled Students Office.

“I’m visually impaired, so it is very difficult to navigate around a fence or other changes,” Tiner said. “I know my route, and I know where things are. When you put up something that changes my route, I don’t know where anything is. Also, the temporary sidewalks had a few places that ended in the grass with a step down. It was not accessible for someone in a wheelchair.”

By Thursday evening, the problem was resolved because the contractor opened the north sidewalk completely after their work was done. The University has also implemented a crosswalk for pedestrians to use from where the south sidewalk ends over to the north sidewalk. However, this crosswalk is not yet fully accessible, as it begins and ends on curbs.

“It (accessibility) needs to be a forethought, not an afterthought,” Tiner said. “We (CSU) do a really good job of trying, but I think there is room for improvement.”

The University works with the contractor to ensure construction meets Americans with Disabilities Act (ADA) standards, said Fred Haberecht, campus planner for Facilities Management. They also meet with the primary planning staff, representatives of parking services and representatives of residence halls. In addition, Rosemary Kreston, the director of Resources for Disabled Students, reviews each project.

“Each project is unique,” said Haberecht. “We first make sure that we are maintaining the area’s accessibility according to ADA code.”

A few places on Pitkin Street have also been recently paved to smooth paths that were previously inaccessible.

As construction increases, accessibility is affected when routes are closed.

“An issue our office (RDS) has been facing is that as a result of certain streets being blocked off, we have had to cut down on our rides for students with short-term or long-term disabilities that can’t get to class,” Tiner said. “So, that has affected our office in trying to provide access.”

The University’s goal is to keep as many routes as open as possible during construction, Haberecht said.

Collegian Reporter Erin Douglas can be reached at news@collegian.com or via Twitter @erinmdouglas23.