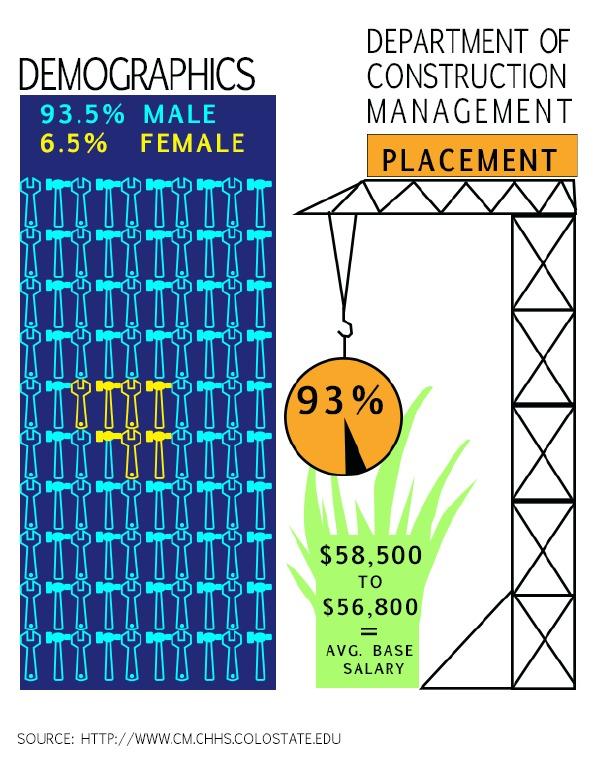 With nearly a 100-percent job placement rate, 12 student organizations, professional industry involvement and community outreach, Colorado State University’s Department of Construction Management may have a bit to boast about. It was one of Colorado’s first three construction management programs and is the only one accredited by the American Council of Construction Education.

This year, 93 percent of spring CM graduates are employed in the industry, according to data provided by the Phelps Placement Office.

With the exception of some students who choose to forego the placement service or have a change of heart about their career in construction, nearly every student finds a job within six months after graduation, said Anna Fontana, Phelps Placement Office coordinator.

“We work with them until they’re placed, so they’re all placed within that six months if they want to be,” Fontana said.

Graduates have a fundamental understanding of multiple disciplines such as architecture, business, engineering and leadership.

“It’s not that at all,” Fontana said. “A lot of our students may leave here and never really build anything of their own hands. They’re managing the process of construction on large-scale projects.”

The CM program has traditionally attracted fewer female students, according to Fontana.

“It has kind of steadily been 10 percent, plus or minus a percentage point,” said Fontana. “Well, we had a huge class of females graduate two or three years ago … and our numbers tanked.”

Today, 6.5 percent of the CM program students are female.

A couple of years ago, the department hired a full-time academic adviser, who currently spends 50 percent of their time working on the department’s diversity initiative.

When CM graduates do find their entry-level job, they can expect to earn an average of $56,800 to $58,500, according to Phelps Placement Office data.

The CM program focuses on leadership and allows students unique access to real projects, many of which can be seen around campus.

“All of the companies that are working here on campus hire our students all the time,” Fontana said.

Five CM interns participated in the Aggie Village project, and more are expected to participate in the on-campus stadium construction.

The construction industry, which many professionals left after the 2007-2008 economic crisis, now has a labor demand that exceeds supply.

In fact, construction may be one of the few fields where students have the luxury of politely declining a job when they know it is not a perfect match. That is what senior Sean Howell did when he realized that a job he was interviewing for was not the right fit.

“I don’t think there are very many other graduates who can do that,” Howell said.

Howell said there was no lack of inquiries from recruiters when the time came to look for summer internships. Before joining the CM program, Howell, who already has a degree in political science, spent eight months looking for work after serving in the Air Force.

“I’ve had three internships at my time at CSU with different companies,” Howell said of his time as a CM student. “Every summer, it’s getting calls.”

As for future market shifts, Howell remains positive — there are “stable enough, big enough companies that they can weather crashes,” he said.

Collegian Reporter Eleonora Yurkevich can be reached online at news@collegian.com.