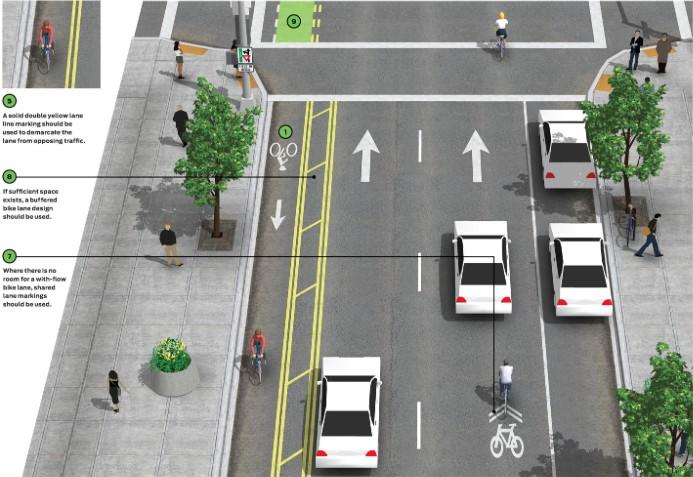 A contraflow bike lane was finished Oct. 16, allowing students to travel both with and against traffic on East Drive, which was previously a one-way road near the Oval.

The contraflow bike lane is designed with a three-foot buffer in order to slow oncoming traffic and allow bicyclists to ride in both directions, said Colorado State University Alternative Transportation Manager Aaron Fodge.

“Our campus has such a high quantity of people riding bikes — we are on the forefront of innovation and trying to figure out creative ways for people to travel, and of course, safety is always a concern,” Fodge said.

East Drive normally contains a high volume of bike users, as it leads to the center of campus. Officials decided to change this one-way road in order to improve the safety and efficiency of biking on CSU’s campus.

This re-striping project has been helpful to many students because they are no longer required to walk their bikes on sidewalks or ride completely out of their way in order to follow the rules of the road.

“I work at Resources for Disable Students, so in order to get there, I can cut through the construction, which is really important,” said Ruby Hornback, a senior who is studying psychology.

Fodge believes the inclusion of a “sharrow,” an arrow that allows both bikes and cars to ride in one lane, will help stop unnecessary enforcement on one-way roads near the Oval.

“There are going to be some concerns for folks that aren’t as familiar with the rules of the roads in terms of riding bikes,” Fodge said. “If you want to go in both directions, you are expected to ride with traffic.”

Officials have responded to students asking for re-striping in order for these roads to adapt to the high volume of bicyclists trying to ride in both directions of traffic.

“I actually do like it a little better, because I work right at Facilities and it’s easier to go straight up (the road),” said Dillon Maxwell, a CSU alumni working in Facilities Management. “I also like the fact that bikes now get a full lane on the Oval too.”

Fodge emphasized that bicyclists are faced with a fee of up to $35 when riding on campus on sidewalks parallel to bike infrastructure. He hopes for other one-way roads on campus, such as Amy Van Dyken Way and South Street, to be re-striped so bikers can travel with or against the flow of traffic.

Collegian Reporter Savannah Hoag can be reached at news@collegian.com or on Twitter @sav_hoag.