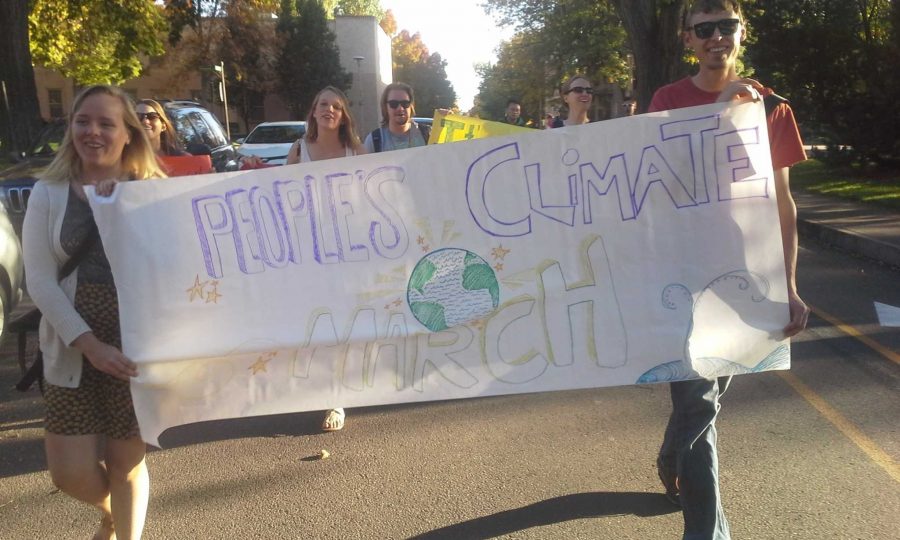 Climate change advocates marched from the stump to the oval and back again Wednesday. (Photo credit: Sierra Cymes)

Passionate chants of dissatisfaction rang from the Oval Wednesday from climate change awareness group the Climate Reality Project in an effort to call Colorado State University students to action against global warming. The march also commemorated one year since the People’s Climate march in New York City, which  garnered more than 300,000 participants.

After a speech from ecosystem science major Rachael Baiyor, an intern at the Climate Reality Project, fellow activists marched with posters and signs from the stump to the Oval, where they stood outside the administration building in a statement against ignorance, Baiyor said.

Baiyor’s speech rallied some passing students to join the march, which traveled around the Oval and ended back at the stump.

One chant that stuck out to senior environmental communications major Max Roece was, “we put our earth in peril whenever we pump a barrel.” For Roece, the march was an important opportunity for student voices to be heard.

ASCSU Assistant Director of Environmental Affairs Griselda Landa-Posas joined the march after hearing about it only that morning. Landa-Posas said she had a personal stake in the fight against climate change, as she has been close to the earth for her entire life.

“Environmental issues have always been a part of my life, my parents both grew up in a small little farm, so we were always really connected and close to the earth,” Landa-Posas said. “I grew up in an urban area. I feel like it’s something we take for granted sometimes.”

Baiyor said it is important to recognize local efforts as part of the greater effort to fight climate change, a goal shared by the Climate Reality Project.

Collegian City Beat Reporter Erik Petrovich and News Reporter Sierra Cymes can be reached at news@collegian.com or on Twitter @EAPetrovich and @sierra_cymes.