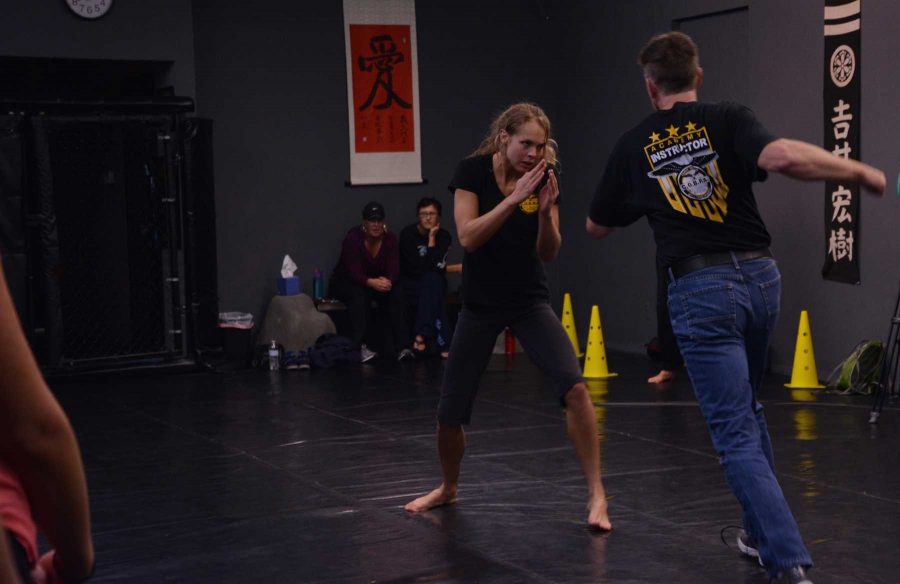 Instructors at The Dojo show thier class self defense techniques they will learn in the following classes. The first C.O.B.R.A. self-defense class of five was held Monday. (Photo Credit: Megan Fischer)

With the goal of keeping the community safe, C.O.B.R.A. Fort Collins offers two five-week self-defense classes for all ages at The Dojo.

The class started with a small talk about why self-defense is important and why everyone was there.

“The most important thing for people to take away from the class is just the feeling of empowerment that the class will give them,” said Silas Beaner, one of three co-owners of the school and a CSU alumnus. “The mindset that we really are trying to instill on the person is don’t let anyone push you around or be self-targeted.”

Brenda Treuthardt, who attended the event, said she decided to take the class because of past experience and because it was worth it. She said she learned something from the class.

“I’m always kind of broad and self-assured, but it’s the yelling — I never thought that my voice would scare somebody off,” Treuthardt said.

Randall Brown, head instructor and co-owner of the studio, started looking into self-defense programs after the shooting at Sandy Hook Elementary School.

“I never would teach self-defense in any of my schools because I don’t believe a person can normally learn to defend themselves in a matter of weeks or hours,” Brown said. “After that happened, I was just so disgusted. I started looking into it and I wanted to leave no stone unturned, so I looked into everything I could find, and it’s the first thing I’ve seen that I’ve really believed in other than long-time training.”

“My favorite part of the C.O.B.R.A. training is the empowerment that people come away with,” McLaughlin said. “A lot of people come into the training because they were scared or something happened and by the time they’re done with it, they feel they know exactly what to do of something would happen again.”

Her sister, Anne McLaughlin, the yoga instructor at the school, helped with the class and spoke about the importance of knowing self-defense.

“We don’t want to scare people,” Anne McLaughlin said. “The idea is to get people to be prepared, and to have that awareness so that you can move through your life with the ability to defend yourself.”

Collegian International Reporter Megan Fischer can be reached at news@collegian.com or on Twitter @MegFischer04.