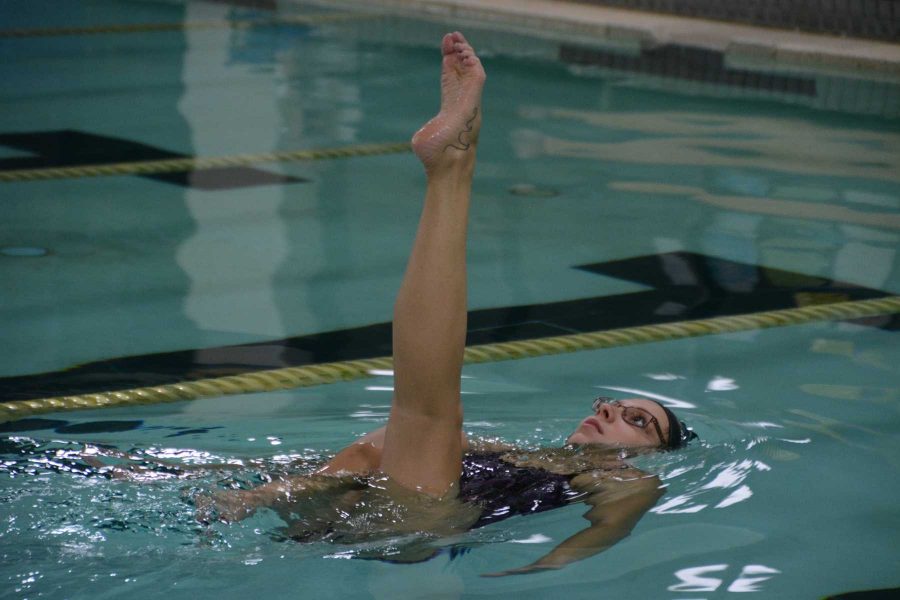 Neuroscience major Sasha Boudko warms up with her foot in the air during synchronized swimming practice at the Dick-Hewson Aquatic Center Monday. (Photo Credit: Megan Fischer)

The Colorado State University synchronized swimming team fought to keep practicing in the Recreation Center after issues over possibly dangerous hypoxic training caused the Office of Risk Management and Insurance to revoke their ability to practice on campus.

Hypoxic training, or “breath-holding” training, is a type of swimming training where activities are performed while the athlete holds their breath for an extended period of time, according to the director of the Office of Risk Management and Insurance, Sally Alexander.

“Hypoxic training becomes especially dangerous to even the elite swimmer when coupled with voluntary or involuntary hyperventilation,” Alexander wrote in an email to the Collegian. “Excessive hyperventilation can delay the urge to breathe so long that the person can lose consciousness due to low O2 levels with absolutely no warning.”

Fifth-year senior and synchronized swimming assistant coach Rachel Minor said CSU’s hypoxic training policy states that one is not allowed to swim entire lengths of the pool under water without taking a breath.

“People who hyperventilate and then try and hold their breath drown a lot quicker than people who don’t because your body is already oxygen-deprived,” Minor said.

Because synchronized swimming participants are not necessarily swimming laps, Minor said CSU’s definition of hypoxic training did not make sense for their sport, therefore making it harder to tell what the team is and is not allowed to do.

Minor said she received an email in early September stating that the team would not be allowed to practice on campus because their practices did not comply with CSU’s hypoxic training guidelines. The remainder of the team’s practices on campus were canceled.

“We were concerned that the synchro team would be performing activities such as ‘under-overs’ and breath-holding (for the length of the pool) would lead to hypoxia,” Alexander wrote.

Minor said she sent many emails asking for more details on what hypoxic training is and asking for administration to work with them on the issue so the team could continue practicing on campus.

After not receiving a response, Minor asked the team’s faculty advisor, Jen Krafchick, to reach out in hopes of hearing back. After Krafchick emailed, Minor said they were able to get a meeting scheduled.

“I was very worried that the synchro team would not be permitted to continue at CSU,” Krafchick wrote in an email to the Collegian. “I really want to see synchro remain an opportunity for current and future students at CSU.”

Minor said they had a meeting with the Office of Policy and Compliance Sept. 24 to work through the problem.

“The ultimate conclusion that we came to was we can’t swim full lengths underwater without taking breaths,” Minor said. “They’ve agreed that they’re going to review what the Rec Center policy is and elaborate a little bit on what (hypoxic training) means.”

Alexander wrote that during the meeting, a clearer understanding was established of what acceptable practice techniques are, and that the policy manual will be updated to make a clearer definition of what hypoxic training is.

“We’re going to modify our practices so we don’t do that (hypoxic training), which is not a big deal,” Minor said. “I don’t necessarily feel like we needed to meet with (the Office of Policy and Compliance) to figure that out, but I’m glad that we met and that we’re all on the same page.”

Krafchick wrote that their main concern is always safety, but she is happy that they were able to solve the problem so students can continue to enjoy participating in the sport.

“It was a very productive discussion and I think we all learned a lot from each other,” Krafchick wrote. “I was very pleased that we were able to reach consensus.”

Since early September when this issue first arose, the team has not been able to practice on campus and has been practicing in Loveland. Now that the issue is resolved, the team is allowed to practice in the Recreation Center pool again, but they must reschedule all of their practices.

“If we have to drive to a pool at Loveland twice a week, we’re not going to get new recruits,” Minor said. “It’s stressful enough as students trying to find time to have a sport, but the having to drive an hour to practice every single practice … it would’ve been so bad for our team.”

Minor said that synchronized swimming is a dangerous sport because participants are required to hold their breath for a long period of time and they often get kicked, hit or landed on.

“But it’s also a lot of fun — it’s really rewarding and there’s a lot of teamwork and we’re all very close with our teammates,” Minor said. “So it’s very important for us to keep our team whole, and being able to practice is a huge part of that.”