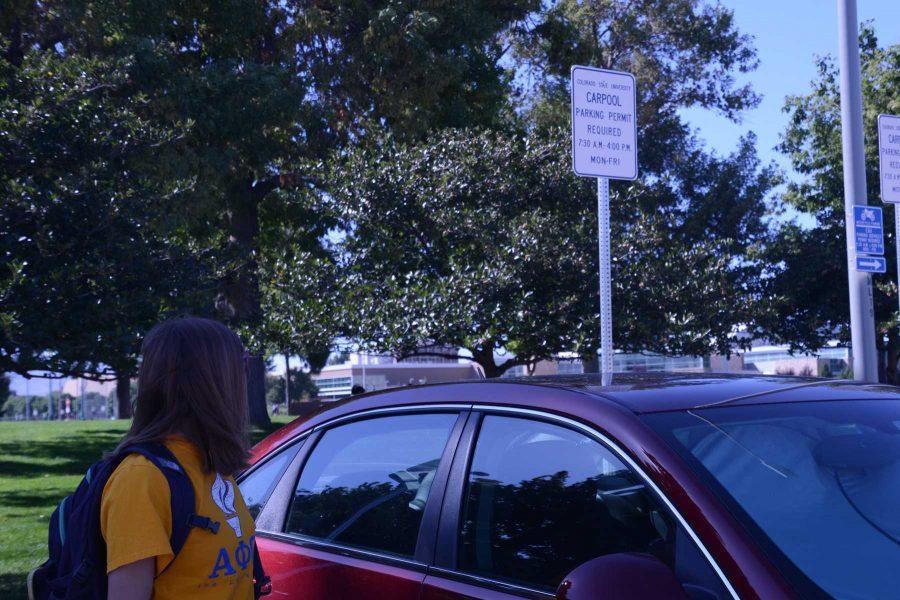 Students can save money getting to campus by getting a carpooling pass. By doing this, they are committing to driving into school with two or more people. (Photo Credit: Megan Fischer)

Parking Services at Colorado State University is offering alternative parking permits that are designed to save commuters money and encourage environmentally-friendly travel.

With the loss of parking on campus due to construction, people are making different decisions on how to get to campus, according to Alternative Transportation Manager Aaron Fodge.

“For some people, they might be trying not driving for the first time,” Fodge said. “One of the biggest barriers for them when they decide not to drive is ‘what happens on the days when I really need to drive?’”

Fodge said faculty and students requested a pass with more flexibility, so they could drive to campus when necessary, but not have to pay for a full pass.

From that feedback, parking services created the commuter pack, which offers 10 daily permits for the price of nine, or $90, according to Fodge. The hangtag permit allows users to scratch the date off and be paid for the entire day. Single day passes are also available from the parking services office for $10.

Director of Environmental Affairs for Associated Students of Colorado State University Dakota Truitt said the flexibility of the commuter pack is great for students.

“There are those people (who) only want to drive eight days or 10 days a year and that’s going to be spot on for them,” Truitt said.

The commuter pack passes carry over into the next semester, or until all 10 days are used.

Fodge said students cannot buy the commuter pack if they already have a separate annual or semester pass. The only exception is if they are a part of a carpool pass and foresee wanting to drive separate from the carpool some days.

Associate Director of Finance and Administration at CSU Parking Services Brian Grube said the passes from the commuter pack are valid in any commuter or Z lot.

“Say each of you (in the carpool) has a car,” Fodge said. “You can put each of those three cars under the same permit and split that $407 dollars.”

While each car in the carpool has a permit, no more than one car per each carpool permit is allowed to be parked on campus at the same time, according to Fodge.

When students sign up to get a carpool permit, they can request where on campus they would like to park. Students with carpool permits can park in designated carpool spots around campus, Fodge said.

“We want to incentivize (students) by giving (students) a better place to park because (they are) saving parking spots on campus,” Fodge said.

According to Grube, those with carpool passes can park in any commuter lot or in the designated carpool spots currently located in the Morgan Library, Lot #332 by Alder Hall, or the lot near the weather station and Transit Center.

“We really want to start trying to put these where people want them,” Grube said. “The more demand that we have, the more we’re going to put in.”

When students make the request of where they would like to park for their carpool pass, Grube said parking services looks at that area to see if adding a carpool spot is realistic.

Parking services has stopped selling carpool permits this semester, but students can buy them for next semester in January.

“The only reason the prices are a little different is that the pricing is usually based on how long they’re on campus,” Fodge said.

He said the monthly permits may be popular for the winter months when people may not want to ride their bike every day. To get any permits, students and faculty must visit the parking services office on Lake Street.

Collegian Assistant News Editor Sady Swanson can be reached at news@collegian.com or on Twitter at @sadyswan.