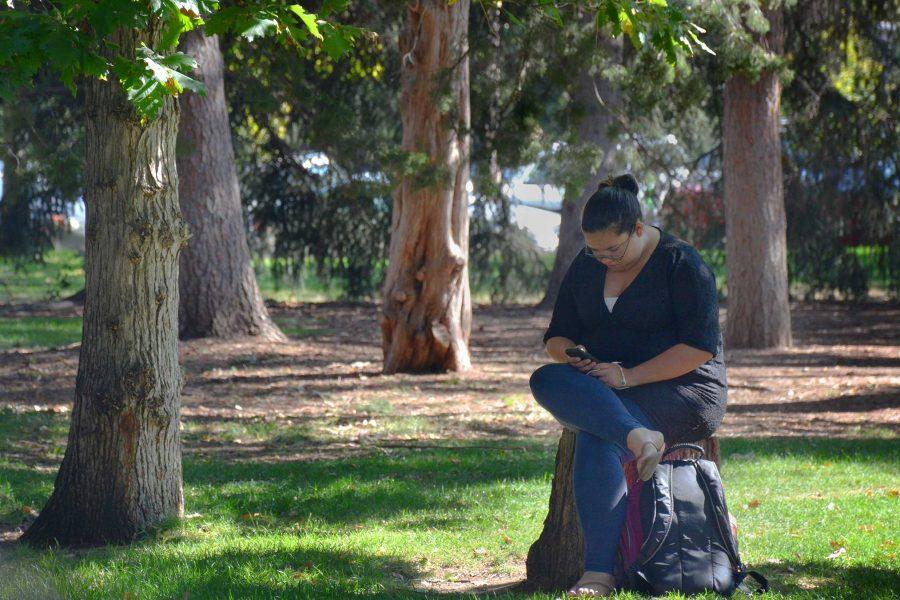 Zoology major, Octavia Cordova, relaxes on a stump in Sherwood Forest between classes on Wednesday morning.

Every tree native to Colorado can be found in Sherwood Forest, located between the Warner College of Natural Resources and the Forestry Building.

Incoming freshmen hug trees there during orientation. Students can study under the shade of the various trees. Faculty are able to hold class amidst the trees.

Many students said they do not know why Sherwood Forest has its name.

“I think it’s named after something from a Disney movie,” said Stephanie Thompson, a freshman studying biochemistry.

The name “Sherwood” comes from a professor who used to be part of the Forestry Department, and not from the Robin Hood legend and Disney movie, according to Fred Haberecht, a facilities management employee.

“What we know from the master plan and some historical records is that around 1949, after World War II, as the campus was developing its master plan, that area was identified as an arboretum and a campus demonstration garden,” Haberecht said.

Sherwood Forest has been on campus for over 60 years.

“The only way (Sherwood Forest) is growing today is memorial trees,” Haberecht said. “Folks, especially in the Warner College and Forestry, have requested to plant trees for people who have been involved in that college.”

As Sherwood Forest grows with the addition of new memorial trees, there have been losses — with both trees and students.

“We’ve lost some substantial trees, like a big Ponderosa Pine in a snowstorm in 2003,” Haberecht said. “Tragically, we also lost two graduate students with a lightning strike about seven years ago.”

In 2013, ASCSU added “Hug A Tree in Sherwood Forest” to the list of 70 things that every student at CSU should do before they graduate. Some of the trees that can be found in Sherwood Forest include: evergreen, blue spruce, Ponderosa pine, Douglas fir, basswood, American elm, bur oak and honey locust.

“Sherwood Forest is a unique place on campus because it is right in the middle of campus, but it is a real intimate, primeval forest because of the maturity of the trees,” Haberecht said. “It’s surrounded mostly by buildings on three sides, and that its visible from the street.”

Collegian Reporter Savannah Hoag can be reached at news@collegian.com or on Twitter @sav_hoag.